England Head Coach Danny Kerry said he was “proud” of his players after England negotiated their way past a stubborn Korea side to set up a Hockey Women’s World Cup quarter final with old foes, the Netherlands. A goal from Sophie Bray and a late strike from Lily Owsley did the damage in front of another packed house in London.

“I really enjoyed the first half we absolutely smashed it.”  a delighted Kerry told BT Sport.
“Being the coach I am I was frustrated we didn’t put the simple pass into the empty goal but other than that It was perfect. In the second half we lost some shape up front which meant we didn’t connect as well as we had before but we were fantastic in the first half.” 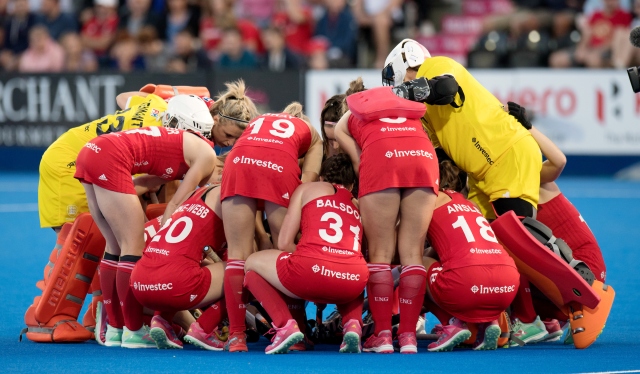 Kerry’s side could have been out of sight at the half time interval with Alex Danson drawing a good save from the Korean goalkeeper and England dominating possession and territory. As it was they had only Bray’s close range finish to show for their efforts, something that irked Kerry.

“I thought if we got the second we’d kill them. That’s why internally I was frustrated we didn’t finish the moves off. I knew we’d be cagey and fatigued in the second half. I’m a pretty proud coach, though because I knew despite their results Korea are a good side.”

Frustrations aside, the England coach drew far more positives than negatives, praising the way his team executed their gameplan by “taking away” Korea’s strengths.

“We didn’t allow them to set up big shapes. We forced them to play deep and in a way they aren’t used to, then we turned them over and counter-attacked. That’s what I was most happy about.”

Despite their dominance England were indebted to goalkeeper Maddie Hinch who pulled off a flurry of important saves late in the game before Owsley sealed it at the end, slotting into an unguarded net for her second of the tournament.

The win means England will take on old foes the Netherlands in the quarter final. Despite the Oranje’s free-scoring displays so far, Kerry claimed England will “have something up their sleeve” for that match which takes place on Thursday at 2015 BST.

Columnist for The Hockey Paper and the man behind The Top of the D. Writer, podcaster, goalkeeper and BBC Sport man. Used to work for Great Britain Hockey and have covered the sport at every major tournament.
View all posts by thetopofthed →
This entry was posted in Hockey Women's World Cup. Bookmark the permalink.