England vs Netherlands: “Anything can happen.”

Posted on August 1, 2018 by thetopofthed

“Games like this only come around a few times in a career and even fewer times on home soil in front of 10,000 fans.”

Lily Owsley has fond memories of playing in front of the crowd in London against the Dutch. It was her late equaliser in the EuroHockey Championship final at the Lee Valley Hockey and Tennis Centre which took the game to a shootout where goalkeeper Maddie Hinch excelled and England took a famous win – and the European title.

The Dutch have been in red-hot form in this tournament so far, winning all three of their games, scoring 26 times and conceding just twice in the process. England have by their own admission, struggled at times, including having to come through a crossover match against Korea to get to this stage.

However, Danny Kerry’s charges have history with the Oranje. As well as the afore-mentioned 2015 European triumph, a number of the squad were in the ranks in 2016 at the Olympics in Rio. After a pulsating 3-3 draw, lightning struck twice and Maddie Hinch’s goalkeeping heroics helped Great Britain to another famous shootout win. Owsley hopes that history is at the forefront of the Dutch minds:

“I don’t think they would admit it, but I guarantee the Dutch do not want to be playing us in the quarter finals here, given our history, given how we are playing and building.”

“Nobody is pretending we aren’t underdogs. The Dutch are brilliant and the number one side in the world. World No1 versus No2 with 10,000 fans cheering us on, anything can happen.”

Coach Danny Kerry has already said his side will “have something up their sleeves” for the Dutch but his goalkeeper, Hinch, a central figure in those two famous wins insists England should treat this no differently to any other match. 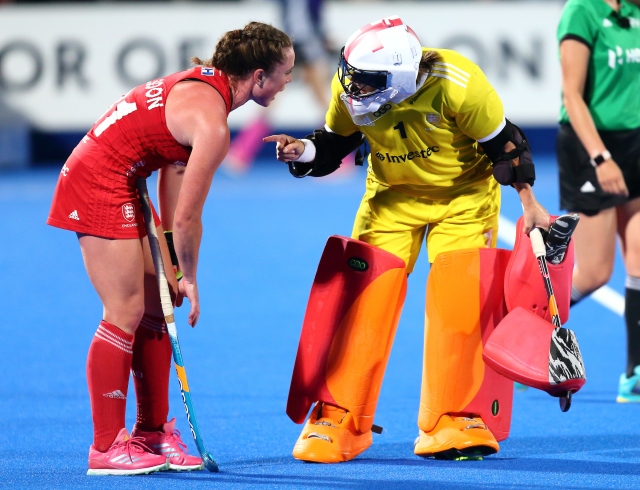 “We’ll prepare the way we prepare for all the other games. We know they score goals for fun but I think that’s exciting. I know the girls will be excited for this game too. We hadn’t thought ahead to the Dutch until now as it is a game by game process. We have a good history against them and we have to take that confidence into the game and see what happens.”

One game at a time. Process. History. Confidence.

England are saying all the right things, can they summon the Dutch courage to stop the World No1? We’ll soon find out!

This entry was posted in Hockey Women's World Cup. Bookmark the permalink.

2 Responses to England vs Netherlands: “Anything can happen.”