Unsworth urges Great Britain to ‘take a look at themselves’

Laura Unsworth said Great Britain need to “take a good look” at themselves after they slipped to a 4-2 defeat at the hands of Australia in the FIH Pro League.

Great Britain fell behind to strikes from Maddy Fitzpatrick, Brooke Peris, Jane Claxton and Mariah Williams and despite pulling goals back through Hollie Pearne-Webb and Tess Howard they were unable to avoid their ninth defeat in 14 games.

A devastating second-quarter flurry of goals from Australia put the contest beyond Great Britain. Maddy Fitzpatrick’s penalty corner was too powerful for Maddie Hinch and crept over the line in the 18th minute and then seconds later Brooke Peris latched onto a through ball and lifted it over Hinch to make it two goals in a minute. 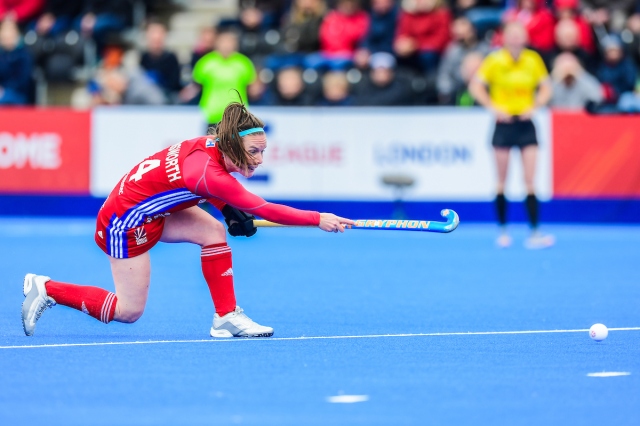 Mark Hager’s side were reeling and five minutes later it was 3-0. A shot from Jane Claxton took a deflection to wrong-foot Hinch and go into the back of the net.

GB were unlucky not to pull a goal back from a penalty corner as Jo Hunter’s deflection hit the woodwork and she was a fraction wide with the follow up but then in the third quarter, a neat finish from Williams made it 4-0 and put the points beyond doubt.

“We had more of the momentum in the first quarter but didn’t take advantage of it. They got a goal and then another straight away and we were 2-0 down but probably didn’t deserve to be. The game just got away from us.”

“Coming back from 4-0 down is a tough ask. We put our hearts into it and got back to 4-2 but we just need to take a good look at ourselves. Conceding four goals in international hockey, you’re putting yourself in a very tough position.”

With the game effectively over, Great Britain rallied and pulled back two goals in the final quarter. Pearne-Webb and Howard both slotted in penalty corner rebounds but it was too little, too late for hosts.

Unsworth, an Olympic gold medallist and a veteran of almost 250 international appearances told The Top of the D after the match:

“We have some important matches coming up. We can’t qualify from the Pro League now, but we have to use the remaining matches to prepare for the challenges we have ahead. The Olympic qualifiers are of paramount importance. We have a chance at the European Championships and then in November so all our focus has to be on those games.”