Posted on August 3, 2014 by thetopofthed 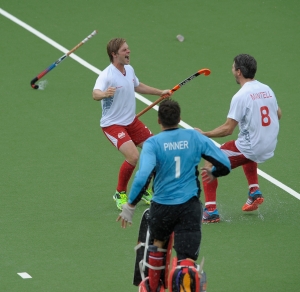 England held their nerve to pick up the bronze medal with a dramatic shootout win over New Zealand. The sides had played out an entertaining 3-3 draw over 70 minutes but with Blair Hilton and Simon Child unable to convert their efforts in the shootout it was left to England’s Ashley Jackson to net the winner and give Bobby Crutchley’s side the win.

England dominated the early exchanges but fell behind to a piece of individual brilliance in the 12th minute from Simon Child. The Blacksticks No6, who scored a late winner in the pool match between the sides, broke into the D on the left, away from two defenders, and though his initial shot was charged down, he collected the rebound and lifted the ball over George Pinner to make it 1-0.

England thought they’d equalised straight away. Phil Roper’s excellent run and cross was turned into the New Zealand net by a defender’s stick but after a video referral the goal was ruled out after the No15 was adjudged to have played the ball with the back of his stick.

New Zealand forced their first penalty corner on 14 minutes but Nick Haig’s pass was touched wide by Hilton. At the other end Roper tested Devon Manchester’s reflexes with a snapshot but the goalkeeper was equal to the task.

Pinner kept England in the hunt with some good saves, he first beat away an effort from Child and then stretched out a left leg to repel an excellent strike from Inglis.

With six minutes remaining in the half, England drew level. Ali Brogdon did well down the right and found Mark Gleghorne in the D. His cross was not cleared and Brogdon, who had continued his run, slotted the loose ball into the net to tie it up. A minute later England took the lead from a trademark Ashley Jackson penalty corner which gave Manchester no chance. Undeterred, the Blacksticks forced a penalty corner of their own which Hayward despatched to restore parity at the break.

Early in the second half, England restored their lead and again it was a Jackson penalty corner. The East Grinstead man used great deception to send Manchester to his right before firing the ball to the goalkeeper’s left for 3-2.

Child came to life once again with 11 minutes left, his excellent 3D skills got him away from his man but his reverse stick effort flashed wide of the far post. Seconds later, however New Zealand had their leveller. Shaw found Child inside the D and he spun away from his man and shot low through Pinner’s legs. Neither side could find a winner and so it was to shootout.

Inglis went first and slotted home for the Blacksticks with Jackson levelling it up from England’s first. Hilton went next and Pinner tracked him well, making the block, with the two competitors exchanging pleasantries in the aftermath. Catlin scored and then Edwards made it 2-2, but Middleton blasted his effort in to restore England’s lead. Child, New Zealand’s’ talisman went next but Pinner forced him wide and his shot missed the near post leaving Simon Mantell the chance to win it. He was fouled by Manchester and despite New Zealand’s referral the penalty stroke was given. Up stepped Jackson who made no mistake to win the bronze medal for England.

England Captain Barry Middleton said afterwards:
“We’ve not made it easy in the past and lost, so it’s nice to come out with the win. When it sinks in we’ll go out and enjoy it. We came here with high goals. We wanted to be in the final but that didn’t happen. None of us have won a bronze medal at Commonwealth Games and even though it’s not the game we wanted it’s still important. We want to win things, but you have to start somewhere and we hope to build on this and move on.”

After finishing fourth at the World Cup, and of course missing out on a Commonwealth Medal against the same opponents last time out, it was a moment of redemption for Bobby Crutchley’s side who picked up that elusive medal, at last.