With the Rabobank World Cup 2014 all over and the return to the harsh realities of real life firmly setting in, it’s time to reflect on what was a spectacular tournament in both men’s and women’s competitions. Judging by the lack of abuse directed my way from social media; regular readers have either been too nice or forgotten that before the tournament three hardy souls and I put forward our predictions for what would happen in the competition. If you’d like to remind yourself who the brave predictors were, click here. If you’d like to find out how we did, read on. (Spoiler: Inevitably I’ve not done so well.)

With Australia dominating the competition from start to finish including a wonderful display to sweep aside the hosts in the finals, hindsight makes choosing anyone other than Ric Charlesworth’s side look a little foolish.
All of us bar Charlie Gibbons of HockeyIssues fame plumped for a final of Australia vs Netherlands, (Charlie went outside the box, saying Australia vs India) but all of us, bar Charlie said the Dutch would win it. He opted for the Kookaburras and so is the only one to predict the winner correctly. 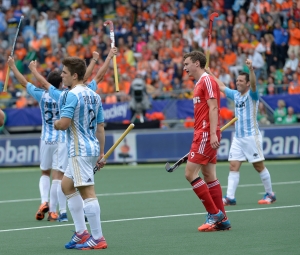 With the Dutch finishing runners-up that meant none of us called that one correctly whilst the bronze medal threw up some interesting and varied guesses: James Stock said Belgium, who finished fifth, Tom Herring and I went for England, (fourth) whilst Charlie picked the Dutch as the bronze medallists. None of us predicted Argentina would do so well, but it is they who have the bronze medal. Only Stocky (not the mascot) correctly said England would finish fourth. I wish he’d been wrong.

Men’s top scorer threw up a surprise as Los Leones’ Gonzalo Pelliat blew the competition away with ten goals, all from penalty corners. Chris Ciriello came in second with seven, including a hat-trick in the final. Closest to getting it right was Stocky who said the Australian star would come top, but understandably the rest of us picked Mink Van Der Weerden, who came up with just two goals.

As with the men’s competition it quickly became clear there was one team who was head and shoulders above the rest. One goal conceded in the whole competition and dominant displays in every game from the hosts made them worthy winners. Tom and Charlie correctly picked the Dutch for the gold medal, whilst Stocky went for Australia (who finished second.) The less said about my prediction of England (11th place) the better. <Sigh>

Miraculously, I did get the silver medallists, The Hockeyroos, correct whilst the others went for Argentina (Tom), England (Charlie) and Netherlands (Stocky.)

Bronze medallists were a Luciana Aymar-inspired Argentina, who saw off the surprise package, the USA in the 3rd-4th playoff. Charlie was the only one to predict that, whilst the rest of us went for England (Stocky), Australia (Tom) and Netherlands (me.)

For the top scorer the smart money was on Maartje Paumen, who took the honours with seven goals. Tom was the only one clever enough to plump for her whilst Stocky went, not unreasonably for Jodie Kenny who netted twice. Charlie went for Kim Lammers (five goals) and I went for Alex Danson, who scored once. 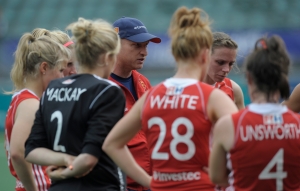 Unsurprisingly none of us foresaw the disastrous tournament England would have. Our predictions ranged from Jason Lee’s side finishing third (Stocky), second (Charlie), fourth (Tom) and, ahem, winners (me.)

A handy table of the results is below, one point for a correct prediction and none for an incorrect one. It clearly shows Charlie to be the winner and why I never gamble.

As you can see, predicting the outcome of such a competitive tournament has proved to be extremely difficult. Hindsight is a wonderful thing and predicting with your heart and not your head is far from ideal.

I am now braced for your ridicule, either in the comments section below on via Twitter on @TheTopoftheD.

I would like to thank James Stock, Charlie Gibbons and Tom Herring for their excellent contributions, and congratulations to Charlie for his winning score.