Iain Lewers’ late penalty stroke gave England a famous win over European rivals Belgium and sent Bobby Crutchley’s team into the semi-finals of the World Cup. In a dramatic game with plenty of twists and turns Lewers held his nerve with four minutes remaining to beat Vincent Vanasch with a flick that went high into the net and sent the England fans and players wild.

Belgium took the lead after a flowing move down the right resulted in Thomas Briels firing home Simon Gougnard’s cut back from close range. Nick Catlin drew England level on 19 minutes, capitalising on an excellent counter attack and linking up well with the outstanding Mikey Hoare to fire home via the goalkeeper’s pads.

Belgium threatened through Tom Boon who went close on a couple of occasions in the first half including an outrageous behind the back deflection that went just wide. 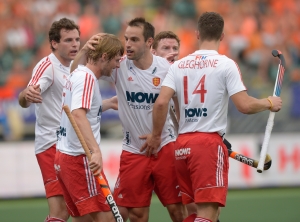 England came out for the second half and took the lead with just four minutes gone. Ashley Jackson and Barry Middleton linked up well bringing the ball out of defence and freed Nick Catlin. The No26 showed a terrific turn of speed and left defenders trailing in his wake before cutting the ball back to Jackson who had continued his run. Jackson swept the ball into the net from close range to make it 2-1.

Boon went close again with another deflected effort but England were allowing few chances, defending superbly. Hoare, Dan Shingles, Henry Weir and Dan Fox were in inspired form and Lewers was defending like a man possessed as England sought to protect their lead. With seven minutes left Tanguy Cosyns slotted in a penalty corner to make it 2-2, leaving England needing to find another goal from somewhere. Their prayers were answered with four minutes remaining. Jackson’s drag flick hit the man on the line and resulted in a penalty stroke. Belgium’s protests fell on deaf ears as they had already lost their video referral so there was to be no reprieve, allowing Lewers to rifle the ball into the roof of the net for a famous win.

Ashley Jackson was calmness personified at the end of the match, saying:

“We knew this was the game it was going to come down to. The last few times we played them the results gone against us so we knew it was all about the result today and we’re really pleased to get it.”

“We’ve shown, bar one game, which we’re annoyed about, what we can do. We don’t concede many goals; we managed to win some corners and things started to go for us, so we’re very happy. I trust Iain Lewers with my life, so I backed him to score!”

An excited George Pinner, told The Top of the D afterwards:

“We have some of the best world class defenders around. People who when you say the list of our great players may not get mentioned, but I’ll tell you, people like Mikey Hoare, Dan Shingles they put everything on the line for the boys as do the rest of the team and even the ones who aren’t here. That’s why we win games, because we want it so much.”

“The occasion brings out the best in the lads. We stood here two days ago and a lot of people wrote us off. What you saw against Australia was not England hockey. England hockey was today, 18 quality players fighting for each other. We thrive on those situations because we want to prove to everyone how good we are.”

On the prospect of facing the Dutch in the semi-final, Captain Barry Middleton said:

“We said we didn’t want to just come and play in a tournament in The Hague we wanted to come and do something special. That’s what we’re looking for. We want to play in front of a full stadium. We haven’t had it yet. We’ve played in front of good crowds but having seen it on TV it’ll be like nothing we’ve experienced before. Even London. The crowd are out to get us this time. I’ll get in touch with some of my friends at HGC and hopefully they’ll get the England shirts out so we’ll have a few in the crowd. I’m looking forward to it already. We’ll see what we can do.”

England’s semi-final opponents will be confirmed on the final day of pool games with either the Dutch or Argentina lying in wait.