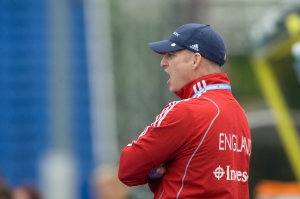 Jason Lee has an unquestionable pedigree as an international coach. He spent ten years in charge of the England and Great Britain men’s sides. It was a period that saw them rise from 11th to 4th in the world. He also guided the team to a European Championship gold medal in 2009 and a silver medal at the 2010 Champions Trophy. He has taken that Midas touch across to the women’s side, too. England picked up a World League bronze medal and a European silver medal in Lee’s first two major tournaments in charge. Now the World Cup looms large on the horizon, can he make it three medals from three? The Top of the D asks him that, and plenty more.

The Top of the D: What are your hopes for the World Cup?

Jason Lee: The same hope as everybody else. We want to win something and we want to play well. We want to come home knowing we’ve given our all, proud of our performances.

TTOTD: You’ve been in the job a while now, are the squad progressing as you’d hoped? How far off are they from where you want them to be?

JL: With team sports it isn’t always the case that every step forward in time is a step forward in improvement. There have been ups and downs but the standard of hockey the girls are playing currently is a long way ahead of what they were playing this time last year. We’re definitely getting there.

JL: It’s emotional, of course. The reality was that she’d had a very serious injury and the rehabilitation process was significant. She did a remarkable job to even get to the stage where she was considered. Ideally we wouldn’t have been in that situation but we felt at the time we selected the squad she hadn’t quite made the fitness we wanted.
We’d spoken with Helen all the way through the process to make sure everyone was aware of plan A, B and C, so she always knew what was going on. The squad asked to be informed by email so when we made the announcement, that’s how she found out. It seems harsh that way but that’s what the girls wanted.

TTOTD: It’s also a good chance for Ellie Watton and Zoe Shipperley. What made you select them? What do they add to the group?

JL: Zoe is extremely strong and determined and reads the game very well. She’s also really powerful. It’s not common in women’s hockey to have someone with the power she has. She’s strong on the ball, makes a great range of passes and she deserves to be in the squad. It’s a pity we couldn’t have got her in the squad earlier, perhaps that would have decreased some people’s concerns about her level of experience.
Ellie was on part time funding for a long time and she did a remarkable job working and still managing to progress her hockey significantly. She has good technical skills and although she would say that she struggled physically with the workload of training before, she’s made a lot of ground on that front. We think we play well because of the way she links the play.

TTOTD: It’s been suggested that England have a smaller budget than some other teams. Has that hindered you in any way? Has the preparation been as you’d like?

JL: I’d be amazed if anybody in sport doesn’t want more funding. Regardless of the facilities on offer you always want better, that’s the nature of competitive sport. I think the thing with international hockey now is there are so many tournaments. When I was a player in the 90s we had a four year cycle where we’d play maybe 5 tournaments of note. We’ve played that in the last 12 months. The resources you really need are time and energy and the ability to make progress rather than the financial concerns you probably mean. We’re more stretched than we were in previous cycles for time.

TTOTD: Who are the teams to watch out for?

JL: In women’s hockey the stand out two teams who’d be recognised by most people are Holland and Argentina. Argentina had a little wobble last year but they’ve just won a 6 nations competition in New Zealand comfortably. They beat Australia twice. Australia are a real threat too as they’ve been playing consistently to a high standard for a while now, so for Argentina to beat them so comfortably shows the standard they are at right now. Since the Olympics, Germany have played some great hockey, they’re the European champions and they beat Holland in World League 3 so aside from us, they are the four teams people would look at to win it.

TTOTD: Who do you think will be the surprise package?

JL: All the Asian nations have a history of pulling a remarkable performance out of the bag for one tournament, maybe not consistently but Korea, Japan and China; I wouldn’t be surprised if one of them made a run in the tournament. I think America have the potential to be troublesome, too. They finished low in the Olympics, but they beat Argentina 1-0 in the first game I think there will be a few of those result at the World Cup.

TTOTD: Has the team been preparing or the prospect of the dreaded England World Cup penalty shootout?

JL: I actually think we’re in a good position for that. We’ve got some strong attackers and Maddie Hinch is excellent at the shootout. We’ve encouraged teams in our practice games to play us in a shootout afterwards so we’ve had some valid practice. Just doing it amongst yourselves isn’t enough, doing it against random opposition is very useful, so I think we’ll be as ready as we can be.

TTOTD: What would it mean to you as coach to lift the world cup?

JL: It’s everything we strive for. It’d be a nice justification for the work we’ve put in. Whether we do or don’t get the result we want at the World Cup we can be very proud of the efforts we’ve put in so far.

You can follow England’s progress by watching all their games on Sky Sports. Alternatively, keep an eye on TheTopoftheD.com for all the updates or follow me on Twitter.