Tim Whiteman is not your average, run of the mill international hockey player. With the Central Programme, players now tend to graduate from the Under-21 squad straight into the seniors and a role as a full time hockey player. The Beeston defender however took a slightly different path.

Having struggled with injuries during his early 20s he decided to pursue a career as a teacher before finally getting his opportunity to play for England aged 25. It is a route that has allowed him to truly appreciate his opportunity: 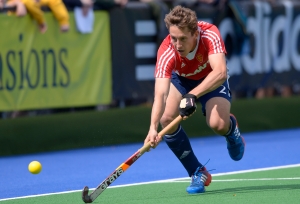 “Joining the squad a bit later and coming from a career into international hockey I know that this is my chance and that I have to take it. I have an understanding of being in the working world compared with coming here and playing and training all the time and I know how lucky I am to do something I love.”

Understandably, having watched players younger than him being called into the squad, there was perhaps a feeling for Whiteman that his international dreams would not become a reality. However, a string of eye-catching performances at domestic level ensured he was handed an England lifeline and a surprisingly easy choice:

“A year and half ago they had assessments for players who hadn’t been selected yet. I probably banked on the fact my chance had passed and I was pretty much focused on playing for Beeston for the next five or six years whilst being a teacher.” he adds “The choice to leave teaching wasn’t a decision I took lightly, but the opportunity to join the squad and put my heart and soul into hockey, which I love, how could I turn that down? Deep down I was always going to say yes.”

Some players find the step up from domestic hockey to playing against the best in the world difficult. The 26-year-old however has grabbed his opportunity with both hands, seamlessly bringing his positive, attacking style to the international fold, something he attributes to the efforts of England Coach Bobby Crutchley: 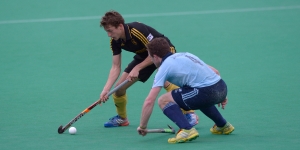 “One of the best things about the coaching staff and Bobby in particular is they’ve always said to me to just go out and play the way I do for Beeston. It gives me a lot of confidence to be able to play for England with the full backing of the coaches to just play my natural game.”

Although he is still a relative novice at this level the Beeston star knows all too well the quality on display from the other sides at his first World Cup tournament, citing Australia, Germany and Belgium as the main threats, as well as, of course, the host nation, Holland. Despite this, his answer to the burning question of whether England can win the tournament gives an air of quiet confidence:

“I think we can win it. We’ll take the games one by one but we have plenty of world class players. Barry Middleton, Ashley Jackson, Nick Catlin, George Pinner and Adam Dixon have been fantastic this past year so we’ve got the players who can do it. It’s just about maintaining the levels throughout the tournament. Everyone knows we’re capable and it’ll be tough but why not?”

Whiteman has already picked up a medal from the World League and whilst he has been a late starter to the international scene, a gold medal at the World Cup would surely more than make up for lost time.

The Top of the D would like to thank Tim Whiteman for his time and good humour in conducting this interview.