So far, James Stock and Tom Herring have thrown their hats into the ring with some sterling work on the predictions front.
Now it is the turn of the brains behind @HockeyIssues_  on Twitter, Charlie Gibbons to tell us who’ll win the Hockey World Cup. You can find out about Charlie in my “Meet the Experts” piece, or just read on.

1st – Australia.
Group A looks the stronger group with Australia, India, Belgium and England all fighting for two places. Australia will win the group with India coming in second. I would have fancied Belgium after recent form beating England, however missing Loick Luypaert may swing the favour towards the Indians as the runners up.

2nd – India.
I back India to sneak a very tight game against the home nation to reach the final as they’re always a very difficult team to beat. Expect lots of goals from the Indian side.

3rd – Netherlands.
Group B is slightly less competitive, although nothing should be taken away from South Africa and New Zealand. Argentina may surprise us with their silky forwards, however their defence looked a bit suspect when they played England in the recent 4 Nations Tournament. The Dutch should win the group with Germany as the runners-up. Lacking one of their stars in Moritz Furste gives the Dutch even more of an edge over their rivals.

The England men have it all to do in a tough group. I think they’ll have a good tournament and finish 5th beating New Zealand in the 5/6th place game. No podium finish for them this time, though.

1st – Netherlands
I see the Dutch coming through the ‘easier’ group in front of the home crowd. Unfortunately, after beating Argentina in the semis, I don’t see England holding up against a pumped up Dutch side that just looks unbeatable at the moment. With both the men’s and women’s sides clearing the group stages, there are going to be a lot of happy people wearing orange but I think the women will do better than the men. 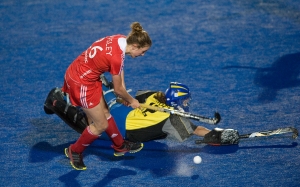 2nd – England
Despite a very tricky group and the missing Helen Richardson-Walsh, I’m optimistic that our ladies will pull through and even win their group. I fancy them in the semis to do a job and get themselves into the final.

3rd – Argentina
With Luciana Aymar, anything is possible. I see them scraping through the ‘group of death’ as runners up, but a demolishing in the semis awaits.

Three of the four experts have had their say, why not have yours? Leave a comment below, or Tweet me @TheTopoftheD. The final set of predictions will follow tomorrow, when I will finally show my cards.