And so the last round of games of the regular season is upon us. With the top spot still being contended between Beeston and East Grinstead and the relegation places still to be decided there is still much to play for as teams try to save their skins or build momentum ahead of the playoffs. 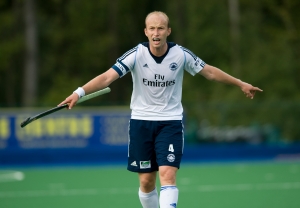 At the top of the table East Grinstead took a huge step towards securing first place and the automatic European place with a 4-3 win over Reading. Just as when the sides met earlier on in the season, Grinstead established a 3-0 lead but this time they were able to see it through as Luke Taylor’s penalty corner in the 45th minute, to make the score 4-1 proved vital in the end. Having missed out on the playoffs last season there is a new-found determination at Saint Hill for the Sussex Side.

“I think we had a little bit of complacency in the squad. We had done really well over five or six years and it was taken for granted that we’d qualify for Europe.” said Glenn Kirkham, East Grinstead’s captain. “The year after London quite a few players perhaps took their eye off the ball. We had some rebuilding to do, players left and the new players took some time to bed in. The players we’ve brought in, like Andy Bull and David Condon were playing at sides that haven’t had the chance to play in Europe before so they have that hunger and desire which has pushed us on so hopefully we’ll be able to qualify again.”

Grinstead face Surbiton this weekend, a side they might well play in the semi-final of the playoffs. Whilst the game poses a test, as it will in the playoffs, Coach Karl Stagno is characteristically confident ahead of the upcoming matches:

“If we can get three points next week and secure top spot then we’ll be in Europe, which has always been our aim. We’ll go into the playoffs in a rich vein of form. If I’m honest all four teams will say the same thing, if we hit our stride we would back ourselves to win the playoffs.” he added: “All the teams are capable of beating each other on their day so the key in this situation is knowing how to hit your stride and what you need to do to produce a performance when it really matters. We’ve been working towards that all season and the Reading game shows we are heading in the right direction, but there is work to be done still to maintain those standards.” 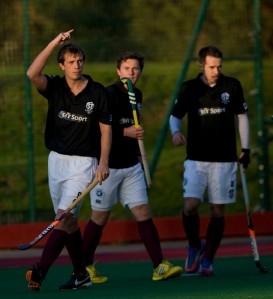 Surbiton come into the clash off the back of a quite extraordinary game last week against Cannock. Andy Mitchell’s side led 4-1 in the 31st minute and seemed to be heading towards a vital three points, only for Matt Daly to come up with a four-goal blitz in the second half to help Surbiton to an incredible 6-4 victory. Daly and Alan Forsyth are fast becoming the most potent strike force in the league, scoring 38 times between them. They will be keen to send a message to the other playoff contenders and play themselves into some good form ahead of the playoffs.

Cannock find themselves still in the relegation battle after that loss to Surbiton. A win would have ensured they were safe for another season but instead they are left sweating over the final day’s results. The Nockers travel to Highfields where they will take on Beeston, hardly a walk in the park for a side scrapping to avoid relegation.

“We started the game very well with two goals in the first ten minutes but we took the foot off the gas somewhat and allowed Loughborough to come back into the game” said Matt Taylor, Beeston’s coach. “You have to give credit to how Loughborough played and it wasn’t just grit and determination but also some skilful individual play meant that we were on the back foot for spells throughout the game. It was only in the 55th minute that the game was secure with Ben Arnold converting a penalty stroke. From a Beeston point of view, the game won’t just be remembered for the win but also with our large injury list at the moment it gave us the opportunity for 15 year old Josh Pavis to make his National League debut.”

Taylor’s side do indeed have a growing number of players nursing various knocks and injuries. A notable absentee is Great Britain goalkeeper George Pinner, currently out with a knee problem. Taylor refused to make excuses about their predicament, however: “We have a few players out but that’s why we have the squad size we do, it’s up to the players that come in to step up to the mark. We’ve set out to win the league and we want to do that. We approach every game as though it’s a Finals Weekend game and I’m confident our squad is good enough to keep winning.” 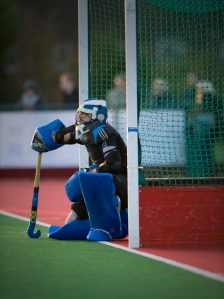 Things look bleak for Sheffield Hallam who sit bottom on eight points going into the last game. A win against Wimbledon this week would take them to eleven points but with Cannock’s superior goal difference, even then it would seem likely they would be subjected to the relegation playoffs. Hallam were devastated as a 70th minute winner from Canterbury’s Mickel Pierre last weekend condemned them to a heart-breaking 4-3 loss and most likely a place in the bottom two. Wimbledon, who of course came up with Hallam through last season’s playoffs have enjoyed an excellent first season in the top flight and whilst their dream of a Championship playoff place is beyond them  Ben Marsden’s side will be keen to finish strongly with a win over Vicky Joel’s team.

Hampstead and Westminster, who have had an up and down season finally pulled well clear of the relegation places with a 3-2 win over the Wombles last week. Richard Hildreth’s brace did most of the damage whilst Duncan Parnis popped up with what turned out to be the winner. Hampstead go up against Canterbury, who they beat 2-1 in the first half of the season. The Polo Farm side has produced some fantastic results with three wins and draw in their last five games. The Kent side left their charge for the playoffs too late but will be keen to content themselves by finishing as the best of the rest, in fifth place.

That just leaves the clash between Reading and Loughborough Students at Sonning Lane. Both sides went down to defeats last weekend, however Reading are guaranteed a place in the championship playoffs and depending on other results are likely to finish third. Charlie Seccombe, Reading coach was understandably disappointed after seeing his team go down to East Grinstead but was keen to focus on the bigger picture:

“We’ll get another chance to show what we can do in the playoffs. It’s important we learn our lessons from the East Grinstead game and make sure we play to our ability and come back stronger. Mentally we know we can bounce back from this and we know we’d back ourselves to be as good as anyone on our day. That starts next week against Loughborough.” 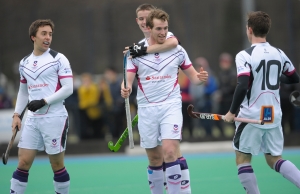 The Students in stark contrast to their opponents will be hopeful of a massive three points, which would see off Sheffield Hallam and potentially overhaul Cannock, steering Jerome Goudie’s team clear of the relegation places. Their win over Wimbledon in early March could yet prove to be vital as they have clung on to Cannock’s coat tails and managed to keep their noses in front of Hallam. Whilst they may get another chance to redeem themselves in the playoffs even that is not assured yet and it is truly a case of do or die for the Students.

As always you can keep up to date with the results and who finishes where by visiting the England Hockey website.

This entry was posted in NOW: Pensions Men's League. Bookmark the permalink.