With just this round of games left to go in the regular season the two relegation spots are already confirmed as Olton and West Warwicks have slipped through the trapdoor whilst Sutton Coldfield face the pressures of the relegation playoffs. The four contenders for the Championship playoffs have also been cemented with Canterbury, Reading, Surbiton and Clifton securing the top four places.

All that remains is for the final standings to be confirmed. With Canterbury sitting top of the league by a point from Reading, the equation is simple, if Canterbury win they finish top and book their place in Europe for next season. Having lost top spot to Leicester on the final day last season Canterbury will be even more determined to get over the line this time. They did not have a game last weekend as their opponents, Olton forfeited the game handing Canterbury a 3-0 win. This weekend, the Kent side have a very tough assignment against playoff rivals Clifton.
“We want to make sure we finish strong. We’re aware of the situation in the league but we are more interested in performing well and keeping to the standards we’ve set ourselves this season.” said Jen Wilson, Canterbury’s Player-Coach. “Clifton are well organised and hard working so we know it’ll be tough for us. You can look at the last meeting where we beat them but that was a long time ago and much has changed since then. We’re very pleased to be in the playoffs and obviously delighted to be on that stage, which we’re looking forward to but we have a job to do first and we are fully focused on that.”

Clifton bounced back from defeat the previous week with an excellent display to see off Sutton Coldfield 4-2, securing a playoff berth in the process. Clifton raced into a 4-0 lead within 20 minutes with super striker Els Mansell netting her tenth of the season followed by a goal from Zoe Leach and a brace from Emily Kirkham. The Silent Assassins know they cannot finish any higher in the league than fourth but with playoffs looming large on the horizon they will be keen to get hit some kind of form and so will not roll over for the league leaders.

Reading who are snapping at Canterbury’s heels also have a tough test as they come up against Bowdon Hightown. Reading know they can only win and hope Clifton do them a favour as they attempt to move above Canterbury to top spot. They kept the pressure on with a typically close fought win over old foes Leicester last weekend.

“Leicester was a tough game as traditionally it always is.” said Reading captain Emma Thomas. “We’re surprised where they are in the table as they’re a very good side who could easily be higher. I think that’s a positive reflection on the league and the strength of the other teams rather than a negative reflection on Leicester. We weren’t at our best but that’s more to do with how well they played rather than us not performing.”

Looking ahead, Thomas was characteristically focused, telling The Top of the D: “At this point we’re looking at continuing our momentum ahead of playoffs. We’re trying to keep improving every game and put our plans into practice so we can peak at the right time. We’re a big game team so hitting form at this stage is our aim and one of the most important factors for us at the moment. Playing a tough side like Bowdon is a good test to have at this point in the season. They’re hard working and well organised and can create goals out of nothing. I’d expect them to try and hit us on the break so they’re always dangerous.”

Bowdon’s slim playoff hopes ended as they held Surbiton to a 0-0 draw last week, ensuring they will scrap with Leicester for 5th and 6th place. Despite missing out on playoffs, Player-Coach Tina Cullen sees plenty of positives for Hightown who are looking to the future: “We were pleased with the result on Saturday but not necessarily the performance. Surbiton had a lot more possession than us but our defence held out very well. Amy Tennant in goal had another good game for us which is great. Our young players are learning and developing every week which has been a major focus for us this season.”

Surbiton, who battled through that stalemate with Hightown will this week face a Beeston side they beat 6-2 earlier on in the season. With third place assured for Brett Garrard’s team and with Beeston free of relegation worries it will be interesting to see how much the two teams extend themselves or whether they opt to experiment with the playoffs and next season in mind. Of course Beeston’s Sophie Robinson will be anxious to continue her rich vein of form and find the goals she needs to overhaul Alex Danson at the top of the scorers’ charts. Robinson scored again last week in the 4-1 win over University of Birmingham, to take her tally to 14, just one shy of Danson’s total. Whatever happens, it has been a fine effort for Robinson, and Beeston’s first Premier League campaign.

Olton, who are already confirmed as the bottom side are still awaiting their punishment from England Hockey after their forfeiture of their previous game against Canterbury. They have one more game, against local rivals Leicester who despite the lack of playoffs will be keen to hang onto fifth place in what has been a transitional year for the Pukkas. They beat Olton 8-1 last time out and would back themselves to produce a similar result this time out. 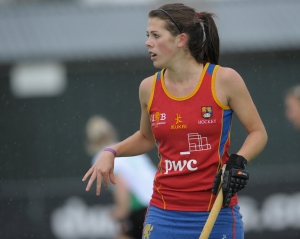 That just leaves the match between University of Birmingham and Sutton Coldfield. A few weeks ago this was looking like it might end up being a straight shootout for who would go into the relegation playoffs; however Phil Gooderham’s side came up with a magnificent 3-2 win over Bowdon at the end of February and then almost guaranteed safety with a 4-1 win over Olton. Survival was confirmed as Sutton slipped to defeat last week. They must now steel themselves for the task of trying to preserve their Premier League status through the playoffs.

As always you can keep updated with all the results and scorers by visiting the England Hockey website.