And so the halfway stage has been reached in the NOW: Pensions Men’s Premier League with Beeston still unbeaten and setting the pace with nine wins from nine and a seven point lead over East Grinstead and Reading in second and third place.

The Bees were made to work hard for their win yet again, running out 1-0 winners over a stubborn Cannock side with another goal from Sam Ward, the league’s top scorer (and soon to be bankrupt if his form continues!) Despite the narrow margin of victory, Coach Matt Taylor was satisfied with his team’s display: 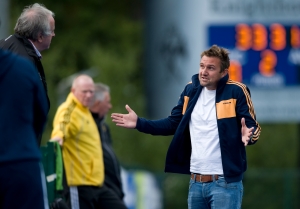 “It was a tough local derby on Saturday where we struggled to convert the chances we created. Having said that I was pleased with the performance. Defensively we worked very hard to restrict Cannock to only a couple of chances. We only created one penalty corner all game but that was despatched by Sam Ward to give us the 3 points.”

This week Taylor’s team put their perfect record on the line against an in-form Wimbledon. The Wombles have won their last three games, the latest a 2-1 win over Sheffield Hallam with both goals coming from Ali Brogdon taking them to fifth in the table. Despite this good spell, The Dons aren’t getting carried away, Player-Coach Ben Marsden told The Top of the D:

“A realistic aim for us this season would be mid table, a dream result would be in the top five and an exceptional result would be top four. We just want to focus on the teams we feel we can beat. We have some exceptional talent but any new group in a new league will take some time to get up to speed. We’re happy that we got some wins under our belts and if we can keep that going that’d be great.”

Cannock, who were Beeston’s latest victims last week have a massive game at Chase Park this coming weekend as they play host to Loughborough Students. The Students are currently rock bottom, a point behind their opponents but have been showing some signs of recovery, losing by one goal to Beeston two weeks ago and by a single goal last week to Reading. Of course the sides met on the opening day and it was Loughborough who took the spoils. Both sides will be desperate for the three points with one round left after this one before going into the Christmas break.

Sheffield Hallam, themselves at the wrong end of the table, also on four points have a home match against East Grinstead this week. The Sussex side were held at home by Surbiton last week but stay in second place in the league. Player-Coach Mark Pearn was very candid, telling TTOTD:

“We’re disappointed to lose a goal so late. It was a close game, I thought Surbiton played very well, they pressed us hard. We controlled periods of the game but didn’t link up as well as we could in the final third and didn’t take our chances. It’s disappointing getting so close to the victory and not taking it.” Looking ahead to this week he said: “Sheffield haven’t won too many games but they haven’t been beaten heavily by anyone. When they came here it was a close game, we scored two late goals. They’re battling against relegation so will be tough away from home but we’ll go up there full of confidence; hopefully we can improve on our performance against Surbiton and get those extra goals to get the three points.” 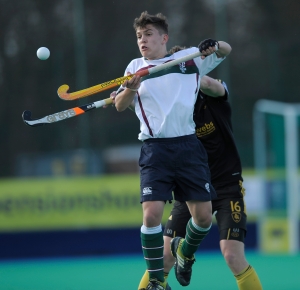 Surbiton, who grabbed a valuable point from East Grinstead last week have an intriguing clash against the division’s Jekyll and Hyde side, Hampstead and Westminster. After their 4-0 defeat to Wimbledon the week before, Tom Kavanagh’s side pulled off a 2-1 win over Canterbury with a last minute goal from Neil Hamilton’s penalty corner. Surbiton’s Coach Todd Williams is of course a former Hampstead coach, but concedes that will not be much of an advantage this weekend:

“The only thing you can predict about Hampstead and Westminster is that they will be completely unpredictable. Their result against Canterbury shows if you aren’t as focused as you should be they’ll hurt you. They’ve been in the Premier League for a long time, they have their own methods and they work.” he added: “My time there will be of no help whatsoever in preparing to face them. They are tough and organised; they never give up easily and have enough players to cause anyone problems.”

That leaves the clash between Canterbury and Reading at Polo Farm, part of a double header with the two ladies teams also set to face off on the same day.

Canterbury had been in good form, winning three of their last four games before last week’s defeat to Hampstead and Westminster. Captain Michael Farrer was frustrated not to continue their good run:

“We’re extremely disappointed with our performance. It was a game that we felt we could have had sewn up by half time and had we been a little calmer in front of goal that would’ve been the case. Unfortunately for us it was just one of those days where we couldn’t get the ball in the back of the net and Hampstead capitalised on that to take the points.”

Despite his frustrations last week, Farrer is keen for his side to bounce back on the club’s President’s Day against Reading:

“Halfway through we’re not quite where we wanted to be so we are going to have to pick up points from teams that beat us earlier in the season in order to reach the play-offs. That challenge starts this weekend against Reading who beat us quite comfortably at their place earlier in the season. That game feels like a long time ago now and I’m sure both squads have added players and also improved in general so it will be interesting to see how this fixture plays out.” 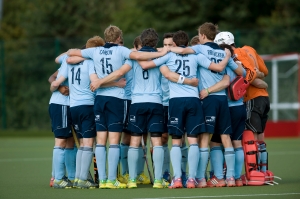 Reading have drawn level on points with East Grinstead after a hard-earned win over Loughborough last weekend. Despite the narrow victory, Coach Charlie Seccombe was pleased with the professional display his side produced:

“It was really important for us at this stage of the season to pick up the three points. We played reasonably well and maybe could’ve been out of sight by half time if we’d taken our chances but overall it was a good three points. We expected them to be a tough team to beat. They’re fit, well drilled and well organised. I think our experience was the difference between the two sides.” He added: “Canterbury away, just like Loughborough last week is always a difficult trip. We got a great result there last year but until last week they’d been on a good run, so we know it’ll be a very difficult challenge. If we deliver the performance we’re capable of we’ll get the three points.”

With this, the second to last week before the Christmas break, every team will be looking to finish on a high before the indoor campaign begins. As always, there are plenty of twists and turns in store across another series of exciting games. Log on to the England Hockey Website for all the results.

Columnist for The Hockey Paper and the man behind The Top of the D. Writer, podcaster, goalkeeper and BBC Sport man. Used to work for Great Britain Hockey and have covered the sport at every major tournament.
View all posts by thetopofthed →
This entry was posted in NOW: Pensions Men's League. Bookmark the permalink.