The Top of the D has already run the rule over the teams contesting Pool A in the Eurohockey Championships. Now it is the turn of those in Pool B, arguably the tougher of the two groups.

England have made a promising start under new coach Jason Lee, who took the reins after the London Olympics. A runner-up in the Investec World League Semi-Final in London in the coach’s first competition in charge has been followed up by some promising results in friendly action. England have undoubtedly been drawn in the tougher of the two pools but on paper should be able to advance to the semi-finals. Lee is known as an attack minded coach and his side showed flashes of that attitude during the World League, netting four against Argentina in the semi-final. Nine Olympic bronze medallists are in the squad with Alex Danson and Kate Walsh still world class performers whilst the experienced and hugely talented Helen Richardson makes her long-awaited return from back surgery.

Player to watch: Lily Owsley. 18-year-old Owsley has caused quite a stir since making her debut against South Africa in the Investec World League. The Bristol Firebrands star has superb close control and is not afraid to take players on, as evidenced by her “almost wonder goal” on her debut. She has since found the net twice for her country and if she keeps on improving, it looks like she has a bright future ahead.

Having had a disappointing Olympics in London, where they finished seventh, Germany have enjoyed a return to form post-Olympics, winning the World League Semi-Final in Rotterdam. They won every game up until the final where Janne Muller-Wieland grabbed a last gasp equaliser to take the game to penalties. Germany held their nerve to overcome the hosts, Holland to win the shootout. Their results in Rotterdam were perfect for a tournament, improving as the competition wore and coming to form at just the right time. The Germans are a resolute defensive unit who are excellent on the ball and very clinical in front of goal. They may be ranked fifth but on their day they could cause any side in this competition a problem. 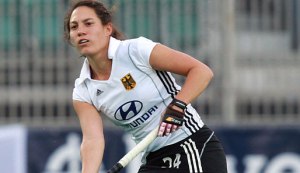 Player to watch: Maike Stöckel. A veteran of two Olympic Games, Stöckel seems like she has been around forever. Still only 29 but with over 200 caps to her name, the No.24 is ice-cool in front of goal and rarely wastes an opportunity to find the net. A real attacking talent.

Spain are not the European force they once were but are definitely showing signs of a resurgence in recent months. Whilst they finished eighth at the World League in London, their displays did not deserve the wooden spoon as they were competitive in every match against more established opponents. They managed a creditable draw against hosts, England and won a lot of admirers with some of their attacking play and deadly finishing from players like Maria Romagosa. As is often the case with Spain, they are a little bit inconsistent. They have the ability to cause an upset in this group, but it depends which Spain decides to turn up on the day.

Player to watch: Lola Riera. Riera is an outstanding talent who really shines in this Spanish team. Riera plays with the calm and assurance of a player much older and much more experienced. She is the chief organiser and spurs her team on as well as chipping in with some important goals, notably from penalty corners.

With five players from the central Great Britain squad in Nikki Kidd, Alison Bell, Emily Maguire, Morag McLellan and Amy Gibson, on paper the Scottish side shapes up very nicely indeed. Undoubtedly a talented group of players, they have been drawn in a tough pool for their return to this competition after missing out in 2011. Their recent form is not exactly sparkling on the world stage, exiting the World League in round two behind the USA and Chile. Scotland will hope that they can spring a surprise against old foes England by creating a local derby style battle although they will first have to overcome Germany and Spain.

Player to watch: Emily Maguire. Maguire is an Olympic bronze medal winner from London and was the only Scottish player to make the final 16 for the tournament. An accomplished defender with excellent tackling and superb distribution, her experience and calm head will ensure she is a key part of the Scotland squad and their bid to upset the big guns.

That takes care of the Women’s competition which starts this Saturday with England vs Spain at 9am GMT.

Previews of the Men’s Competition will follow on Friday.

Columnist for The Hockey Paper and the man behind The Top of the D. Writer, podcaster, goalkeeper and BBC Sport man. Used to work for Great Britain Hockey and have covered the sport at every major tournament.
View all posts by thetopofthed →
This entry was posted in Eurohockey Championships. Bookmark the permalink.