Michael on the Mike: The Top of the D meets Michael Absalom.

If like The Top of the D, you watch a lot of hockey you will no doubt have heard the dulcet tones of Michael Absalom. Having debuted as a commentator in 2005 on Eurosport the 33 year-old has made his mark as the up and coming voice of hockey. Absalom has worked at the Olympics, The Hockey India League and the FIH World League. The Top of the D caught up with him to find out a little bit more about the man behind the microphone:

The Top of the D: How did you get into being a hockey commentator?

Michael Absalom: I actually started off as a kids’ TV presenter. I used to play hockey in my younger years and I still play club hockey these days too. It just seemed like a natural transition. I started probably eight years ago, working towards London 2012. It was almost like being selected for the playing squad! I wanted to be picked for a commentary team or to be an in-vision presenter. The chance to do some work with Eurosport came about before that, I really enjoyed it, people seemed to like it and so I’ve done it ever since.

TTOTD: So apart from hockey commentary, what jobs have you had previously?

MA: As I said, I started off on a CBBC show called The Best of Friends. It was a challenge show that involved sucking on these blue sweets. If you got a blue tongue you had to go off and do these challenges round the country. Each challenge was more difficult than the last and there was a prize at the end of it! I also did some work on a show called Exchange, which was also live TV. You never know what’s going to happen, so it keeps you on your toes. Finally, I did Sportsround which was that transition between kids TV and moving into something slightly more grown up, but where I still got to have a lot of fun.

TTOTD: Is there anything in the pipeline or out there that older readers might recognise you in?

MA: Well, I do some acting as well. There’s a Colgate advert that I’m in, the one with the floss test and getting gum disease. It’s on TV at the moment and I’m getting a lot of stick for that!

There are a couple of other things coming up: A show called Grass Roots about a Division Two football team trying to get into the Premier League, which is another acting project. Outside of that are corporate gigs and presenting on various online shows. I also worked as a commentator in Rotterdam at the World League, which was amazing. Then I came to London to work on the Investec World League for Sky Sports. There’s loads going on, but obviously it differs from week to week.

TTOTD: What sort of hockey pedigree do you have? What level have you played?

MA: At school I played England under 18s then trained with the under 21s.The amount of commitment and the sacrifices people have to make to get to the top is huge. I wasn’t in a position to do that, so I ended up being a ski instructor for three years in Canada and then came back and fell into the TV presenting. The level of dedication of the players I was at school with such as Richard and Simon Mantell was phenomenal. It’s great to see their efforts pay off but I couldn’t commit to reaching that level.

TTOTD: How about now, does work prevent you from playing?

MA: My work does get in the way of hockey from time to time. I’ve had to drop down but I still play in Richmond 2s. It’s a great standard with the likes of Reading 2s, East Grinstead 2s, Hampstead and Westminster 2s etc. it’s a great league and we’re looking forward to a good season and finishing in the top half of the table. 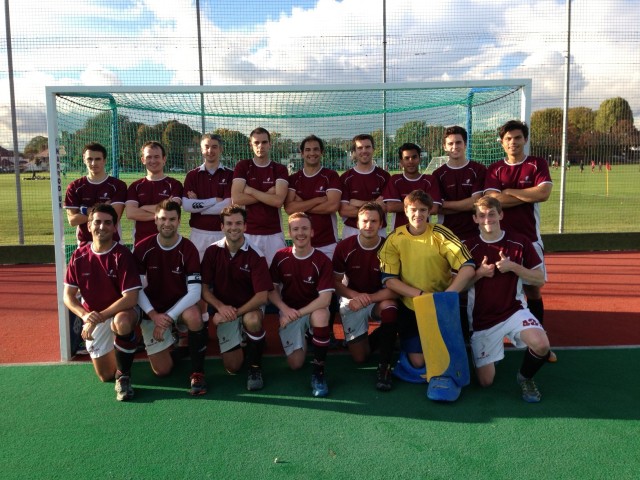 TTOTD: Who would you say the best player you’ve seen is?

MA: Maartje Paumen is outstanding for the Netherlands. She has the skills in and around the D but can also control a game. She’s strong, physically fit and one of my favourites in the Dutch side. There’s also Kate Walsh who is an absolute warrior. We saw her break her jaw in the Olympics last year but she was back, chomping at the bit just a short time later. Players like those two in the women’s game really stand out.

In the men’s game Teun De Nooijer is one of the best. Obviously he’s retired now but it was a pleasure to commentate on a number of his games. Someone like Barry Middleton, too. He’s been there and been consistently good. He’s got really excellent core skills and is a great player for kids to try to emulate.

TTOTD: Are there any particular players who are your favourites? Players you always love watching?

MA: It’s always been Richard Alexander, Ratman. It’s something you notice in the commentary box but not necessarily on the TV because you can’t see the whole pitch, but he works so hard on and off the ball and just hassles for everything. He seems to win man of the match every time he plays for England! He’s go so much character too. I remember him doing this dance at the Sultan Azlan Shah Cup, on stage. Incredible! He’s got so much personality off the pitch that he brings onto the field too, which is always great to see.

TTOTD: What would you say the best game you’ve worked on is?

MA: The highlight of the games I’ve worked on, although I was pitch side not commentating, was at the Riverbank Arena for the Men’s Olympic Final between Germany and the Netherlands. The Netherlands had that great run in the competition, including thrashing Great Britain in the semi-final.  Everyone thought they’d cruise away with it but the Germans were simply brilliant that night and came away Olympic gold medallists. The atmosphere and the standard of hockey that night was incredible.

TTOTD: Is there a co-commentator you enjoy working with, or someone you’d like to work with?

MA: I’ve really enjoyed working with Simon Mason in the past, his knowledge is incredible. Of course there’s also Mel Clewlow, who’s great. We’ve done some stuff for the BBC together which was a lot of fun. What’s really important with the colour commentator is they’ve been there and experienced it. Although I still play the game, I’ve not played it to that level or gone through the emotions that the players are going through. It’s great to work with people who do have that experience and knowledge.

TTOTD: Is there a commentator you aspire to be like?

MA: Barry Davies is an absolute legend. I’ve always heard him do the hockey. He was there way back in Seoul when the men won their gold medal. It is always his voice that I associate with the sport. Hopefully one day I can fill those boots. They are massive boots to fill, though. If I can get close that’ll be a huge achievement. If can commentate on as many tournaments as him, then I’ll be really happy.

TTOTD: Have there been any embarrassing or memorable moments in your commentary you can recall?

MA: I got pulled up on one in the world league in Rotterdam. I got my Hockeyroos and Kookaburras mixed up. As you’ll know, The Hockeyroos are the women and the Kookaburras the men but I got them the wrong way round. I think I’d seen a boxing kangaroo picture in the crowd, so I obviously had that in my head. It was a rookie mistake!

I suppose a classic was one I don’t really remember saying but it was pointed out to me afterwards: “A stonker from Jonker” commentating on a goal scored by the Netherlands’ No.10, Kelly Jonker. It’s not planned but sometimes some good stuff comes out!

TTOTD: Can you sum up why you love hockey?

MA: That’s tough. The reason I love hockey is because you can’t go out and do it by yourself. Even if you’re the best player in the world it requires all 11 of you to be working together to achieve the same result. Whether that’s at junior level, club level, international, or veterans there’s the same goal, to go out and win, and to go out and have fun with your mates. It’s great.

TTOTD: As someone in show business, who is the most famous person in your phonebook? 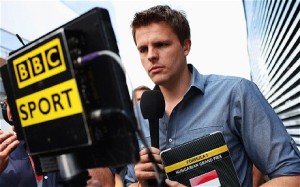 MA: I’ve got Jake Humphrey and Fearne Cotton. I think they count! Jake and I started off as kids TV presenters together. He’s doing exceptionally well now with the Formula 1 and now the BT Sport work, but he’s a really nice guy and always there if I need advice. He’s someone I look up to and still enjoying speaking to. Fearne’s just had a baby so she isn’t easy to get hold of these days!

TTOTD: If you had a movie made of your life, who would play you?

MA: It’ll never happen, but if it did, I would love it to be Leonardo DiCaprio. I’m not sure what his hockey skills would be like, but he’s an incredible actor and I love everything he’s been in.

TTOTD: You think he’d be able to capture the essence of Michael Absalom?

MA: I’d hope so with all his experience, I don’t think he’d find it too demanding!

TTOTD: How do you think he would cope with a night at the club house with Richmond HC?

MA: As long as he can do Snakebite and then a Sambuca he’ll be fine!

The Top of the D would like to thank Michael Absalom and his Colgate-white teeth for their time and patience in conducting this interview.

This entry was posted in Features. Bookmark the permalink.