One of things The Top of the D has always loved about hockey is how welcomed and included I’ve always felt at every club I’ve been to. In contrast to many other sports, the notion of the hockey family seems to be one that is real and provides enjoyment for many people all over the country. With that in mind, the work done by Pani Theodorou of Waltham Forest HC to promote disability hockey, is a vital part of the all-inclusive nature of the Hockey Family. Her efforts are really quite impressive, too. The Top of the D finds out a bit more: 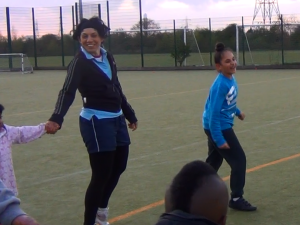 The Top of the D: How did the idea for Forest Flyerz come about?

Pani Theodorou: In 2011 Waltham Forest were asked to deliver hockey sessions at a sports taster day for disabled people. We’d never done anything like this before but eight of us went along and had a great time. During the day I spoke to a lot of parents and carers and for the first time in my life started to understand how badly under-served disabled people are when it comes to sporting opportunities (and so many other things).

Afterwards, my best friend (also our club chair) and I discussed doing something to make our club more inclusive, and about the same time we were approached by the charity Access Sport and asked if we’d set up a disability section; obviously we jumped at the chance. I took on the responsibility of getting the new section up and running, and Forest Flyerz was launched in November 2011.

The Top of the D: What has the response been like?

Pani Theodorou: We didn’t know what to expect, but it’s been absolutely brilliant! There are two strands to the disability hockey project – the work within our own club and also the work with England Hockey to try and support other clubs to set up their own Flyerz section. I never would have imagined how involved I’d become, but when you see the impact on the Flyerz and their families – it inspires you to want to do more. Many of our Flyerz parents have said our sessions have changed their children’s lives – if that doesn’t inspire you, I don’t know what will.
The response from other clubs has been amazing too. There’s a lot of interest in Flyerz hockey – I think the hockey family is generally socially responsible, so coupled with the great volunteer ethic within the sport, I think disability hockey here will take off in a big way.

The Top of the D: What was the hardest thing about getting it set up?

Pani Theodorou: We had no real blueprint to follow and no disability experience; however we soon discovered there was nothing we couldn’t learn “on the job”. We also had very little coaching experience amongst our team of volunteers. It was tough finding the right coach to lead the session, as the coaches we approached were worried about doing something they had no experience of. We eventually did find someone, and she’s said that coaching at Flyerz has made her a better coach.

Another thing I struggled with for a long time was whether we were doing the right thing in having separate sessions instead of integrated sessions; with a bit more experience behind me I’m confident our Flyerz are in the very best place they can be. And whenever possible we talk to parents about integrating Flyerz members into mainstream sessions. 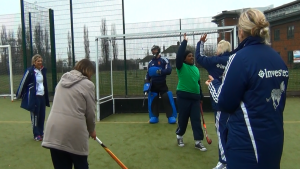 The Top of the D: Who has been instrumental/helpful in getting it all going?

Pani Theodorou: First and foremost, club members and Flyerz volunteers – the sessions wouldn’t be what they are without them. As well as being committed, they provide a warm and welcoming environment for everyone who attends our sessions – I’m really proud of our team. Also Access Sport, who supported us to set up, Walthamstow Academy, who let us use their facilities for free and of course EHB. Our partners are really important to us.

The Top of the D: What are the main things which stop people thinking they can follow in your footsteps and set up a similar team? How can they overcome these?

Pani Theodorou: From having spoken to many clubs it seems the biggest barrier is fear of the unknown. Many people are worried about what disability hockey is and not having the right experience of coaching disabled people; and “what if I say/do the wrong thing?” I used to say the wrong thing all the time and parents just laughed and corrected me – so long as they know you’re on their side no-one will mind the odd slip up!

I asked Flyerz parents what advice they’d give to other clubs, and one of them said “don’t be afraid of coaching disabled people, it’s the same as coaching anyone. You just need to have a bit more patience. And maybe our kids won’t progress as quickly as others, but they will progress”

To overcome any fears there’s no substitute to just doing it. With anything new it will require time and effort to get going, but there’s absolutely nothing to stop any club going for it. The rewards will far outweigh the effort.

The Top of the D: How does Flyerz hockey differ from other hockey? Rules? Pitch etc.?

The game format we play is similar to Quicksticks or In2Hockey – basically a mini game of 4 to 6-a-side, with goal-scoring allowed from anywhere. We allow helpers onto the pitch to support players who need it, and we also allow time-outs during the game. At the moment there’s no “official” Flyerz hockey format, but we find this works best for us. For players with physical disabilities, a game format played in zones might work better; but again, this very much depends on the players.

Eventually, it would be great to get to the point here in England where we can split into different categories, such as learning disability, physical disability, wheelchair hockey and perhaps visually impaired hockey; as each is best played with a different format. The FIH and all national governing bodies are aiming for hockey at the Paralympics – that day will come, and it would be great if England could play a big part in that.

The Top of the D: What sort of events have you had/got coming up? How can people get involved?

Pani Theodorou: In April 2013 we had “Hockey Nation 2013: An Inclusive Event”: an event for disabled and non-disabled players to train together and then play their own tournaments. The event was organised with several partners, including England Hockey who supported the event with 28 GB players. The GB players must have been a little apprehensive of the unknown, but you’d never know it as they threw themselves in with gusto and left a lasting impression on everyone. Both GB squads have promised continued support for the Flyerz project, so some of them will be at our next event, which is the Flyerz Festival of Disability Hockey on 20 July: all are invited! Alongside the disability tournament, all visitors will have the chance to try wheelchair hockey and other inclusive versions of hockey.

The Top of the D: What would you say has been the most positive experience/outcome of Flyerz so far? 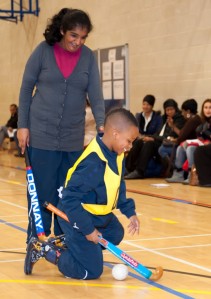 Pani Theodorou: There are so many examples; it’s hard to narrow down to one. A great story is about one of our young members who was very hard to get to know – he seemed to have a dark cloud over him and wouldn’t engage with anyone. During one session whilst we were doing some one-to-one training, out of nowhere he made up a funny high-five that we used through the session; it was a really special moment as it was the first time he’d really engaged. From that session forward it was as if the cloud had lifted and he became a different person – that was one of my favourite moments. It took over a year to reach that point, and that only came about through the support and patience all coaches and volunteers showed him; he’s come a really long way and I’m so proud of him.

The Top of the D: Why do you think clubs should get involved and set up their own Flyerz hockey?

Pani Theodorou: Because they’ll meet some of the most wonderful and inspiring people they could ever hope to meet! There are so many statistics and facts about lack of sporting opportunities, barriers to participation for disabled people, etc., but basically, it’s amazingly good fun and everyone involved in the sessions will get so much from it.

The hockey family is inclusive in so many ways: but to be truly fully inclusive clubs need to set up their own Flyerz and actively invite disabled people into their clubs. It could seriously change a lot of lives.

The Top of the D: In one sentence, sum up Flyerz hockey and why it is great!

Undoubtedly, the work Pani and her volunteers undertake is of huge importance to many people. Her efforts have been recognised by England Hockey, as she was named Club Volunteer of the Season at the England Hockey Awards dinner. She does not strike you as someone who would rest on those laurels, however.

If you would like to know more about Flyerz Hockey, you can email Pani at: flyerz@walthamforesthc.co.uk or contact her by phone on 07985 109002. There are also some helpful hints and tips here.