Posted on October 4, 2012 by thetopofthed 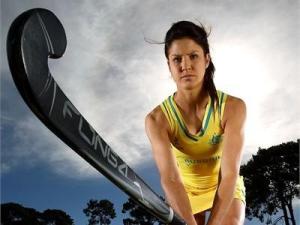 Anna Flanagan is one of the stars of the current Australia squad. The elegant defender already has a Commonwealth Games Gold Medal and impressed at this year’s Olympic Games in London, scoring twice as her team finished in 5th place. Away from hockey, the 20-year-old is studying to be a journalist. The Top of the D was delighted that she agreed to write this diary and give us a little glimpse into life as a Hockeyroo. Bonza!

“It has been another big month for the Hockeyroos since coming back from the London Olympics. We had a couple of weeks down time before assembling in Perth to begin training for the Champions Challenge. After living with each other for a month in London, and then going our separate ways after, it was so good to see everyone in the Hockeyroo family again.

During this time we were able to reflect and see what we had to do to move forward and how we would get closer to the teams at the top of the rankings.  After our break we resumed training with new goals and objectives in the lead up to the Champions Challenge in Ireland. 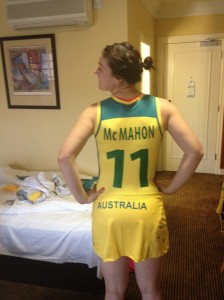 We arrived in Dublin with a slightly different team and a very excited debutant, Karri McMahon.  We had three practice games before the tournament against, Ireland, South Africa and India.

We have been working really hard both on and off the field to see how we can get more results from our opportunities. We won all these games, including out first pool games against, Belgium, India, and Wales

During our time away from the field, if we are not analyzing ourselves, other teams or performing group tasks, the girls have been able to get out to urban café, the team favorite. The local Tesco is also getting a fair workout as the only shop within a 10-minute walk!

We were treated to a team dinner outside the hotel after our last game against India, a pleasant change from eating in and a chance to get out of the hoodie and trackpants for one night. 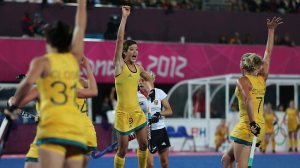 raining (most days) and made our own entertainment, in particular an impromptu dance party in room 244. On top of this a lot of series watching goes on, with Breaking Bad, Homeland, and Revenge the girls’ favorites. In some cases (like mine) we’re attempting to study!

We are now busy preparing for finals, and our last week in Ireland before we head back to Australia for our own national hockey league!”

Australia have so far won all their games at the Champions Challenge and will meet Scotland in Saturday’s Semi-Final. Flanagan has contributed two goals in the competition, including the first in today’s win over South Africa. In their current form, you wouldn’t bet against them winning the whole competition. The Top of the D wishes them luck.

You can find out more about Flanno by visiting her website here.

The Top of the D would like to thank Anna Flanagan for allowing me to publish this piece on the site.

Columnist for The Hockey Paper and the man behind The Top of the D. Writer, podcaster, goalkeeper and BBC Sport man. Used to work for Great Britain Hockey and have covered the sport at every major tournament.
View all posts by thetopofthed →
This entry was posted in Features, International Hockey. Bookmark the permalink.