Posted on September 20, 2012 by thetopofthed 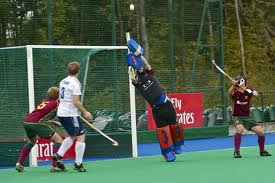 Regular followers of The Top of the D’s Twitter feed will know that when I am not on the treatment table or in the dugout, I am actually a goalkeeper. I have been a goalkeeper my whole hockey career, and I love it. Some people say that you don’t have to be mad to be a goalkeeper, but it helps. I don’t necessarily subscribe to this, but I do agree that goalkeepers are a different breed.

When you strip it down the bare bones, playing in goal is a bit daft. I mean, think about it: your job is to make sure you get hit by a small, hard piece of plastic, travelling at high speed. On the face of it, the line about being mad probably holds some water. However, personally, I see goalkeepers as highly skilled, fearless and very important to any team they play in. Good-looking devils we are, too.

Why play in goal, though? For me, it was a fairly straightforward choice.  Initially, no one wanted to do it. I volunteered, as a means of getting a guaranteed place in the team. The first game, I made a few saves and seemed to be reasonably good. After that, I was hooked.

It wasn’t just that I had performed reasonably well that made being a goalkeeper seem fun:

All the cool equipment that was on offer fascinated me. I started out, as most keepers did, with the basic school issue Monarch kit. I vividly remember the ball hitting me on the leg guard from a particularly fierce shot and being impressed that a.) it didn’t hurt one bit, and b.) the ball rebounded at such a speed, we were able to launch a counterattack. After that, I spent hours poring over catalogues looking at the new orange Grays equipment, dreaming of possibly getting the Simon Mason Union Jack Mercian kit or, dream of all dreams, somehow getting my hands on the Obo equipment, in the colour described as “acid” (Anyone who knows the colour I’m describing there is a true goalkeeper).

As you get older and start to play more regularly, the differences between keepers and the
rest of the team start to become more apparent: You train separately from everyone else for most of the session.  You are either in the team or you are out. There’s no switching from the right-hand side to the left because someone else comes along; it’s all or nothing. The parts of training where you join the rest of the squad, your team-mates spend trying to hurt you or hit you in the face “for fun”, and of course, people make comments about how you smell. That last one is the worst. Sure, there’s a distinct odour, but it’s a beautiful thing. Outfield players need to recognise this.

Whereas to an outfield player, knocks, bruises and injuries are an unwelcome nuisance, injuries to a No 1 are a badge of honour. Goalkeepers love to show off their latest bruise or cut, always with a great story about how they got it: usually a wonder-save at a key time in a crucial game. In fact, Obo recently ran a bruise competition that was flooded with entries. Goalkeepers are happy to put their bodies on the line for their team. As the mantra goes: a bit of pain never hurt anyone. Not a goalkeeper, anyway.

One of the best and at the same time, worst things about being a goalkeeper is the responsibility and pressure you’re under. If a striker misses an opportunity, they will most likely get another one in a few minutes. If a goalkeeper makes a mistake, more often than not, it is a goal. There are very few second chances. It is that sense of responsibility that makes goalkeepers that bit different. Each and every game, you are expected to concentrate to such a level, knowing that one slip from you could cost the team the game. Your job of covering up errors by those in front of you, knowing you have no safety net is of great importance. Not everyone has the character, determination and guts to shoulder that sort of burden.

Strikers grab the headlines because of their goals, but answer me this: would you have

more chance of winning a game with a bad goalkeeper, or a bad centre forward? The answer is obvious – to me anyway.

Goalkeepers have for too long been misunderstood. It is high time the rest of the hockey world cottoned on to a fact that the Keepers’ Union has known for years: Goalkeepers are amazing people.

8 Responses to Goalkeepers are amazing people.