Great Britain coach Mark Hager called on his side to find some consistency after goals from Grace Balsdon and Lily Owsley earned them their second win of the FIH Pro League campaign, a 2-0 victory over Belgium.

“Consistency is the key. We play Belgium next on their home turf so it’ll be a good test for us.” said the former New Zealand coach.

“We won today but can we back it up? Can the team learn to find consistency of performance? One good weekend doesn’t mean you’ll play well again next time, so we need to knit these performances together. We play the Dutch and Belgium next but you want to be playing the best in the world. You learn your strengths and weaknesses from those games and we’re definitely learning ours.”

After the disappointment of a shootout defeat on Saturday to Argentina, Great Britain showed their attacking intent right from the start. Hollie Pearne-Webb’s raking pass found Hannah Martin all alone in the circle but Aisling D’Hooghe somehow managed to smother her cross.

Mark Hager’s side were bright, energetic and used the pace of Owsley and Jo Hunter to get down the flanks and cause Belgium problems. They also left the back door open once or twice. Belgium’s counter attack was a real threat and more than once Ambre Ballenghien had the chance to get away, only to be repelled by some alert goalkeeping from Amy Tennant.

The second quarter wasn’t short of incident, either. Martin had the first clear sight of goal and let fly from just inside the circle, only to be denied by an excellent save from D’Hooghe.

Another driving run from Owsley won Great Britain’s first penalty corner. Grace Balsdon took the flick and it somehow crept just wide thanks to the defender on the line. GB were awarded another corner and thought they’d taken the lead. Balsdon’s flick was saved with the rebound falling to Laura Unsworth. Her backhand strike bobbled in but the crowd’s cheers were cut short when Belgium successfully referred for back stick and the goal was ruled out.

Martin and Sarah Robertson both drew saves from D’Hooghe and then Izzy Petter thudded a shot against the post. Great Britain were dominant but couldn’t find a way past the Belgian goalkeeper and it stayed 0-0 at half time.

Great Britain continued to press for the opener and in the third quarter they got it. A great run and shot from Hunter forced a penalty corner and Balsdon, marked her 50th international appearance with an absolute rocket of a drag flick, right into the roof of the net to send the crowd wild. 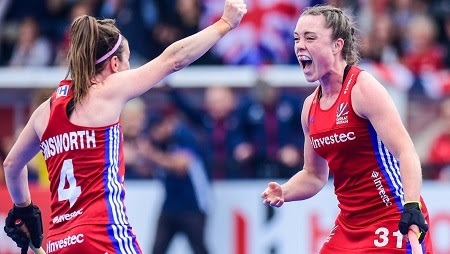 With a tough game against Argentina the day before, Great Britain could be forgiven for beginning to tire in the final quarter. Hager, however actually felt the back-to back games benefitted his side:

“This quick turnaround suits us more because we’re used to being in tournament mode. Sometimes it can work in your favour. You’re already match fit and you know what to expect from the day before. Belgium haven’t played for about four weeks so they came in cold, maybe that helped us as well.”

There was nothing tired about the second goal, which ultimately clinched the match. Owsley, who had a magnificent game, used her pace to carve open the Belgium defence with a long, driving run. She produced a world class finish with an unerring backhand into the roof of the net to wrap up the points and give Hager plenty to praise:

“The best thing is they played really well today. For three quarters of the game we controlled the tempo. There were little moments but we scrambled really well and that’s something we’ve worked on in training. We’re trying to create as many chances as we can, we maybe didn’t convert as many as we’d like today but their goalkeeper, give her credit she made some bloody good saves.” Beamed the former Australia international.

“I reckon we’re about 70% of where we want to be. We have a long way to go. There are some key factors we need to work on and improve.” he added. “We need to keep grinding away and train hard. I think we can be fitter and I think that’s an area we can make big gains in. That’ll help us with our skills, too as we’ll be less tired in the later stages of games. All in all though, I’m very happy with how today went.”