Posted on October 4, 2018 by thetopofthed

“I was pretty average and I’m not very pleased with my own performance.”

It’s not the statement you’d expect from a player who had just scored twice to fire Great Britain to a 2-1 win over Belgium, reaching 50 international goals in the process, but Sam Ward has high standards these days.

Ward forced his way into the international fold back in 2014 when his irresistible domestic form gave then Head Coach Bobby Crutchley no choice but to pick him for the England and Great Britain squads. Ward wasted no time in transferring that form to the international arena, scoring twice in a 3-1 win over Australia on his England debut at the 2014 Champions Trophy. 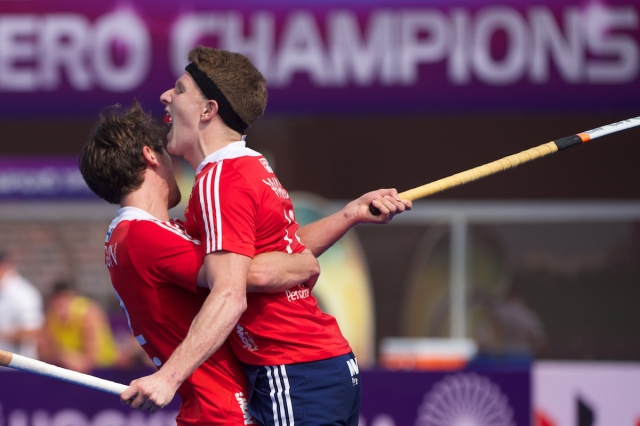 Then, he was a rough diamond, playing on instinct and playing catch-up to his senior team mates, physically and tactically. Now, with almost 100 international caps, three goals at the Olympic Games in Rio and 50 international goals under his belt, Ward is looking ahead to the World Cup and hoping to make a splash on one of the biggest stages hockey has to offer.

Despite his match-winning goals and his milestone, the Old Georgians striker was keen to draw attention to the role his team mates played in the victory over Belgium.

“I thought the boys were fantastic. Aldo [Alan Forsyth] was brilliant with his two assists; it’s great to be playing up front with him for GB.”

Forsyth, the youngest player to reach 50 Scotland caps, has proven himself in a similar way to Ward, with what seems like an endless supply of goals in domestic hockey.
There have been suggestions that the Great Britain squad can accommodate either Ward of Forsyth but not both. With both being out-and-out goalscorers, both being the main man for their clubs, it’s been suggested that this town ain’t big enough for both of them. Behind the scenes, however both Ward and Forsyth have worked on their all-round game. Simply put, as important as a goal scorer is, international hockey allows no passengers. It is not enough for a player not to contribute to all aspects of the game these days. Forsyth’s role in both of Ward’s strikes against Belgium show the strides both have made on that front and suggest the beginnings of what could be a very fruitful partnership.

“They were absolutely fantastic. Zach got man of the match and was brilliant it was well deserved. He played a key role in the first goal and all of them have big things ahead of them.”

Wallace’s driving run freed up space for Forsyth to find Ward for his first just after half time. And then Wallace and Forsyth combined again for the No13 to fire home via a defender’s stick for his 50th goal in international hockey.

“It’s something you dream of as a kid to score 50 international goals. If you look at it the tally’s quite a lot more for England so it’s nice to grab a couple for GB tonight.”

Despite his frustrations at his own personal display, Ward and his teammates played with a real spring in their step, in part due to the surge of enthusiasm generated by the arrival of new head coach, Danny Kerry.

“Danny’s been fantastic.” beamed the striker afterwards. “He’s brought a new spark to the team and it’s a real breath of fresh air. I’m really looking forward to the future under him.”

“The big thing for us is we’ve been so close to the top nations in the last few years so to beat one of them in a capped game is what we live for and need to do. That grows our confidence going into the Four Nations and then the World Cup and that hopefully will be where it comes together.”

One thing’s for sure: Danny Kerry’s brave new world will find a place for Ward and his goals. Here’s to the next 50!