By now you will have no doubt heard about Ben Rawson. Ben is the Denbigh Hockey Club player who sadly lost a leg to cancer.

Ben was struck down by a rare form of bone cancer called Ewing’s Sarcoma which affects fewer than 30 teenagers and young adults in the UK every year.

In order for him to begin to participate in competitive sport again Ben will need a blade prosthetic that allows him to run and jump. These are not available on the NHS for people over the age of 18. The cost of these can be in the region of £50,000.

England and Great Britain Head Coach Bobby Crutchley heard of the situation and offered to do something to aid the fundraising. With Crutchley’s strong links to the North of England the idea came up of bringing a Great Britain side to take on a North XI and that’s exactly what is happening on Tuesday 13 February, a 7pm start in front of a sold-out crowd at Brooklands Hockey Club.

As a means to get the hockey family in the mood for this fantastic event, The Top of the D can exclusively reveal the North Invitational XI.
Below are some of the best The North has to offer and they’ll be doing their all to keep the flow of international class at bay on the night in front of an expectant crowd. 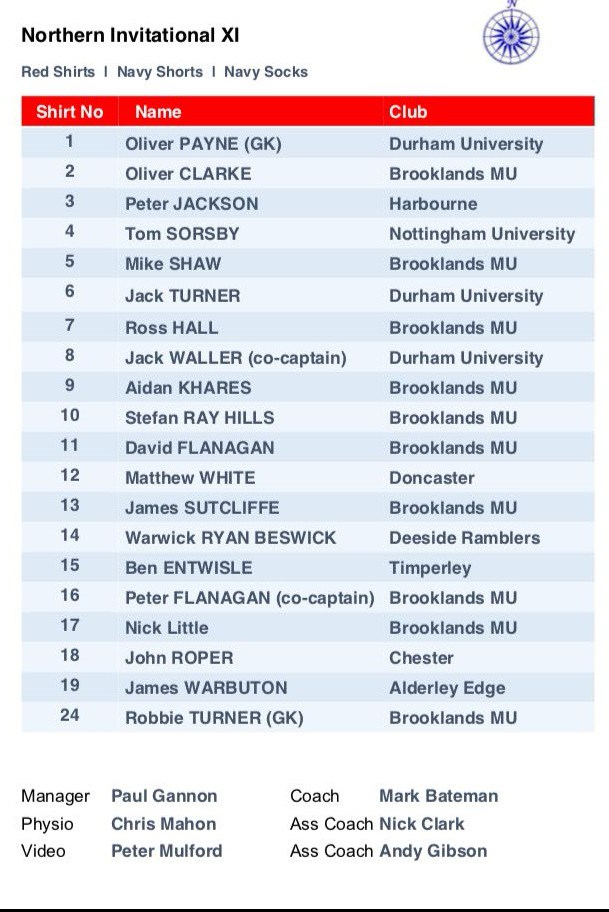 As well as unveiling the North Invitational XI I’m going to take a closer look at some of the players who’ll be sure to star on the pitch.

Jack Turner (University of Durham)
Jack Turner already has four senior international caps to his name and is one of the standout players of the Great Britain junior programme. A winner of the prestigious Sultan of Johor Trophy in 2015, JT has fast hands and some absolutely incredible stick skills. He loves a v-drag and will bring some individual flair to the party to add to the traditional northern grit.

David Flanagan (Brooklands MU)
I said in the first ever episode of Galvanised’s chat show “The Hockey Shed” that I’d like to see David Flanagan chip in a bit more for Brooklands this season. He has certainly done that notching an impressive seven goals in ten games in this campaign to help steer Brooky away from the foot of the table. An energetic player with an eye for goal Flanagan will be desperate to show the crowd what he can do.

Jack Waller (University of Durham)
Waller, who is one of the North’s two captains, is part of the Great Britain development programme and has won the Sultan of Johor Cup (2015) and collected a silver medal at the same U21 tournament in 2017. A dynamic player who cut his teeth at Whitgift and Wimbledon he’ll be the one still running up and down the field when everyone has long since run out of legs.

Pete Flanagan (Brooklands MU)
Since Doncaster’s finest Barry Middleton defected to the South to play his hockey; “Big Flan” has stepped into the role as The King in the North. The North of England’s answer to Jon Snow, at least in hockey terms, he scores penalty corner goals for fun. He’s most comfortable dictating play from the back but can step in wherever needed and keeps Brooklands ticking over week in, week out.

With a star studded Great Britain line-up taking on the North’s finest, this promises to be a game hockey fans cannot afford to miss. Whilst tickets are sold out, you can watch a live stream via this link and of course you can still donate to this fantastic cause by clicking here.

Good luck to both sides, and dig deep for Ben.