Posted on November 8, 2017 by thetopofthed

11 June 2017: Susannah Townsend’s pass finds its way to Alex Danson inside the circle. The England striker slams a shot past Netherlands goalkeeper Josine Koning and the Lee Valley Hockey and Tennis Centre erupts. It is Danson’s 100th international goal and it comes, fittingly, in front of a packed house at England’s home of hockey.

I was present for that landmark moment and felt a real sense of pride to see someone I admire so much breaking another record to go with all the others. My smile broadened further when I glanced over my shoulder to see Danson’s brother Edward, sporting a t-shirt with “100” written on it, going berserk in the crowd, her family were bursting with pride at her superb achievement.

I like to think I have perfected the ability to remain neutral when I write for this site, however when writing about Alex Danson I find that extremely difficult. Quite simply, she is one of my favourite players of all time. A wonderful striker, a lovely person and a true ambassador of the sport, not that she’ll ever admit it, the No15 is a true hockey great.

She made her international debut aged just 16 back in 2001. She has gone on to have a glittering career packed with goals, titles and medals, including the big one, the Olympic gold in Rio in 2016. It was the second successive Olympics where Danson finished top scorer but as usual, she was keen to deflect the plaudits elsewhere, such is her humble approach to life.

Whilst this shows the type of person she is, her humility means as an interview subject you don’t generally get the same answers you would from other people. I have interviewed the newly-named England captain dozens of times and spoken to her many other times off the record. In interviews we’ve developed a little game of cat and mouse where I try new and inventive methods of questioning to try and get her to take some credit and she finds new and inventive ways of making sure other people get the plaudits. In 2016, when nominated for FIH World Player of the Year alongside team mate Kate Richardson-Walsh, I asked Danson how she would feel were she to win it. “I’d be annoyed because I think Kate should get it” came her answer with a wry smile. Classic Danson! 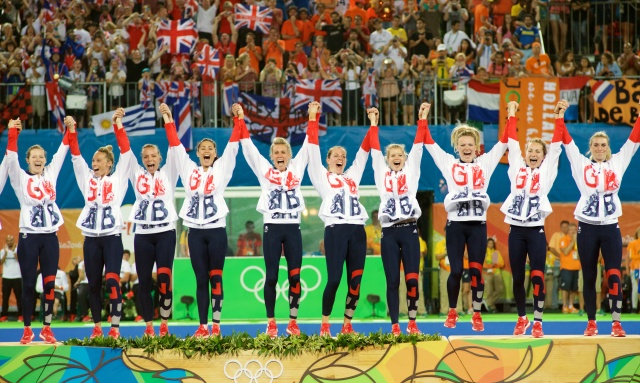 Recently, I asked her what she’d like her legacy to be, how she’d like to be remembered:

“That’s a really difficult question.” she sighs. “No player is ever bigger than the team. I will move on to the next part of my life and have some very fond memories, but I want it to be about the next group of players. That’s how I believe the sport will develop and grow. I will always look back and be grateful for the opportunities the sport has given me.”

“If people say anything about me I hope it’s that I was fortunate to be part of an amazing era of hockey and that I had a great group of people around me including some amazing teammates.”

I offer the alternative answer of “Danson knew where the goal was and won plenty of medals” but as usual, my question is met with:

“You can’t score without your teammates. You can’t be picked without them and you can’t improve without good coaching and hardworking people around you.” Classic Danson!

The No15’s international haul of 105 international goals puts her level with another all-time great, Jane Sixsmith in second place on the all-time list for England and Great Britain Women. Her next goal takes her ahead of Jasper, who Danson describes as “her hero”. 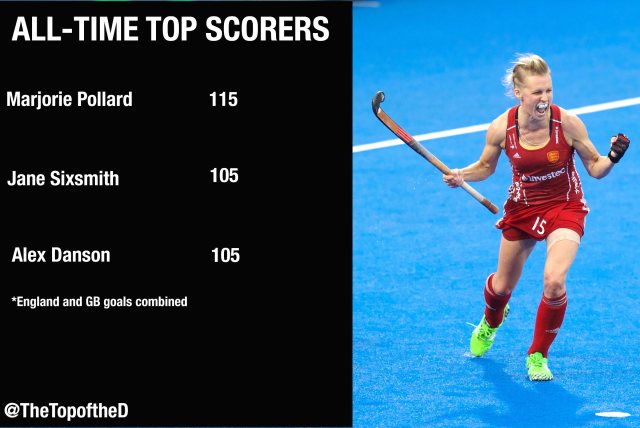 The 32-year-old’s international career has had plenty of ups and downs during its 16-year span but still she gets up every day with the same focus and determination she always has:

“The environment we live in is a massive privilege. I think we have the best programme in the world, but it is hard. I think people forget that when the players go off to a tournament we have players who are back home still training and being competitive and fighting to get a place for the next tournament. That’s why I still play. That competitive edge is what really drives me.”

“I believe in the last cycle we were successful because we had the best team. What keeps me going this cycle is taking up the challenge of being the best team once again. When we go to Tokyo we want to be world leaders. To play a part in the behaviours, forming our values, keeping our vision and doing it as a team and as a group of women is why I get up and train hard every single day.”

That Danson still has the same passion for the sport that the ambitious 16-year-old showed back in 2001 is a testament to the person that she is. A player so focused on the team and the common goal it is not hard to see why she has been so integral to Danny Kerry’s squads over the years.

As the team’s permanent captain, future generations looking at her legacy will aspire to have even a fraction of her commitment, humility and talent. She may not like to think that her performance as an individual is that worthy of praise or examination but to them, she will be a beacon, showing them what they need to do to win.

She will continue to inspire her team mates with her leadership and her team first attitude. And when the day comes for her to call time on her illustrious career, maybe then she’ll finally take some plaudits. Probably not, though. Classic Danson.

This entry was posted in Legends of Hockey. Bookmark the permalink.