England captain Alex Danson was “absolutely delighted” after her team beat Germany 2-0 to pick up the bronze medal at the Rabobank EuroHockey Championships.

“I’m so proud.” beamed the No15 as she spoke to The Top of the D post-match. “This has been a thoroughly enjoyable Europeans. We came into the game determined not to go home empty handed. It was a really professional performance from the team.”

England were under a little pressure early on from the Germans with Maddie Hinch alert to keep out a deflection from Teresa Martin Pelegrina but then England took control of the match.

A good move by David Ralph’s side won them a penalty corner which Giselle Ansley fired just wide and then Laura Unsworth’s slapped effort was well seen off by the Germans. 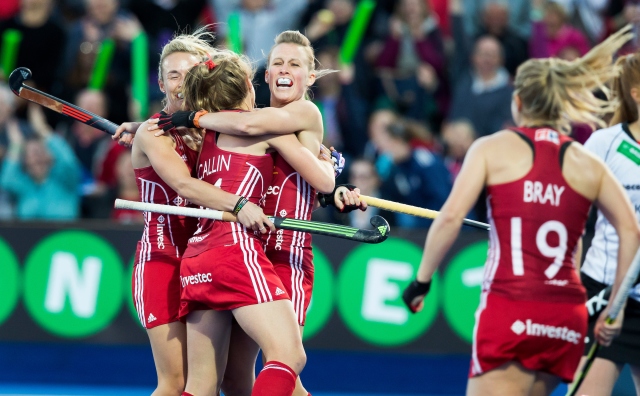 England were in the ascendancy in the second quarter and Danson linked well with Sophie Bray whose shot trickled agonizingly wide.

Martin Pelegrina had another chance but Hinch raced from her line to make a superb block.

A minute before half time England took the lead. Ellie Rayer broke free down the right and cut the ball inside for Hannah Martin. She dug the ball out from under her feet and calmly slotted it home to break the deadlock.

Whilst it might not have been a vintage England display, Danson knew even at the break that they were well prepared for the challenge:

“We knew Germany would be a good, physical, hard-working and very difficult side to beat. We did our homework and we knew it’d come down to mind over matter and working hard to get the win.”

The second half became a bit of a war of attrition with both sides aware the next goal would be crucial. Hinch saved well from Camille Nobis but chances were scarce.

The Germans stepped up a gear in the final quarter but England’s video referrals as well as the defensive work from the likes of Giselle Ansley and Hollie Webb were exceptional and they continued to close the door on Die Danas’ attacks.

With five minutes to go, Danson sealed the win with her 105th international goal. The No15 muscled her way in front of her marker to get to Bray’s cross first to fire home the goal that draws her level with Jane Sixsmith on the all-time list.

“I had no idea. She is my hero and when I was growing up I wanted to be her. I had no idea I was close. She is still is my hero and I can’t quite believe it! Jane inspired me to want to play as a kid so it’s a big honour to draw level with her.” said Danson when made aware of the feat post-match.

“We’ve played some exceptional hockey at times and at times haven’t had our just rewards for that. Today was the flip-side of it. We weren’t maybe at our best but with what we’ve done and what we’ve overcome I’m delighted to get the reward at the end.”

“It’s fantastic for these girls. Losing is a habit and so is winning. To come and win a medal at the tournament ingrains good habits so that the next tournament we know what these medal matches are all about. There are fine margins between winning and losing and you have to experience them to know what they’re about, so this will stand us in good stead.”

England’s bronze medal is their sixth of that colour and their tenth medal at this tournament overall.

They will now turn their attentions to supporting England’s men who hope to repeat the trick, also against Germany, tomorrow.