Captain Alex Danson declared herself to be “proud of her team” despite England slipping to a semi-final defeat at the hands of the Netherlands at the Rabobank EuroHockey Championships.

A goal from Dutch Skipper Marloes Keetels was enough to settle a high-quality match which England dominated for spells in front of a packed house in Amsterdam.

“I’m so proud to be part of this team tonight.” said Danson. “That was one of the best performances against the Dutch I’ve been a part of. They played exceptionally well and showed they are a fantastic team but overall, I feel proud to know that we matched them. We’re building and this team is very exciting and has a bright future. We’re obviously devastated but we’ll take a lot from tonight.” 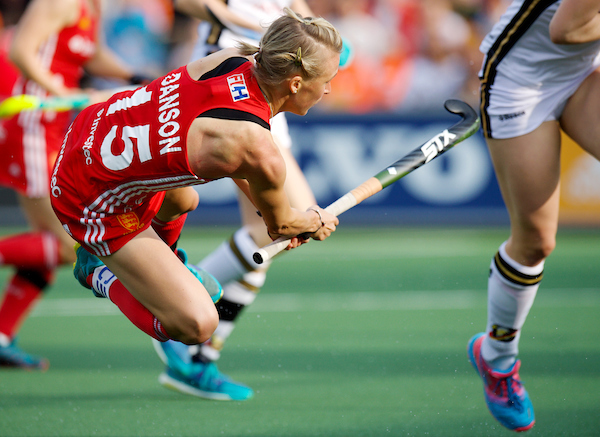 Danson and her team matched the Dutch with Susannah Townsend bringing an early save from Anne Veenendaal in the home goal before Shona McCallin produced a superb goal line clearance at the other end.

Danson stung the goalkeeper’s pads with a shot on the turn and then Sophie Bray was a whisker away from touching home Zoe Shipperley’s driven cross.

“Out of all the times I’ve played Holland that’s the most we’ve dominated against them.” Said defender Hollie Webb. “In a way, I don’t want to know the stats because it’ll be irritating. We must take the positives out of tonight. We dominated parts of that game and probably deserved a result. We have to work on some things. We have to put our corners away but if we get that right, the next game and the next three years are very exciting.”

With the sides still deadlocked in the third quarter the pressure ramped up. Maddie Hinch made a superb block from Frederique Matla and then Veenendaal kept out Giselle Ansley’s penalty corner and it looked like it would go to the wire.

With 11 minutes to go the deadlock was broken. Hinch made a fine block initially but the ball fell to Keetels who slammed it home to send the home crowd wild.

England threw everyone forwards but to no avail and the Dutch moved onto the final where they will face Belgium.

“I’m delighted with the performance of the team tonight. Playing against the World No1 in front of their 10,000 fans we really stepped up. We competed well tonight. Chances were limited and evenly split between the teams. Ultimately it came down to who could take one and unfortunately it wasn’t us tonight.”

“It was a wonderful occasion. We’re disappointed but overall, we’re proud of how we accepted the challenge and how we rose to the occasion. On another night, it could have been very different.”

England will now take on Germany and fight for the bronze medal with former manager John Hurst’s mantra ringing in their ears: “Always win your last game.”