England goalkeeper Maddie Hinch needs little introduction even to the non-hockey fan. The fearless, agile No1 caught the nation’s attention when her shootout heroics helped Great Britain to an Olympic gold medal in Rio in front of an audience of millions.

Hinch is now preparing to head to the Netherlands to try to recapture the European title England won two years ago. The 28-year-old, named FIH World’s Best Goalkeeper has been there, done it and got the medals as far as international hockey is concerned, yet she is still as determined as ever about the upcoming tournament.

“It’s great to be heading to Holland. It’s so exciting. This will be the toughest Europeans yet. All the teams in our pool are good so we will have to be really focused and take it one step at a time. We must be ready because everyone will throw everything at us.”

Drawn in a group with Germany, Scotland and Ireland, on paper and on rankings, England should have little problem getting through. However, hockey is not played on paper, something Hinch is keen to stress:

“Rankings these days mean nothing. The top 12 teams in the world all beat each other and this will be no different. Ireland and Scotland will always raise themselves against us and we must not only match that but raise ourselves more. We know they will come out all guns blazing and we must be prepared for that.”

“We have Germany in-between which is a tough game but it’s great for us. If you want to go on to the latter stages and beat the best teams you need to have been challenged and be bringing your best hockey.”

England go into the tournament as the champions after another shootout win over the Dutch back in 2015. Being the holders comes with its own pressures but the England goalkeeper is not worried by it:

“Being champions draws attention to us. We’re the side everyone wants to beat a little more. We can’t afford to fear it. We’re a different group to two years ago so we don’t have to prove anything, we have to establish ourselves again and play to our potential.”

As Hinch states, the squad is different now. Just nine of the group travelling to Amsterdam featured in that glorious triumph in London two years ago. The incoming players have impressed in a short time causing her to speak of their “huge potential” but also their need to “keep progressing.” 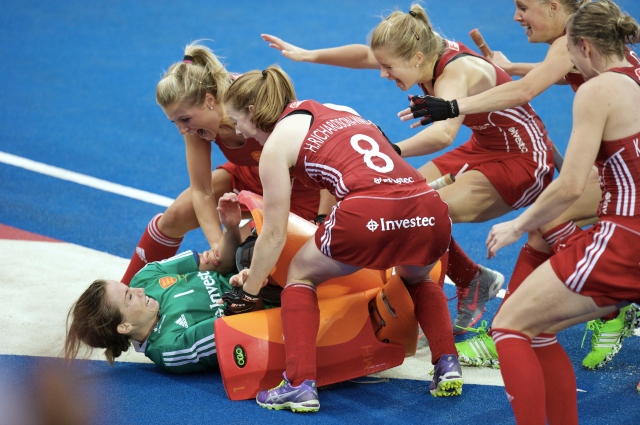 The Netherlands, where the tournament takes place has been Hinch’s home for the last domestic season. She has played her club hockey for SCHC alongside many of the current Dutch squad. Having seen the crowds first hand, she is certain it will be a spectacular event, albeit with some spice reserved for her and her teammates:

“Having spent the last season playing there the buzz around hockey is fantastic. There is no doubt they will host a great tournament.”

“If we play Holland there will be a hostile sea of orange. I have no doubt I’ll get some abuse but they are very respectful of good players and it’s all friendly really. We need to feed off that and upset the party. We need to get through the pool first, though.”

With the home fans, likely to be keen to see England fail, I ask the inevitable question. England vs Netherlands in the final. It goes to shootout. How does Hinch rate their chances?

“I’d fancy us in the final if it went to shootout because we’ve been there before. We’d rather get it done before that though. I think we can go all the way. We’re capable and we showed that in patches in South Africa. What we need to do is start to string those performances together. If we can do that, who knows what we can achieve?”

One thing is for sure, if it comes down to a Netherlands vs England final the Dutch will not want it to go to shootout. Déjà vu, anyone?

Columnist for The Hockey Paper and the man behind The Top of the D. Writer, podcaster, goalkeeper and BBC Sport man. Used to work for Great Britain Hockey and have covered the sport at every major tournament.
View all posts by thetopofthed →
This entry was posted in Eurohockey Championships, Features, International Hockey. Bookmark the permalink.