England maintained their 100% record and South Africa got themselves a morale boosting win over Scotland. All the details of the day’s action in the men’s competition of the Investec London Cup are below.

Goals from Austin Smith, Wade Paton and Jean-Pierre De Voux were enough to muster South Africa’s first win of the competition with a hard-fought 3-2 victory over Scotland. Fabian Gregory’s side led 2-0 at the break and then 3-0 shortly after but Dan Coultas’ penalty stroke and a 48th minute goal from Wei Adams ensured Scotland were in the game till the very end. 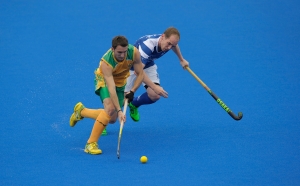 Scotland were unlucky not to go into the lead in the first half. Kenny Bain showed good skills to get away on the baseline and his cut back was crashed into the woodwork by Nicky Parkes.

Jamie Cachia in the Scotland goal made a splendid save from an early penalty corner and then his opposite number Rassie Pieterse showcased his skills with a good save to deny Bain.

With 17 minutes on the clock, the deadlock was broken. Smith fired in an excellent drag flick that evaded Cachia and went in off the post. Two minutes later it was 2-0. Wade Paton was allowed a simple finish from close range after a cut back from the baseline.

Cachia denied Smith from another penalty corner and then De Voux crashed an effort against the post with a splendid reverse stick strike, ensuring it remained 2-0 at the break.

It took just eight minutes of the second half for South Africa to seemingly make the game safe with a third goal. Taine Paton showed terrific skill and composure on the baseline and allowed De Voux another simple finish tapping in from close range.

Two minutes later, Scotland hit back. Niall Stott drove into the D and was fouled as he was about to shoot, resulting in a penalty stroke. Coultas stepped up and made no mistake, reducing the arrears. Scotland then made sure the final 22 minutes would be very tight with the best of the goals in the game. A diagonal cross from the right was deflected superbly into the roof of the net by a sliding Adams giving Pieterse no time at all to react.

The game became a little heated and there were cards flashed at both sides by the umpires, reducing South Africa to nine at one point.

Scotland threw caution to the wind and pressed hard for an equaliser but the closest they came was when a sliding Gareth Hall just failed to get a touch to Niall Stott’s right wing cross. South Africa held on for their first points of the competition and will face the same opponents in the battle for 3rd/4th place tomorrow.

England maintained their 100% record with a solid performance to run out 4-1 winners over Craig Fulton’s Ireland in what was a dress rehearsal for tomorrow’s final. Goals from Barry Middleton, Alastair Brogdon, Harry Martin and Henry Weir’s second international goal did the damage whilst Ronan Gormley pulled one back for the Green Machine. 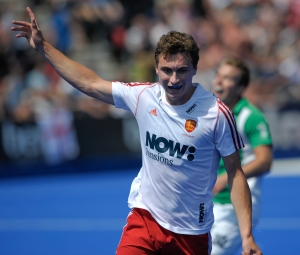 England were first to have a clear shot at goal but Conor Harte swallowed up the ground from the line to the top of the D to charge down Jackson’s penalty corner. At the other end, Dan Fox did likewise for England before George Pinner bravely saw off the rebound from Stephen Cole.

With 11 minutes on the clock Middleton gave his side the lead. Weir’s cross from the left found the England captain who applied the finishing touch, with the ball just creeping over the line. Jackson, who was dominating the middle of the pitch had a good chance but his reverse stick effort went just wide. Pinner was called on again and made a splendid save diving to his right to push away Mikey Watt’s effort from the top of the D.

England hit Ireland with two goals just before half time, Brogdon applying the finishing touch from close range and then Jackson showed terrific vision to set Martin free and with the defence backing off the Beeston man found the bottom corner with a lovely strike.

After the break Ireland reduced the arrears seizing on a rare lapse in the England defence. An aerial pass from the right found Gormley all alone in the D and he coolly slotted home to make it 3-1.

David Harte in the Ireland goal pulled off an excellent save to deny Brogdon his second but it wasn’t long before England made it 4-1. Henry Weir in nosebleed territory snuck in and finished from close range for a rare goal.

Jackson almost made it five with a searing penalty corner that crashed against the crossbar and bounced out before Pinner used every inch of his giant frame to turn a Shane O’Donoghue flick round the post, another top class save from the giant goalkeeper.

England celebrated another win in the competition but will expect a sterner test from Craig Fulton’s team in tomorrow’s final.