The first competitive games at the new Lee Valley Hockey Centre took place today in the Investec London Cup. Ten goals across two games ensured the crowd had plenty to cheer. Reports on both games are below.

Kathleen Taylor went down in history as the first player to score in a competitive fixture at the new Lee Valley Hockey Stadium as her brace got South Africa off to a winning start against Scotland in the Investec London Cup. Taylor struck in the 15th minute and then sealed the win with a second five minutes from time.

The game was a fairly even contest with Scotland threatening first. Ailsa Wyllie drove through the heart of the defence and fired a low shot in that goalkeeper kicked clear. The rebound worked its way to Nikki Kidd but Anelle van Deventer made a solid glove save to see it off. Van Deventer then saved well from a Kidd penalty corner as Kurt Cerfontein’s side weathered the early storm.

South Africa forced their first penalty corner on 13 minutes but the slap from Lisa-Marie Deetlefs went wide. Two minutes later they took the lead. Taylor showed good awareness to pounce at close range to prod home a rebound off the goalkeeper after good approach work from Tarryn Bright.

Scotland thought they’d drawn level soon after but Ali Bell’s reverse stick effort was ruled out after she was deemed to have used the back of her stick in the process of shooting. At the other end Gibson did well to save a snapshot from Dirkie Chamberlain, leaving it 1-0 at the break.

The second half was a somewhat scrappy affair with both sides turning the ball over regularly. Gibson did well to repel an effort from Lilian Du Plessis and they squandered a series of penalty corners whilst her opposite number Van Deventer produced a top class save to deny Kidd from another penalty corner at the other end.

Scotland were denied once again by the whistle; a lovely move resulted in Nikki Lloyd sliding in to try and apply the finish but the umpire thought she had spotted an infringement and gave a free hit. South Africa capitalised and swept up field to make it 2-0 and secure the points with Taylor’s second.

The win sets the South Africans up well for their second game, against England where they will be looking to repeat their World Cup win from last month. 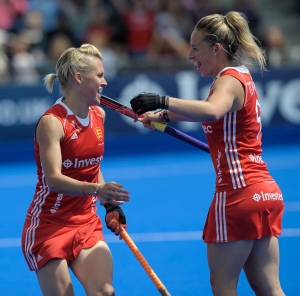 Seven different scorers did the damage as England fired in four goals in each half, taking full advantage of the gulf in class between the sides ranked 6th and 32nd in the world.

With confidence at a low after the disaster at the World Cup, England, led by Caretaker Coach, Danny Kerry needed an early boost. They got just that when Danson turned in a left wing cross to make it 1-0. Visibly lifted, England pushed again and Ria Male made an excellent block to keep out Susie Gilbert. It wasn’t long before England made it 2-0, however as another cross from wide found its way to Bray at the far post who applied the finish.

Wales forced a flurry of penalty corners but from the pick of them Elie Barnes’ fierce shot was well saved by Maddie Hinch. With ten minutes to go before the break, England made it 3-0. A nice run around the left side by Bray forced Male into a save, the ball broke to Townsend who picked her spot and coolly slotted home. There was then nearly a fairy-tale moment for debutante Lucy Wood as she hit a good shot on the turn that was diverted in by Unsworth from close range to make it 4-0 at the break.

England somewhat lost their way at the start of the second half as Wales dug in. It took a little time to refocus with the game surely safe. Male, who had a fine game in goal made a good stop from Georgie Twigg and then she kicked clear from a Wood deflection and saved well from Bray as England resumed their control.

With 17 minutes remaining Bray cut the ball back from the baseline and found Watton, her effort squeezed past Male with Susannah Townsend in close attendance, but it was undoubtedly Watton’s goal.

England continued to dominate with Kirsty MacKay, a half time replacement for Hinch in goal a mere spectator. Richardson-Walsh made it 6-0 with a deflected penalty corner which was followed by the pick of the bunch from Alex Danson. The No15 picked up the ball on the right from an aerial pass and jinked away from her marker. She continued to head to the D, beating another player with some 3D skill before firing a lovely reverse stick shot into the far corner. Ansley completed the scoring with a drag flick from a penalty corner with just three minutes remaining and England had their winning start to the competition.