England captain Barry Middleton has said Friday’s World Cup semi-final with the Netherlands is a chance for his team to “write their own history” as they aim to capture their first gold medal in a major competition since the European Championships in 2009.

After their dramatic win over Belgium in what was effectively a winner-takes-all final pool game, Middleton was asked about the London Olympics and the semi-final thrashing his Great Britain side endured at the hands of Paul van Ass’ men that fateful night.

“It’s great to make semi-finals but a few of us have been through this before. London keeps getting brought up, we thought we’d got rid of it, so thanks again for coming back to it! We’ve already said it’s in the past and we want to make our own history so we don’t get asked that question anymore.”

For a few of England’s squad, the chance to make amends for the 9-2 thrashing in the Olympics would seem, on the outside to be a great motivation for the semi-final. Middleton however views it as water under the bridge:

“We’re a different team now. Of course we have learnt from games like that, but it doesn’t dominate our thoughts. As Bobby’s said already, this group has been together 18 months or so and it’s learning fast. We’ll put together a plan to combat Holland and take the game to them. I think Jon Bleby is on about plan F or G now so we’ll see what he comes up with and find a way.”

As in London, the task is an uphill one. The hosts have won all bar one of their games, a draw in their final pool match with New Zealand. They have scored 14 goals and conceded just four.

That final pool game offers an insight into how to knock the Dutch off their stride, however. Crutchley’s team will have watched that game with interest and must take lessons from the Blacksticks’ game plan. Dutch coach Seve van Ass, clearly rattled in the aftermath remarked that the Kiwis “ruined the game” whilst Colin Batch, who orchestrated the draw made no apologies, explaining that setting up any other way is suicide for most teams in world hockey. Batch’s masterplan was founded on a solid defensive display and denying the Dutch the freedom to impose themselves. Fortunately, the Australia game aside, defence has proved to be one of England’s strengths. Goalkeeper George Pinner told The Top of the D after the Belgium win: 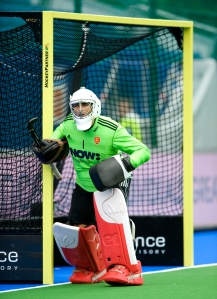 “We have some of the best, world class defenders around. When you say the list of our great players these ones may not get mentioned, but I’ll tell you, people like Mikey Hoare, Dan Shingles they put everything on the line for the boys as do the rest of the team, even the ones who aren’t here. That’s why we win games, because we want it so much.”

The cauldron of noise England will come up against will surely play in the Dutch’s favour: 15,000 fans “out to get England” in the skipper’s words, but as his goalkeeper says, these are the games every player wants to play in.

“The occasion brings out the best in the lads. That’s the reason you play hockey. 15,000 people watching? It was noisy against Belgium so imagine what that’ll be like. What a game! How can you not look forward to that? We have 18 quality players fighting for each other. We thrive on these situations because we want to prove to everyone how good we are.”

Come Friday we will know whether England will compete for a gold, or a bronze medal. A tough assignment, of course, but these are the games you have to win in order to win a World Cup.