Another day of top class action in the Rabobank Hockey World Cup draws to a close. History for Argentina’s men, disappointment for Germany’s men, the USA machine keeps rolling on and England’s women join the party. All the quotes of the day are here.

Agustin Mazzilli, Argentina:
It’s the first time we’ve ever made the world cup semi-finals. We are determined to show everyone what we can do. We have a good defence and Pelliat is in great form on corners. We need to sort out our discipline though. We cannot afford to lose players in the next game.

Markus Weise, Germany:
It was a professional display. Even though we knew we couldn’t make the semi-finals we still played very well. Obviously it is a great disappointment but to score six times despite this is something to be proud of.

Lauren Crandall, USA:
We didn’t come out the way we wanted to, luckily it’s a team sport and each of us stood up when it counted. That’s not how we want to start games and I’m accountable. Luckily my teammates stood up and helped me out and we got a win. All we can do is keep on playing. If one minute doesn’t go the way you want it, you just have to see what the next brings.

Jamilon Mulders, Germany:
It’s always possible to win but today we performed in the second half very poorly. Perhaps England played well but we seemed to have no idea how to get back into the match. It’s not the time to talk about the system we run it’s about me and the tactics. I gave the girls the wrong plan and it’s very disappointing but it’s my fault.

We made a lot of mistakes by trying to put Kate under pressure. We didn’t put her under any pressure. It was the wrong solution by me. The ladies are devastated but I hold my hands up. 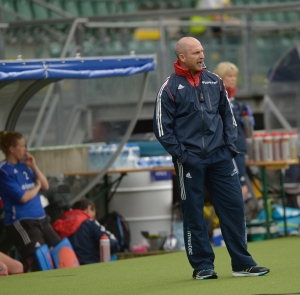 Jason Lee, England:
The problem in the opening games for us was that we tried to play open, attacking hockey. When we didn’t take our chances it made it very difficult for us to pick up the wins we needed. When you play that way you leave yourselves open to conceding goals, so if you are unable to take your chances, you lose games.

Against Argentina and again today, we went back to basics and closed the games down. We were much more compact and much tighter which gave us a chance. We were a bit unlucky against Argentina but today we put away our chances and were much more difficult to break down, meaning we picked up the win. I’m pleased for the girls, but not pleased with how things have gone overall.

Apart from the two Dutch sides and England’s men, all the European sides seem to have struggled in this tournament. You wouldn’t have predicted Germany’s men to not make the semi-finals and you probably wouldn’t have predicted us to do as poorly as we have. I don’t know if there’s any significance in the European sides struggling but they have done.

Susie Gilbert, England:
It was the win we’ve been looking for throughout the tournament. We’ve obviously been bitterly disappointed throughout the last ten days so it’s nice to get that win finally.
We focus on the task in hand now. We’ll recover well tomorrow and focus on Belgium. We need to play with no fear going forwards and defend diligently like we did in that game. We took it to Germany and played with confidence. We showed we can create opportunities and score goals. That hasn’t happened for us so far but we proved what we can do today.

We’ll approach Belgium the same as every game. We’ll prepare professionally, we’ll stick to the task and we take it to them.

We finally ground out a win which was nice. We put away our chances today, although we didn’t get many. Germany are a strong team but we managed to take the openings we created.

We still felt we had something to prove in this tournament. We’re still ranked three in the world and there’s a lot of rivalry with Germany so we wanted to play well and put a stamp on the tournament, even at this late stage.

We know we’ve created a lot but not put them away. It was nice to hear the ball hit the backboard at last and we hope to take that into the next match, too.

For me, this is the first international tournament where things haven’t gone to plan and we haven’t won the games we should. It’s been a massive learning curve for all of us and will only make us stronger as a team. If we go a goal down we know we’re still in the game. There’s a lot we can take away from this tournament and take to the commonwealths in a few weeks.

You learn a lot from losses. It’s not a great feeling at the moment but hopefully we can look back and see this is as the making of this team and come out of the next tournament with a medal.

Ellie Watton, England:
It’s nice to have the win obviously. It’s been tough up to now, especially after the Argentina game having almost got a draw out of it, it’s really nice to get a win at last.

It’s been a tough first tournament for me. I’ve enjoyed parts of the experience. Losing is a big disappointment but we’ve come back to get the win today which is nicer for all of us. It’s been a real learning curve and I hope I get a lot from it.

We need to learn from this. We know we can pick ourselves up and get the wins. We need to fight hard which we’ve done and perhaps the luck hasn’t been with us but we’ll come back stronger.

I’ve been optimistic for every game. We have the ability to win these games; it just hasn’t gone our way. It’s great to get a win, and especially on my birthday!

Delfina Merino, Argentina:
It was a close game, we couldn’t find the goals we needed but we aimed to get to the semi-finals and that’s what we’ve done. We’ll try to fix a few things and be better in the next game.

We thought we might play Holland in the final but it will be like a final. It will be ok for us. We will prepare, fix what went wrong today and be ready.

Simon Child, New Zealand:
It was a fantastic game for us and great for us to play in such an atmosphere. It’s nice to score goals on the big stage so I’m really pleased about that. We’ll relax for the day tomorrow, then be back and focused for the next game and we’ll be ready.