England’s nightmare World Cup continued as they slipped to a third consecutive defeat of the tournament to a South African side ranked eight places below them in the world. Goals from Kathleen Taylor, Sulette Damons, Shelley Russell and Dirkie Chamberlain gave Giles Bonnet’s side a 4-1 victory with Nicola White striking a consolation for England. 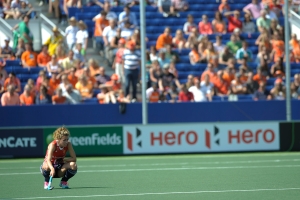 England actually started the game brightly. With three minutes gone Lily Owsley linked up well with Ellie Watton, breaking into the D on the right only to see her shot come back off the post and rebound to safety. Sophie Bray had a good chance in the early exchanges, too. The No19 skipped away from the defender with some lovely 3D skills before firing a reverse stick effort over the bar.

England thought they’d taken the lead just before the quarter hour mark. Zoe Shipperley’s fierce penalty corner strike was well saved by Anelle Van Deventer and although Susie Gilbert stabbed the rebound in, it had struck an England foot and the goal was ruled out.

South Africa started to look dangerous on the break, bursting forwards in groups and putting England’s back line under pressure and from a fast break they took the lead. Hollie Webb almost turned the cross into her own net, drawing a save out of Maddie Hinch but Kathleen Taylor was alive to the situation and forced the rebound home.

With three minutes left in the half it got even worse for Jason Lee’s side. Sulette Damons robbed Webb inside the 23 and took full advantage, ripping a fierce reverse stick shot past Hinch for a 2-0 lead at the break.

With England’s confidence visibly draining South Africa punished them with an excellent second half display. Four minutes after the break a lovely cross from Nicolene Terblanche was turned in superbly by a sliding Russell. Giles Bonnet’s team continued to press and Damons, who was lively throughout, went close to another goal, but she was thwarted by an excellent save from Hinch, dashing from her line to make the block. The England goalkeeper was called upon again to keep out an effort from Chamberlain but with 18 minutes remaining, she was powerless to stop the same player beating her with a chipped reverse stick effort from close range.

Three minutes later England grabbed a consolation. Shipperley’s excellent reverse stick cross found its way to White who finished superbly, but it was all in vain and England were well beaten.

A disappointed Susannah Townsend told The Top of the D afterwards:

“It’s the story of our tournament really. We started very well. We took it to them and we had chances once again but then we were sloppy and you can’t deny they deserved to win. If you take your chances you win games. Unfortunately we haven’t done that. It’s not a reflection of the ability in the group, we are a fantastic team but it’s disappointing we aren’t showing it on the world stage.” she added “We’re not taking care of possession well enough and we’re conceding poor goals which we haven’t done for a while. We need to have a look and find out how to fix where we’re going wrong. Now we have to rely on the character of the team, pick ourselves up and set new goals now we can’t win a medal. We need to ensure this does not happen again.”

England’s next game is on Sunday against Argentina who today beat Germany 3-0.