World Cup 2014: The Top of the D meets Zoe Shipperley. 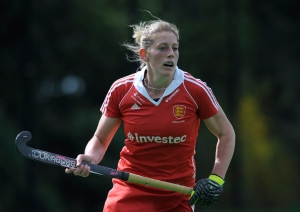 This year has been something of a fairy-tale for Zoe Shipperley: She scored the all-important goals to send her club side Buckingham into the Investec Women’s Premier League via the playoffs at the fifth time of asking, she made her international debut and now, after Jason Lee’s squad was announced, the 24-year-old is heading to the World Cup.

“It’s all been a massive shock. Buckingham winning the playoffs was always in my mind but everything else happened so quickly, I’m sort of running with it and hoping it continues to go well.” she said. “My parents are going away on holiday and I’d planned to be at home to look after their dog during the World Cup. All of that had to change quite quickly, so you could say I wasn’t prepared to be selected at all!”

Until recently, Shipperley was employed at St Edwards School in Oxford; however with the demands of her hectic hockey commitments and the offer of going full time in the Central Programme she faced a choice about her future.

“St Edwards made it very easy. As soon as they found out they told me I had to go for it. Teaching is something I want to do in the future but the opportunity to do that will always be there. This chance wouldn’t, so they really encouraged me to go for it and they’ve been fantastic.”

St Edwards didn’t have to wait long for their faith in the Buckingham skipper to be vindicated, and now she will be lining up alongside Kate Richardson-Walsh in the backline for England in The Hague. The England Captain is someone Shipperley is still slightly in awe of:

“I sometimes find myself during games wanting to ask her things, which I know isn’t the right moment! She is so calm and controlled I spend most of the game thinking everything’s happening so quickly whereas she takes it all in her stride and never seems to be rushed. Learning from her and the others in the back line is amazing. I’m so lucky to have played in her era and it’s unbelievable.”

Despite her seemingly wide-eyed take on her early days in international hockey, Jason Lee, the England Coach heaped praise on the No27 telling The Top of the D:

“Zoe is extremely strong and determined and reads the game very well. She’s also really powerful. It’s not that common in women’s hockey to have someone with the power she has. She’s strong on the ball and makes a great range of passes. She deserves to be in the squad. If anything it’s a pity we couldn’t have got her in earlier, perhaps that would have decreased some people’s concerns about her level of experience.”

Shipperley identifies Argentina and Germany as the sides to watch out for in the tournament, but also highlights the current good form of Craig Parnham’s USA. Understandably she is excited about the tests ahead:

“I’ve never played most of these teams, so experiencing their different styles and the challenges they pose will be great. The stadium too, looks unbelievable. I’m used to playing in front of about ten people and my mum and dad so the atmosphere will be something different for me, but something I’m really looking forward to.”

After the perfect domestic season, I ask the Buckingham skipper if she would trade her club side’s success for a World Cup winner’s medal, the answer is not taken lightly:

“I’d choose the World Cup. Buckingham and the girls mean everything to me but playing for your country is something special. If I could bring home a medal from my first tournament, especially a gold medal it would be amazing.”

Of course Buckingham’s achievements cannot be taken away, but England fans will still be hoping Shipperley picks up that gold medal to cap her perfect year.

The Top of the D would like to thank Zoe Shipperley for her time and good humour in conducting this interview.