With the Rabobank Hockey World Cup drawing ever closer, the excitement is building every day. Well, for me it is, anyway. The Top of the D has already given you the lowdown on who will be the pivotal figures in England’s quest to capture the trophy in Bobby Crutchley’s Key Three. Who should England be fearful of? Which players will the other countries be looking to for their chance at glory? Find out here. 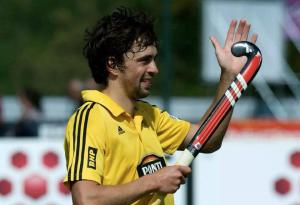 Tobias Hauke, Germany.
He is the current FIH World Player of the Year so no real surprise to see him in the list. Hauke has two Olympic gold medals, a European Championship gold and a Champions Trophy gold already in his trophy cabinet as well as silver medal in the last World Cup in 2010. Another gold this summer would do very nicely to complete a fantastic year for the Harvestehuder man. He has won the Indoor European Cup, the Euro Hockey League and the Bundesliga title with his club side in 2014 and will be confident of putting the icing on the cake in The Hague.
Hauke is supremely talented. His skill on the ball, range of passing and defensive abilities are second to none and he is a pleasure to watch. He operated in a sort of quarterback role for Harvestehuder, providing a defensive shield in front of the back line and dictating the play from there when they had possession. The role allows him to pick up the ball deep in his own half and pick people out as well as every so often, bursting forwards dangerously from the back. He hardly wastes a pass and with Germany’s array of attacking talent ahead of him, Hauke will be supplying plenty of ammunition for the strikers to work with.

Mink van der Weerden, Netherlands.
Van Der Weerden first caught the eye with his 13 penalty corner goals in the Junior World Cup in 2009. Inevitably, for a Dutch drag-flicker he has been compared with the great Taeke Taekema. Whilst he has said he is flattered with such comparisons, he is keen to make his own mark on the world game. He has already done that to a degree, finishing as the top scorer and a silver medalist at the London Olympics, but what is striking about Van Der Weerden is his determination to become a better player. Set piece specialists of his ilk are often accused of being one-trick ponies, who are hidden during open play and kept on the pitch for their penalty corner abilities. The Oranje Zwart man has worked extremely hard on his all round game to ensure he is not one of those, too. His ability at penalty corners is his strongest suit, but he is also quick, powerful and energetic, breaking forwards from the back and showing plenty of ability for the current Dutch club champions. He will be ready to show the world he is more than just penalty corners, this summer.

Facundo Callioni, Argentina.
I have a sneaky suspicion that Argentina could be one of the surprise packages in the World Cup. They stood up to the big guns well in the World League Final, beating Belgium 3-2 and the Netherlands 5-2 in the pool, although they did somewhat run out of steam in the latter stages of the competition. One of the features of Los Leones’ play is their swift counterattacking style. They attacked teams at pace and caused them real problems. Callioni showed himself to be a fine a exponent of their style of play, popping up with some outrageous goals like this one:

He scored four times in the World League final and with his predatory instincts and his fearlessness in the circle, if Argentina are to spring a surprise in the World Cup Finals it could well be Callioni’s goals that allow them to do it.

Jake Whetton, Australia.
Such is the star-studded nature of Australia’s line-up you could almost pick out any number of their squad as a “one to watch”. Whetton is a player whose progress interests me greatly, however. The 22-year-old is the  second youngest member of the Kookaburras’ squad and is playing in only his third major tournament at full international level. He is the epitome of youthful exuberance on the field. Full of running, plenty of skills and tricks up his sleeve and crucially, he also has a real knack for finding the net: He has so far scored 23 times in 53 international appearances. He might not steal the show in a hugely talented line-up but the Queenslander will definitely not look out of place, either.

Tom Boon, Belgium.
What an exciting talent the 24-year-old is. Scorer of spectacular goals, strong on backhand and forehand, pacy, skillful, brave, Boon has the lot. He is also one of the best penalty corner specialists around.
Since making his debut back in 2008 he has been one of the main players in Belgium’s meteoric rise up the world rankings. Over 100 caps to his name and bags of goals, Boon comes into the World Cup brimming with confidence after a wonderful debut season at HC Bloemendaal, where he scored 23 league goals. Belgium have announced themselves as a major force in world hockey and Boon is the man who holds the key to a successful competition for them.

That covers the players to watch in the men’s competition. Log on to The Top of the D homepage for more World Cup 2014 build up in the coming days. Or, if you’d prefer, you can follow me on Twitter and get all your World Cup countdown from there.