Scotland bounce back to take first win at Champions Challenge I.

Nikki Lloyd, the Scotland and Canterbury star has enjoyed a fantastic season at club level, playing a pivotal role in her side finishing top of the league and securing European qualification for next season. She also grabbed a much-coveted place in The Top of the D’s Team of the Season!
Lloyd and her partner in crime, Nikki Kidd missed the domestic playoffs as they were preparing for a big summer of hockey for Scotland, starting with the Champions Challenge I and then the Commonwealth Games. Rather than me writing about the competition, I asked the 27-year-old if she’d be willing to contribute some thoughts to the site instead. So here, without further ado is her version of the win over India. Enjoy! 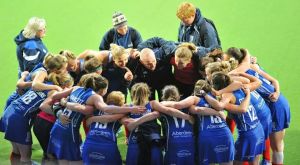 We knew that this was a must win game, not only for placing in the group stage but also for team confidence. Last time we played India in the Champions Challenge we beat them on shootout, however the team has progressed so much since then, so we went into the game believing in our tactics and match plan. The crowd, too gave such amazing support and lifted us for the entire game.

The first goal came from Nikki Kidd, a shot from the right side of the D on a tight angle. Just before half time Emily Maguire scrambled the ball home after strong play from Sarah Robertson.

We knew that we had the ability to keep the high work rate up for the second half and as a team we really came together. Further goals came from Vikki Bunce and Becky Ward through two well-worked penalty corners. We could have had a few more goals but failed to make the final pass count.

It was a fantastic team performance and we had a very happy coach afterwards, Gordon Shephard said – “I’m absolutely delighted. Yesterday we got the performance but not result. Today we got the result with one of the best performances this Scotland team has produced for years. We played great hockey for the entire seventy minutes, from back to front. I’m lost for words to describe how good that was.”

“It was a total team effort, everyone played their part in the win. There wasn’t one stand-out player; there were seventeen stand-out players and a reserve goalkeeper who feels every bit part of tonight’s success. That’s what it takes to win at this level and we’ve told the players to enjoy the success. The crowd were fantastic too and the players are very grateful for their support. We now look forward to Korea on Wednesday.”

As Shephard says above, Scotland’s next challenge is against Korea tomorrow at 2pm. You can follow Scotland’s progress in the competition on the tournament website.

The Top of the D would like to thank Nikki Lloyd for taking the time to put this report together. I would also like to wish her and her team luck in the upcoming games.