In anyone’s book, £9,046.57 is a tidy sum of money. It is also the amount of money raised so far by Sam Ward, the Beeston striker as part of the Score4Scan campaign.

Ward started Score4scan after Martin Scanlon, his close friend and former strike partner was diagnosed with Hodgkin’s Lymphoma for the second time. Scanlon, a former England U21 international missed the whole of the 2012/13 season with the illness, but recovered to start this season back in the Bees’ side. However, after a few games, Scanlon received the bad news that he was sick once again.

“After he’d fought back from it the first time and become fully fit it was great seeing him back out there for Beeston. It was a real blow to get the news that the cancer had come back.” Ward said. “I decided to try and do something to help so on the way to training one night I decided to donate £50 for every goal I scored until the end of the season.”

Ward finished as second top scorer in the league, finding the net in 15 of the 18 games Beeston played, scoring 21 times. On top of that he also scored three more this past weekend in the playoffs and still has the Euro Hockey League to come.

“When I started the campaign I’d already scored six times and my record was 15 so I thought nine more goals would be easily affordable. I never thought I’d finish up on over 20 goals, plus the goals in the indoor and the EHL to come it’s been a very expensive year!” 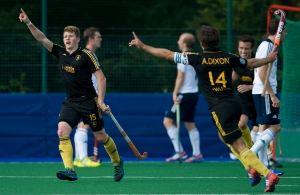 The Score4Scan campaign is another example of what is great about the Hockey Family, with people from all over the country digging deep to ensure they make a contribution to the ever-growing total.

“Oakham School have been absolutely fantastic. Scan works there and they really got behind him, running a load of events to raise money. Nottingham University raised £700 for us at their varsity competition last week, people have donated their winter fuel allowances, other players have given money for goals they’ve scored there’s been a really incredible response.” said the Beeston No15.

Scanlon will go for a stem cell transplant in the next few weeks where he will be getting cells from a donor in an attempt to improve his health and get him back to his best once more. Any treatment is daunting but Ward tells me his friend has drawn great comfort from the response and support he has received:

“Scan’s very upbeat at the moment. The biggest thing has been the donations and support which have really kept him going. It’s made things a lot easier for me as his friend, too, because I’ve been able to show him just how many people care.”

Anyone who has seen Ward play will have seen the determination and refusal to give up that characterises his game. Unsurprisingly, he applies the same attitude to the fundraising for Score4Scan:

“I’d started out aiming for £1000 but quickly realised I needed to increase the target. Now I want it to keep going and see just how much we can raise. The sky’s the limit!”

With the total fast approaching £10,000 how many more pounds will be added on by Ward’s goals and other donations? All I know for certain is we all wish Martin Scanlon the very best and hope to see him back playing for the Bees, soon.

This entry was posted in Features. Bookmark the permalink.