With a total of 511 goals scored this season in the NOW: Pensions Men’s Premier League the race for the top scorer award was hotly contested among the finest strikers the league has to offer. With that in mind, it has been very tough to narrow down the choices you can vote for in The Top of the D’s Team of the Season. However, that’s what I have done, so without further ado, here are the contenders.

The league’s top goal scorer with 22 goals and one half of Surbiton’s dynamic duo up front. Daly and teammate Alan Forsyth contributed 39 of the team’s 70 league goals this season. The former Great Britain star has put his injury woes behind him and had an incredible campaign. He has found the net 17 times from penalty corners and five from open play, including four in 20 minutes against Cannock, a brace in the 3-2 win against Beeston and a stunning hat-trick against Wimbledon in a 4-4 draw. Daly’s goals have been significant in Surbiton qualifying for the Championship Playoffs where their opponents will be desperate not to concede any penalty corners.

Sam Ward, Beeston:
Having lost last season’s top scorer, Simon Egerton to HGC in The Netherlands, Beeston had to find goals, and plenty of them from somewhere. They needn’t have worried, however as Sam Ward rejoined the club in the summer. Ward started the season in blistering form scoring six times in the first three games. Of course his goalscoring exploits were made even more impressive by the #score4scan campaign. Ward vowed to donate to charity every time he scored, something that has cost him a small fortune given he has netted 21 times. Incredibly, he has scored in 15 of the 18 league games this season. A fantastic effort.

Alan Forsyth, Surbiton:
Like his teammate Matt Daly, Forsyth has had a terrific season in front of goal. He has bagged 17 goals in the league, 13 of which have been from open play. His tally would make him the top scorer at every club in the top flight except Beeston, East Grinstead and his own side, Surbiton. Not a bad haul from a player who has scored all kinds of goals from poacher’s efforts to blistering strikes from the top of the D.

It feels like Pearn has been around and scoring goals forever, as year after year the 37-year-old East Grinstead Player-Coach comes up with the goods in the D. An almost telepathic understanding with Ashley Jackson, a bullet like shot and the ability to find the net under extreme pressure have made sure the former Reading man is East Grinstead’s top scorer for the second successive season. Pearn has scored 18 league goals, 16 of which have come from open play. Another scintillating season from the ageless striker.

David Beckett, Cannock:
Cannock found themselves in some bother at the wrong end of the table but Beckett’s form went a long way towards preserving their top flight status. His hat-trick in the 8-3 win over Hampstead and Westminster prompted plenty of ribbing on Twitter from Beckett’s international teammates Dan Fox and George Pinner as you’ll see from the below:

@Danfox450 @davebecks14 he also just text me saying "Ignore that tweet, I'm single handedly keeping this club up and everyone knows it."

Whilst it would be incredible for his teammates to take those tweets as anything other than tongue in cheek, it would be fair to say without his 13 goal haul things could have been very different for Cannock.

Liam Foster, Canterbury:
Foster has scored 16 times this season, a fantastic return for a side that finished in fifth place in the league. Canterbury are very much an all or nothing side, scoring 58 goals (fewer than only East Grinstead, Reading and Surbiton) but conceding 66 goals (the second most in the league.) Foster’s ability to be in the right place at the right time has paid real dividends for his team. They left their charge towards the playoffs too late to be able to catch Surbiton but Foster’s goals will have provided his team with a big positive to take from the season. 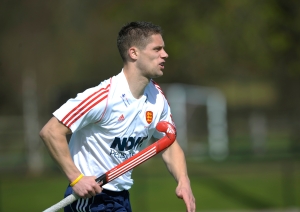 Mark Gleghorne, East Grinstead:
Another player who has seemingly put his injury problems behind him to enjoy a splendid season, Gleghorne is starting to show everyone at Saint Hill just what he can do. He scored goals in the first half of the season, including an important double strike in the 5-3 win over Wimbledon but it is since Christmas that Gleghorne has really started to strut his stuff. After a stint in the Hockey India League where he scored twice for the Mumbai Magicians he seemed to return with a new found confidence, scoring eight of his 11 goals in the second half of the season. On this kind of form, if Mark Pearn doesn’t score against you, Gleghorne probably will.

You can vote for the forwards you would like to see in The Top of the D’s team of the year by using the poll below. You can vote for up to three players. Don’t forget, you can still vote for your favourite goalkeeper, your back four and your midfield trio. Voting closes on Thursday night and results will follow on the Friday before the playoffs begin.