The Top of the D’s Quickfire Questions: Amy Tennant.

Bowdon Hightown’s Amy Tennant is a rising star with an impressive hockey CV to date and a bright future to come. The young goalkeeper has become an integral part of Bowdon’s resolute defence and has stepped up to the big occasion more than once. She has faced and seen off some of the best around on the hockey field, but how would she do when she came up against The Top of the D’s quickfire questions? Find out here!

The Top of the D: What is your biggest achievement?

Amy Tennant: Probably winning the indoor in 2011. Having gone back and lost out in the final this year I realise now what a big achievement it was. Especially as I was so young.

TTOTD: What is your prized possession?

AT: I don’t have a lot of things, to be honest. I bought some really nice headphones the other day and I kind of love them, so maybe those.

TTOTD: Who is your celebrity crush or a celebrity you admire?

TTOTD: Which three people, past or present would you invite to a dinner party?

AT: Beyoncé, again. My Dad, so he can cook, and….. This is hard. Maybe someone rich so I could take their money afterwards?

TTOTD: Who is the best player you’ve ever played with or against?

AT: The best player I’ve played with, has to be Tina Cullen. Without a doubt. Against is Alex Danson. She’s amazing.

TTOTD: What is your hidden talent?

AT: I can’t say I have any. <Pauses> I can eat really fast, if that counts?

TTOTD: If you were on a game show, and needed a phone-a-friend from someone in the hockey world, who would it be?

AT: Fiona Harland from Bowdon.

TTOTD: Who would it not be?

AT: She’ll kill me, but Tina Cullen! 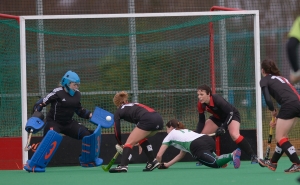 TTOTD: Why do you love hockey?

AT: Because I get to stand around in the freezing cold in goal! Honestly, it’s because I love team sports. You meet some great people and you make some great friends who you get to play with and socialise with.

The Top of the D would like to thank Amy Tennant for her time and good humour in participating in the quickfire questions.