With the Investec Women’s Premier League almost at the halfway stage, it is still only goal difference separating Canterbury in second place with Reading in first, whilst the gap from those two down to seventh is only seven points. At the bottom, Olton and West Warwicks, Sutton Coldfield and University of Birmingham are engaged in their own mini-league with the teams on zero, three and six points respectively. The league is as close as it’s ever been and this week gives us some exciting and crucial contests. 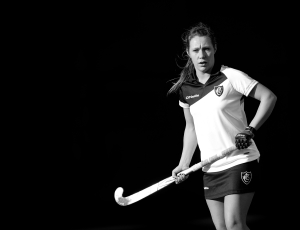 The game that probably deserves top billing pits second against third as Clifton, the only side still yet to lose a league game, travel to second placed Canterbury. Clifton ran out 2-1 winners over Sutton last week to stay in touch with the top two and keep their noses ahead of Surbiton who currently sit in fourth place. Canterbury, who are having an excellent season warmed up for their big game with a 9-0 demolition of bottom side Olton last week. Great Britain star Nikki Kidd pushed her claim to be one of the signings of the season with four goals, three from open play. Player-Coach Jen Wilson told The Top of the D:

“It was a good, solid three points and good to get some goals on the board. To be brutally honest, we could have been a bit more clinical and were disappointed at some of the chances we failed to take, but overall we’re very happy. Nikki Kidd’s settled in very well. As well as her four goals she hit the post three times so could have had more. She’s been excellent for us so far, but everyone played their part at the weekend allowing her to get her name on the score sheet.”

Of course, the Polo Farm side enjoyed a fine season last year and were unlucky to finish second in the league, missing out on top spot by a point. Wilson insists that the disappointment is not something her current squad is too preoccupied by:

“We’ve been focusing on short term goals and so far that has proved to be successful. The players who were here last year will know how close we came and maybe it’s in the back of their minds, but honestly, we’re largely a new group, so perhaps last time’s second place is irrelevant to us. We’re much more focused on now and not the past.” She continued: “We expect a tight, gritty game this week, as it always is against Clifton. They are a well-balanced, well drilled side and they have strength right the way through their team. Having said that, these are the games we play hockey for. It’s always great to test yourself against the best teams.”

As well as matters at the top, Sunday has a huge game at the bottom of the league as University of Birmingham and Sutton Coldfield go head to head. Both were edged out by a single goal last week with Sutton losing 2-1 to Clifton and UoB going down 3-2 at home to Beeston. For Phil Gooderham’s side it represents a chance to put daylight between Sutton and themselves with a potential six point gap on offer should they win. Likewise they can also close the gap with the rest of the league. For Sutton, it is a case of trying to draw themselves level on points with Birmingham as they hope to claw their way out of the relegation play off place and back into survival contention. The stakes could not be higher, even at this stage of the season, a real six-pointer in the Midlands. 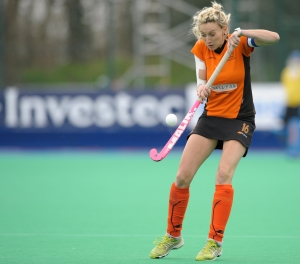 Another Midlands derby will be on show at Leicester Grammar School as Leicester and bottom side Olton line up. Leicester led 2-0 at Reading last week but ended up on the wrong end of a strong comeback, losing 3-2. Coach David Mayer was not too disheartened saying:

“I thought it was an excellent game; I was delighted with our overall level of performance but obviously disappointed not to get something out of the game. We now have a crucial run in to the Christmas break and this week’s game against Olton is the start of that.”

Olton are dead last and yet to pick up a point, conceding 61 goals and scoring just four. Their cause looks tougher and tougher with each passing week and a strong Leicester side will surely show them no mercy.

Beeston are starting to show a bit of form and have quietly gone about settling into the Premier League. They now have three wins in their last five games and in Sophie Robinson they have one of the league’s form goalscorers. They have a stern test ahead of them this week as they welcome Surbiton to Highfields. Surbiton produced an excellent display last week to take a 4-0 win from their game with Bowdon Hightown. Talking of in-form goalscorers, Great Britain’s Georgie Twigg nabbed her fifth of the season in that game. The dynamic midfielder, not famed for her goalscoring exploits is enjoying a fine spell in front of goal and has already bettered her total from 2012/13. What price would you get on her eclipsing her best ever Premier League tally of seven, achieved in 2011/12 with Clifton?

That just leaves the game between fifth-placed Bowdon Hightown and leaders Reading. Although Tin Cullen’s side suffered a setback last week against Surbiton, they are enjoying a fine campaign. A side of up and coming young players blended with some experienced stagers are giving as good as they get. Cullen reflected on last week’s defeat as well as the upcoming clash:

“We had a pretty tough match against Surbiton. They took their chances really well and although our goalkeeper was awesome she couldn’t keep them out. We have another tough game this weekend vs. Reading, but we feel that our youngsters are developing really well all the time. Here’s hoping we can get some points from the game!”

Steve Bayer’s side are in formidable form, unbeaten since the opening day defeat to Canterbury and scoring goals at will with Alex Danson leading the way with 11 league goals so far. Bayer was pleased to put one over on the Pukkas last week as his side came from behind to win 3-2: 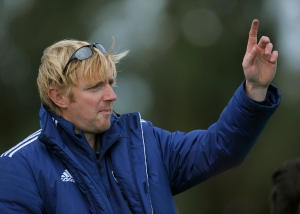 “Leicester was a very tough game. They are our old foes and rivals so we didn’t expect anything less. They’ve lost some players over the summer but they still have some excellent, experienced and streetwise players who know how to cause teams problems. It was a really good test for us and it was pleasing to turn over a 2-0 deficit to get the three points.”   He added: “We’re starting to hit our stride. I’m pleased with how we’re playing. In comparison to previous years we’re further along than we’ve been before; normally we’re down the league looking up at this stage. In terms of our overall goals for the season we’re on course, I’m really happy with the way they girls have performed, our style and tempo is pretty much where it was at the end of last season, so it’s an exciting time for us.” Despite his team’s good form, Bayer knows they cannot take Hightown lightly and is approaching the game with the appropriate caution:

“Bowdon are a well organised side, they have some exciting young players but also a lot of experience. Any side with Tina Cullen in it will give you a challenge, that’s for sure. We will approach the game with a lot of respect for them, but we’re confident of getting the result. We have two very big games going into the break, this week and against Canterbury next week.”

As you can see, there are important clashes all through the division, with teams still snapping at the heels of those above them there is still plenty to play for. A good run of results could easily take a team into the playoff picture or away from the foot of the table, so every point is crucial. As always you can find out the results of all the games on the England Hockey Website.