Reading moved to the top of the league last weekend with an eye catching win over Surbiton. Steve Bayer’s side ran out 2-1 winners against their fellow title hopefuls to take full advantage of an unexpected slip by Canterbury away at Beeston.

Goals from Alex Danson, her seventh of the season and the winner from Becky Halle were enough despite a late reply from Chloe Strong. Reading Coach Bayer told The Top of the D:

“On paper it was a tough match as they’ve recruited well over the summer. I was happy with our performance. We were solid without the ball and played some fast, attacking hockey so overall we’re really pleased.” He continued:  “Games like this at this stage of the season are a good benchmark for us. I’m not sure of their objectives so it’s hard to know what they would have thought but we were ready for a hard game, which is what we got, and I’m really pleased with how we coped with their threat.”

The coach also paid tribute to Becky Halle, scorer of what turned out to be the winner:

“She’s worked really hard this season. She’s a good young talent and it’s great for her confidence to see her scoring important goals. It’s also fantastic that we’re getting contributions from all of the squad and not just the same names week in week out.”

Reading continue their campaign with a home game against Sutton Coldfield this Saturday. Reading’s coach is typically calm about the upcoming contest:

“We approach every game with the same level of respect for our opponents. Sutton have some experienced players and were a well-structured side last season. I fully expect them to be hard to break down and we will approach this like we would any other game.”

Sutton come into the game off the back of their first league win of the season against bottom of the table Olton. A hat-trick for former Olton player Emma McCabe did the damage in a 6-1 win. The Pinks remain in touch at the bottom of the table, level with University of Birmingham and three points behind Beeston. They will know they have their work cut out against a Reading side in great form. 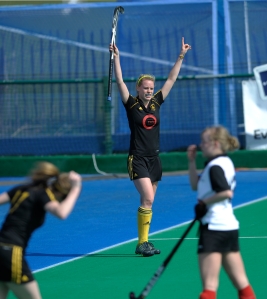 Beeston, who produced arguably the standout result of the week (inflicting a first loss on Canterbury,) will hope to build some momentum to add to their two wins with a trip to bottom placed Olton and West Warwicks. Olton’s miserable run continued, as mentioned, when they lost 6-1 to local rivals Sutton Coldfield at the weekend. Their record now stands at five games, five losses and 41 goals conceded. Things look bleak for Olton and Beeston will aim to extend that run and move themselves away from the foot of the table.

Clifton, now in third place, made some ground on Canterbury with a hard-earned 2-2 draw at home to Leicester. Dutch star Els Mansell netted twice to take her tally to four in five games, but it was not enough to see off the Pukkas who hit back through Kerry Whitehead and Lily Elliott. Clifton have a tough assignment this week too, as they go up against Bowdon Hightown. Tina Cullen’s side were humbled 4-0 last week by University of Birmingham but remain firmly in the hunt for a playoff place. Cullen was brutally honest about her team’s display telling TTOTD:

“We were outplayed by Birmingham. They took their chances really well. We were very disappointed that we didn’t really perform to our potential but we will go out positively next Saturday as we know we have a tough home game vs. Clifton who have started the season really well.”

That display against Cullen’s Bowdon was University of Birmingham’s first win. Their Coach Phil Gooderham was pleased to see his team’s hard work finally paying off:

“We’ve been playing well all season and we felt that if we believed and stuck to what we do well the results would come sooner rather than later. If you stick to your plans and play to your strengths you always have a chance. It also helped that we were clinical in front of goal for the first time this season, so we’re really pleased to get the win.” He added: “The goals were scored by four different players which sums up the team display we put in. It sounds a little cheesy but everyone’s doing their bit that’s great for us as a group.

Birmingham’s next game is against Surbiton, who will doubtless be keen to bounce back from last week’s loss to Reading. Gooderham expects a hard game, but also highlighted his and his team’s knowledge of their opponents due to the large ex-UoB contingent in the Surbiton ranks:

“Surbiton are a top side. They have plenty of players we know; in fact it’s felt like we’re their nursery club these past few years! We know their players very well so know it’ll be a very competitive game, especially as they beat us last year. However we are a stronger side this year and with the confidence we have from last week we’ll certainly be going there aiming to get a result.”

That just leaves the mouth-watering clash between Leicester and Canterbury. Leicester currently sit sixth in the league after two wins and two draws in their opening five games. They are within touching distance of the playoff places and will be keen to take advantage of a Canterbury side who could be reeling from the shock of their first defeat last week.

Coach David Mayer said of his side’s draw with Clifton:

“It was a tough game away from home against a very well organised side in good form; on reflection our forward play was exciting and dangerous but we were a little shaky defensively; we were pleased with a point gained.” Looking ahead Mayer emphasised the importance of getting a foothold in the game against Canterbury:

“Canterbury is another traditionally hard game for us. They are a side who have had an excellent start so we will need to start well and try to build ourselves into this game.”

Canterbury Player-Coach Jen Wilson stressed there is no need to panic after dropping their first points of the season, despite her disappointment at her team’s first half display:

“I felt we let ourselves down in the first half. We gave them too much space and let them settle into the game. In fairness to them they took full advantage of that and got themselves a lead. We had a much better second half and created plenty of chances. Their goalkeeper was outstanding; probably man of the match, their two-goal cushion was enough for them to hang on to, which they did.”  She continued: “We looked like we were making up for some of our errors during the second half last week and we’ve worked on them in training so we’re very confident we can bounce back. We’re always striving to get better and to play at a higher level, so whilst I’m happy with our start I know we can do more.” Like Mayer, Wilson is looking forward to a typically competitive game this weekend:

“The girls are keen to put right what we did wrong last weekend so they’re raring to go. Leicester is always a tough place to go. We have a long history of battles with them and this week is going to be no different. They’re a high quality side and we fully expect a very hard game.”

Undoubtedly the league is reaching a crucial stage with a quarter of the games gone, some teams are starting to look over their shoulders whilst others are keen to kick on and mount a serious challenge for the play offs.

As always, you can see all the results on the England Hockey website.

This entry was posted in Investec Women's League. Bookmark the permalink.