Posted on October 3, 2013 by thetopofthed

Another big week of NOW: Pensions Men’s Premier League hockey is almost upon us and like last week, there is a huge clash between two unbeaten sides: Beeston play host to Surbiton in a repeat of last season’s Championship Playoffs Final.

The Bees have had probably the toughest start to the season imaginable. They have faced Wimbledon, Reading, East Grinstead and now Surbiton, arguably four of the strongest teams in the league in their opening fixtures. Coach Matt Taylor resisted the temptation for any David Moyes-style conspiracy theories and told The Top of the D:

“When the fixtures came out in the summer I looked at the first four and thought they were all potential title contenders. We’ve made sure our pre-season was spot on and that we were well prepared and so far we’re delighted with the start we’ve made.”

Taylor’s side turned in an impressive display this past week to beat East Grinstead 3-1. Striker Sam Ward continued his excellent form with two goals, taking his tally for the season to six and drawing praise from his captain, Adam Dixon:

“We lost Simon Egerton this year and he’s a proven goalscorer so it was obviously a big blow to see him leave. We’ve had Wardy at the club before so we know what he’s capable of. When he showed an interest in coming back to Beeston we bit his hand off. As you saw today he’s slotted straight in, really hit the ground running and picked up where Egerton left off.”

Beeston’s opponents, Surbiton dropped their first points of the season last weekend against Wimbledon, but will still provide a stern test for the Taylor’s side. The Sugden Road outfit have scored ten times this season already and conceded just four, however their coach, Todd Williams still feels they have much room for improvement:

“As expected, it was a tough battle against Wimbledon. A 2-2 draw was probably a fair result given their good first half and our response in the second. We are still working to be more consistent for longer and in that sense our second half was pleasing, having been 2-0 down. We know that against Beeston, the punishment for any poor spells will be much more severe, however.”

Although both sides will have one eye on their upcoming European Hockey League campaigns, expect no quarter to be asked or given at Highfields.

East Grinstead surrendered their winning start to Beeston this past weekend and their captain, Glenn Kirkham could not hide his disappointment, telling TTOTD:

“Not the result of the performance we wanted really. We looked like we felt a bit sorry for ourselves and we weren’t putting the right kind of effort in. After the Canterbury result we had a lot of confidence but I think perhaps we were taken a little by surprise at how good Beeston were. That being said, we didn’t put any sort of performance together so we didn’t deserve anything from the game.”

“For whatever reason we didn’t play to our potential today. If we had played to our best and played the system we were meant to and it hadn’t worked, I’d be concerned. It is still very early in the season so nothing to worry about just yet.”

Hampstead and Westminster have recovered from their opening day defeat to Surbiton and won their last two games. Traditionally, they cause the Sussex side some problems as Mark Pearn acknowledged:

“Hampstead has always been a difficult place to go to and win and I can’t remember the last time I had an easy victory there. We had a hard fought 1-1 draw away last year and we are expecting more of the same on the weekend.”

Another intriguing game will be contested by Wimbledon and Reading. The Wombles picked up their first win in week two of the season and followed that up with an impressive point against Surbiton this past week. Reading have assembled a strong squad over the summer and come into this week’s game off the back of a fine 5-2 win over Cannock. England star and summer signing Dan Shingles netted twice.

Sheffield Hallam are still searching for their first win in the top flight and travel to Loughborough Students this coming Saturday. Both sides will be boosted by the return of some of their Under 21 internationals in what could be a crucial game, even at this stage of the season. The Students will hope to give themselves some breathing space by notching their second win of the campaign, whilst Hallam will be desperate to register their first points. 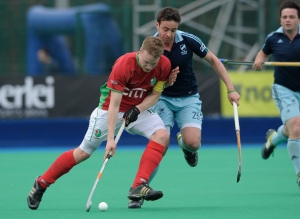 That just leaves the clash between Cannock and Canterbury. The Nockers have yet to pick up a point and have conceded ten goals in their opening three games. Canterbury endured a nightmare start to the season, including a 9-1 humbling at the hands of East Grinstead, but this past week got their season off and running with a 4-1 win over Loughborough. Captain Michael Farrer was pleased with his side’s improvement:

“After a heavy defeat it was always going to be important to get a result. We identified some areas that we thought we could improve on from the EG game and the guys delivered so we will be hoping for a similar improvement again this week.” He added: “Cannock are always tough opponents and we’ll be expecting a real battle on Sunday. They’re one of the league’s hardest working units and so we’ll need to put together 70 minutes of good hockey in order to take something from the game.”

As has been the case every week so far this season, the fixtures have thrown up some intriguing contests which, despite the early stage of the campaign, could have great significance at both ends of the table come the end of the season.

Columnist for The Hockey Paper and the man behind The Top of the D. Writer, podcaster, goalkeeper and BBC Sport man. Used to work for Great Britain Hockey and have covered the sport at every major tournament.
View all posts by thetopofthed →
This entry was posted in NOW: Pensions Men's League. Bookmark the permalink.