Posted on September 26, 2013 by thetopofthed

As is the case in the Investec Women’s Premier League, something has to give in the NOW: Pensions Men’s Premier League this weekend, as East Grinstead and Beeston, both with two wins from two games go head to head at Saint Hill this Saturday.

The Bees, the reigning champions, edged out a strong Reading side last week, winning 4-3. Beeston’s goals included another brace for Sam Ward, taking his tally to four this season and the winner from Martin Scanlon, on his return to action after recovering from cancer. Beeston coach Matt Taylor recognises the threat their opponents pose, but is also able to welcome back a familiar face to his starting XI:
“East Grinstead are a quality outfit and as you’d expect have got off to a flyer.  It will be a tough challenge but we’ve had some great results down there in recent years so we’ll hope for the same again this year. We welcome back the club captain and GB International Adam Dixon for his first game of the 2013-14 season, so we’re nearly there in terms of picking our strongest 16.” 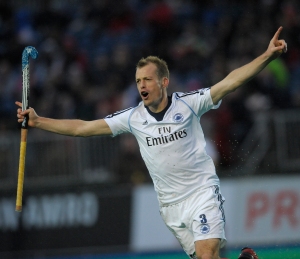 East Grinstead flexed their muscles last weekend with a stunning 9-1 win away at Canterbury. England stars Ashley Jackson and David Condon each bagged a brace, as did Player-Coach Mark Pearn. The former Reading star told The Top of the D:
“We’re delighted with the score line. Last week we created just as many chances against Sheffield but we weren’t as clinical. We did a lot of work this week with the forwards and ensuring the midfield got closer to them and that showed as we had numbers in the circle and our shooting was ten times better, we scored some fantastic team goals.”
Looking ahead, Pearn acknowledged the quality of their next opponents, but signalled his side’s intent:
“They had a great season last season and have picked up where they left off. When you come up against the top teams it’s exciting so we’re looking forward to it. We’re in good form, but so are they. We’re keen to keep on improving and hopefully reach our best very soon. If we do that we can hopefully get a win and keep our momentum.”

Another side with a 100% record is Surbiton. Todd Williams’ side have recorded good wins over Hampstead and Westminster and Sheffield Hallam, scoring eight times and conceding just twice in the process. They go up against a newly-promoted side for the second week in a row as they play host to Wimbledon. Wimbledon notched their first win in the top flight last week with goals from Johnny Kinder and James Osborn seeing off Cannock. Surbiton Coach Williams accepts his team have room for improvement, despite their excellent results:
“We were a little inconsistent last weekend, but to be fair to Sheffield they played well and went from defending in long spells to creating good moments of their own. They deserve a lot of credit for a great first home game in the league in front of a good crowd on their new surface.” He added: “So far we’ve played well for about one half of hockey from four. We’ll need to step up significantly if we want to do well against Wimbledon on Saturday night.”

Sheffield Hallam have earned praise for their opening two displays in the Premier League, but no points as yet. They host a Hampstead and Westminster side this week that will be buoyed by a 4-1 home win over Loughborough Students last weekend. The win, their first of the season included two goals from last season’s top scorer Will Naylor. Hallam will by no means be panicking just yet, but will equally be keen to follow Wimbledon’s example and get a win on the board as soon as possible.

Reading, winners in week one were of course edged out by Beeston in last week’s thriller. They welcome Cannock to Sonning Lane with The Nockers one of three teams still yet to pick up a point. After the departures of Dan Coultas and David Harris over the summer, it seems the goals may be hard to come by this season. Finding the net this weekend against England goalkeeper James Bailey and his defence will certainly not be easy.

That just leaves the visit of Loughborough Students to Polo Farm where they will play Canterbury. Loughborough chalked up a win in week one, defeating Cannock 3-1, but were brought back down to earth by Hampstead and Westminster last week. The game has an odd symmetry with last season as Canterbury come into the fixture, like last year, off the back of a big defeat. Captain Michael Farrer told The Top of the D:

“We went away against Beeston last year and lost heavily but we bounced back to win the following week against Loughborough. That started a great run of results for us. I’ve said to the guys that we need to have a look at ourselves and up our effort levels. There’s still a long way to go in the season so we can hopefully repeat what we did last year and put together another spell of good form. I’m still confident going into this game, even after the result against EG.”

With the season still starting to take shape, each one of the games takes on its own significance. In one of the most open seasons for a long time, it is still anyone’s guess who will seize the initiative and build that all important run of results to propel them towards the top of the league.

You can find out all the results on the England Hockey website.

This entry was posted in NOW: Pensions Men's League. Bookmark the permalink.