With the league phase now behind us it is time once again for the top four indoor teams in the men’s domestic game to take to the floor at Wembley Arena to battle it out in the men’s semi-finals and final to see who will take home the coveted Maxifuel Supersixes title.

The quality of hockey on offer cannot be questioned for England Hockey’s Big Night In: Beeston, currently top of the outdoor league and still in the Euro Hockey League face off against Reading, themselves still in the EHL and reigning England Hockey League Champions. The other semi-final pits reigning indoor champions East Grinstead against Canterbury, currently second in the outdoor league who qualified for the semi-finals top of the indoor standings. It is fair to say these games promise to be quite the spectacle. The Top of the D looks at the teams involved.

Canterbury are having an excellent season. Currently second in the Premier League outdoors they qualified for the semi-finals of this competition by virtue of finishing first in the league section of the SuperSixes.

They lost their opening game in spectacular fashion by 11-2 to semi-final opponents East Grinstead, but recovered brilliantly, only dropping further points in a 5-5 draw with other semi-finalists, Reading.

Canterbury’s success this season has been built on pace and skill in attack. Their positive style is well suited to the indoor game, with a “we’ll score more than you” attitude standing them in good stead. They will cause East Grinstead problems, but will have to shore things up at the back if they are to overcome the Sussex side.

Player coach Kwan Browne is a splendid player in indoor hockey. Pace, skill, technique, power and a blistering drag flick, Browne has it all in his locker and has been a key part of his team’s success. As a former East Grinstead player he would love to put one over his old side and take the Polo Farm outfit to the finals.

Devohn Teixeira, a veteran of two Indoor World Cups with Canada has undoubted pedigree in the indoor form and has been singled out by Canterbury Captain Tom Richford as one of their stand out performers in the league phase. If East Grinstead make special provisions for Browne, Teixeira’s role will become even more crucial.

Ben Alberry, another former East Grinstead player is the fox in the box who knows where the goal is. With goals being traded every minute, his predatory instinct in front of goal could prove vital to Canterbury’s chances.

East Grinstead qualified yet again for the semi-finals, finishing in the fourth and final 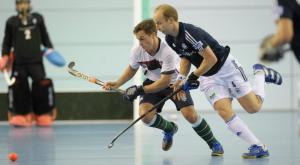 qualification spot. As mentioned above, they defeated their opponents 11-2 in their opening game. They will be anticipating a sterner test at Wembley this weekend. Grinstead’s campaign has been built on a strong defence, they have conceded the fewest goals in the tournament so far (30) as well as scoring the second most with 49. They have yet to lose in the tournament, but dropped points with draws against Reading, Beeston, Doncaster and Bowdon. They may not have run away with the league but their big game experience and their winning mentality will undoubtedly come to the fore when it matters the most.

English fans may not be familiar with Filip Neusser. The giant Czech international is an outstanding goalkeeper with a wealth of international caps under his belt. A blend of agility and presence in his D, Neusser is something of an indoor specialist and is definitely a daunting man to beat.

Adamson Harper has not featured outdoors this season but has returned for the indoor campaign. Harper is a reliable and consistent defender who is rarely flustered and goes about his business quietly and effectively.

I hadn’t seen much of Joe Naughlty before this season, but having watched him a number of times now, I have been impressed by his close control and his technical ability on the ball. His hand speed allied with his speed of thought has made him a thorn in the side of many defences. Those skills translate to the indoor game very nicely indeed.

Finally, Glenn Kirkham, the East Grinstead captain will bring his vast experience and his consistency to the table. Simply put, I have never seen Kirkham have a bad game, and with the big crowd and the big occasion weighing heavily on less experienced players, a man like Kirkham is more important than he gets credit for.

Reigning outdoor champions Reading qualified for the semi-finals in second place, behind Canterbury. They have an impressive record and are yet to suffer defeat in the competition, winning five times and drawing three times against East Grinstead, Canterbury and semi-final opponents, Beeston.

Reading have the equal best defensive record in the league, conceding just 30 goals. Their strong defensive work means their flair players are given licence to hit teams on the break and cause havoc, which thus far has proved a more than adequate tactic. Reading have been there or thereabouts in this competition many times recently, and roared on by their fanatical fans, the RHC Blue Army, they have every chance of going all the way this time out.

Having lost goalkeeper Nick Brothers to retirement, James Bailey stepped into the breach. A summer signing from Bath Buccaneers, Bailey has been superb. His quick reflexes and speed off his line have proved to be valuable assets indoor and out. Expect Bailey to play a key role as Reading aim to continue their defensive solidarity.

Darren Cheesman is one of the most naturally gifted players in the British game. Cheesman’s ability to beat a man at pace and his use of the ball is up there with the very best. With Reading allowing him the freedom to play his natural game, Beeston will have their work cut out stopping him.

If that wasn’t enough to keep them occupied, there is also Simon Mantell to contend with. Mantell was unfortunate to miss out on the London Olympics with a broken foot, but has returned to bring his flair and eye for goal back to the Sonning Lane outfit. Mantell has played in big games, and been pivotal in them. His ability means he could easily be a match winner.

Last season’s beaten finalists will be hoping to go one better this time out. Beeston have been the form side in domestic hockey this season, racing to the top of the league outdoors and scoring goals for fun. Indoors they carried on their goal scoring spree by

scoring the most goals in the competition so far (54) but they have also conceded their fair share. Beeston lost to Canterbury and drew with Reading and East Grinstead, showing there is little to choose between the four semi-finalists. Like Canterbury they are very much an all out attack side. They have plenty of firepower and plenty of players capable of turning a game in their favour.

Simon Egerton has been in terrific goal scoring form this season and has earned himself a place in the international set up as reward for his efforts. Egerton will be handful for any defence if he is at his best on Sunday.

Ben Arnold, another who has broken into the international set up, has flourished into a dangerous attacking player. The Beeston No.10 is deceptively strong and has an abundance of technical skills, as well as the ability to beat a man. He is a key part of their flowing attacking play and will be set to shine on Sunday.

Harry Martin makes up yet another of Beeston’s excellent attacking options. The Great Britain star had a splendid Olympic Games in the summer and having made the move to the Bees this season has never looked back. Martin possesses some outrageous skills and for a young man, a lot of big game experience.

There really is very little to choose between the sides contesting the semi-finals. So predicting a winner is a very difficult task indeed. What we do know is all these sides will serve up some exciting attacking hockey and I am sure there will be plenty of goals.

Who do you think will win? Let me know using the poll below. Or tweet me at @TheTopoftheD.

Columnist for The Hockey Paper and the man behind The Top of the D. Writer, podcaster, goalkeeper and BBC Sport man. Used to work for Great Britain Hockey and have covered the sport at every major tournament.
View all posts by thetopofthed →
This entry was posted in Domestic Hockey, Features. Bookmark the permalink.