Euro Hockey League Round 1.2: A look back.

You’d think after three days solid of nothing but hockey, The Top of the D would be fed up with Round 1.2 of the Euro Hockey League. You’d be wrong. Having gone back to the harsh reality of my real job this morning; I have found my thoughts drifting to the events of the weekend with a sort of wistful nostalgia. Of course, you can read match reports from all the games by clicking on the Euro Hockey League link at the top of the page. However, here are a few personal highlights:

Favourite game of the weekend:

This comes down to two games:

The first is Sunday’s clash between HC Bloemendaal and Lisnagarvey HC. Having rescued a draw against Lille the day before, the Irish side knew a draw or a slimmer margin of defeat against the Dutch powerhouses would seal their place in the next round. What followed was an incredible rearguard action with inspired displays from the whole team, but in particular goalkeeper John Tormey, captain Jonathan Bell and Brian Waring at the back.

It took Bloemendaal until 58 minutes to finally break the Men in Blue’s resistance, eventually scoring twice more in the last 10 minutes to earn a 3-0 win. It is not often Bloemendaal look frustrated but there were certainly moments in this match. It seems silly to be excited by a loss, but the effort and application on display was hard not to admire. If there is such a thing as a glorious defeat, this was it. 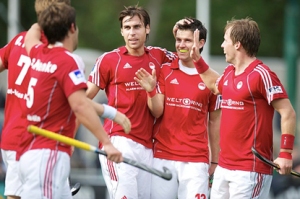 The other game was Rot-Weiss Köln vs. AHTC Wien. It is probably cruel of me to pick this game, but seeing the talented German side in brutal, ruthless form like they were in this match is a joy to behold. Credit to Wien who limited their opposition to “just” three goals in the second half and even scored one themselves. However seeing Christopher Zeller, Jan-Marco Montag, Marco Miltkau et al running riot is quite a treat, whoever you are. I’m tempted to talk about ruthless German efficiency but instead I’ll just write the score: 12-1.

Obviously at this level there are lots of wonderful players on display. The players I have highlighted are players I particularly enjoyed watching. They might not be the best performers of the weekend, or even players you noticed, but there you go!

As I’ve alluded to above, what I love about Zeller is he is a ruthless, no-sentiment goal machine. He always looks totally emotionless on the pitch and it doesn’t matter what the score is or who they are playing, Zeller wants more goals. If he’s not scoring them, he’s creating them. He showed that streak against AHTC Wien and seemed quite irritated they didn’t score more. 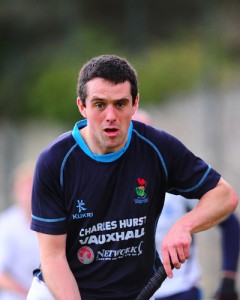 The former Ireland international may be a little long in the tooth and has left his international days behind him but the Garvey No10 was hugely impressive this weekend. He was at the heart of all their best attacking work in the 3-3 draw against Lille showing composure, elegance and no little skill on the ball. He showed the other side of his game against Bloemendaal, mucking in and defending with his life, as the rest of his side did. A very impressive effort.

In sheer statistical terms, Vitko had a nightmare weekend. Two games, two defeats, nine goals conceded for the Brest goalkeeper. However, as his side were always likely to be the whipping boys of the group one must put his efforts into context. Vitko made a string of impressive, athletic and sometimes unbelievable saves during both games. They may have shipped nine, but it could have been a lot more. A brave and heroic weekend from the Brest captain.

The phrase “put in a hell of a shift” could easily have been coined with Newman in mind. 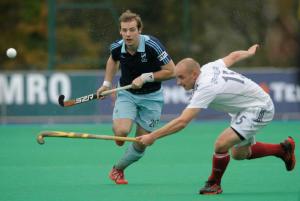 He seemed to be everywhere: Defending in front of the full back, bursting forward and getting the ball to the baseline, even at times sliding in to try and finish off a move with a goal. In the crucial game against St Germain, hard work and not finesse was always going to win the day. With Newman in the side, Reading were already in with a great chance in that battle.

The quiet unassuming way the Dragons’ No3 went about his business was great to see. A defender that you don’t notice is usually one who is doing his job very efficiently. Van Doren defended calmly and intelligently and got forward in support on a number of occasions. His touch was impeccable and his use of the ball was excellent and rarely wasteful.

Obviously all the fans played their part and undoubtedly for the players, seeing a familiar face or two in the crowd means a lot. However, over the weekend, three groups stood out.

A small pocket of very noisy Belgians who did not stop singing from first whistle to last. The leader, a young lad in a Wat Ducks shirt with a No1 on the back must have a loyalty discount with a company producing throat lozenges. He led the chants with passion and no little noise, sometimes shouting so loud it looked like he was about to burst. His throat must feel like he swallowed a cactus this morning.  The rest of the group did their side proud, too. Small in number, big in support!

Their team did them proud on the pitch, and I was lucky enough to sit behind the Garvey fans during the Bloemendaal game. They were a good-humoured, friendly bunch with some very witty songs. Highlights included an homage to the Pussycat Dolls (Don’t you wish your club was Lis-na-garvey? DON’TCHA?!), The Jonny Bell song (I want curly hair too) and of course my personal favourite “Allez Les Bleus” which during their first game against a French side, confused the hell out of me! 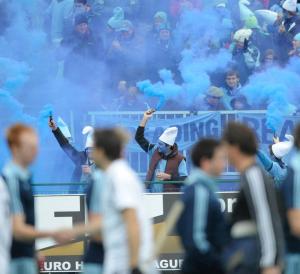 I couldn’t go without mentioning these guys. They arrived in a puff of Blue Smoke, dressed as Smurfs, with drums, rattles and a lot of passion for their side, their support helped their boys to get home against St Germain in their crucial game, too.

I’m told the pre-match, post-match and key moment music was the choice of East Grinstead Manager, Matt Jones. As well as some upbeat dance songs to get the players and the crowds pumped up, there were also some old favourites too. The Countdown theme after the award of a penalty corner was probably lost on our European guests but made me smile. Oh and this song whilst waiting for the video umpires provided great entertainment. Although I hope no one is suggesting the officials were Muppets. That would be wrong.

With the pressure off, Rot-Weiss were able to try a few things out. Menke’s goal was a penalty corner. Jan-Marco Montag shaped to shoot, instead producing an outrageous piece of skill, bringing the ball behind his own back and slipping it left to Menke who sent an unstoppable flick into the net. When they come off, there is nothing better.

With the game still in the balance due to Simon Mantell’s missed penalty in this high-stakes contest, Carson latched onto a cut back from the baseline and in a cauldron of noise calmly took his time and slotted the ball past Martin Zylbermann. It is not so much the mechanics of the goal itself, but more the composure the young man showed. It would have been easy for him to panic and blaze it over the bar, but the former Exeter student wasn’t having that.

Brogdon seems to have settled well in Belgium and has fitted into WatDucks’ style of play seamlessly. With the ball being fired in from wide right, the Englishman had a lot of ground to cover. He not only did that, but also produced a wonderful tip in, sliding in near the penalty spot to guide the ball into the corner giving Richard Potton no chance.

Piper is not a household name, but he is a popular member of the EG squad due to his work rate and willing. His first goal against Brest showed many of his best attributes in quick succession: First, he worked hard to get up and support the attack. As Mark Pearn fired the ball in, he showed a good touch to bring it under control and move it to the side in one motion; he showed good strength to hold off the defender and then calmly slotted the ball home. Touch, movement, strength, finish. Lovely.

This piece would not be complete without mentioning the job done by all those who worked to make the weekend happen. The volunteers and staff were cheerful and helpful throughout, despite the arctic conditions. Any help or advice you needed as a journalist was immediately catered for and the whole event ran like clockwork. It is no mean feat to pull off an event like this. EG did so and deserve a lot of credit. Let’s hope the EHL comes to England again.

Columnist for The Hockey Paper and the man behind The Top of the D. Writer, podcaster, goalkeeper and BBC Sport man. Used to work for Great Britain Hockey and have covered the sport at every major tournament.
View all posts by thetopofthed →
This entry was posted in Euro Hockey League. Bookmark the permalink.

2 Responses to Euro Hockey League Round 1.2: A look back.