Posted on August 7, 2012 by thetopofthed

The Netherlands secured top spot in the pool and set up a clash with New Zealand in the semi-final with an impressive 2-1 win over hosts Great Britain.

With both of the teams well supported in the packed Riverbank Arena it was all set for a classic encounter.

The opening exchanges were fairly evenly poised as both sides tried to gain the ascendancy. Naomi Van As was influential, making a series of elegant and dangerous runs, asking questions of the Great Britain defence.

Kim Lammers deflected Kitty van Male’s cross just wide, before the Oranje won their first penalty corner. The ball seemed to be mis-trapped and the routine came to nothing, before Britain cleared.

With Van As dominating the midfield, Great Britain were pegged back and forced to hit on the break. Alex Danson managed to force Great Britain’s first penalty corner on 29 minutes as her shot on the turn hit Sophie Polkamp’s foot. Up stepped Crista Cullen who scored with a low drag flick giving Joyce Sombroek no chance. It was slightly against the run of play, but there was no doubting the quality of the Leicester star’s finish.

The visitors won a penalty corner almost immediately. This time captain Maartje Paumen flicked for goal, only to be kept out by an excellent save from Beth Storry. That save preserved Great Britain’s slender lead as the sides went in for half time.

After 3 minutes of the second half Van Male broke into the Great Britain half carrying the ball a long way, she slid a pass through to Kim Lammers; however Storry was out quickly to make another good save.

Storry couldn’t do it again as the Oranje forced another penalty corner. This time, Paumen passed to the back post where Naomi Van As made no mistake, slapping home to make the scores 1-1. 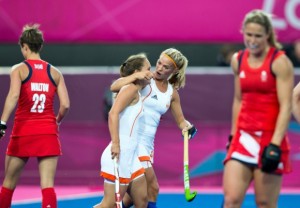 They extended their lead in the 52nd minute. Maartje Goderie did well inside the D to engineer a chance; the ball eventually fell to van Male who prodded home from close range.

Great Britain tried desperately to get back to level terms, Laura Bartlett was having another excellent game, causing the Dutch problems with her direct running and willingness to put the defence under pressure, but support was in short supply.

Ellen Hoog almost made it 3-1 as she latched onto a sweeping move forward only to find Beth Storry in her way once again with another splendid save.

The Netherlands ran the clock down in the dying moments to take the win and ensure they finish unbeaten in the pool.

For Great Britain it was a bitter-sweet evening. They had already qualified for the semi finals after Japan’s shock win over China earlier on in the day. However, this was their second loss in as many games, meaning they will need to regain their previous momentum as they line up against Argentina. It was not Great Britain’s most polished performance, but with a talented group of players and a partisan home crowd behind them, they will surely perform better as they seek to avenge their Champions Trophy loss to Las Leonas.

For the Dutch it was business as usual. With Van As in imperious form, and Van Male and Lammers a constant threat, they will feel confident of progressing to the gold medal match.

The tournament is hotting up, with Great Britain vs. Argentina at 8pm on Wednesday, and New Zealand vs. The Netherlands at 330 the same day.

This entry was posted in London 2012 Women. Bookmark the permalink.