Posted on August 1, 2012 by thetopofthed 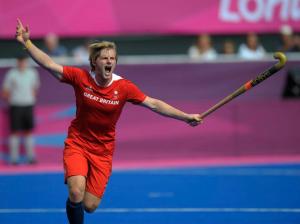 A late equaliser from Ashley Jackson spared Great Britain’s blushes as they stuttered to a hard-fought draw against a resolute and well-drilled South Africa side.

After South Africa’s catastrophic opening game against Australia, a 6-0 defeat, many of the crowd arrived expecting a big score for the home side; it did not pan out that way.

Great Britain started the brighter of the two sides, a flowing move early on culminated in Barry Middleton breaking through with just Rassie Pieterse to beat. With Jonty Clarke steaming up in support, the Great Britain captain instead opted to lift the ball past the goalkeeper, but his effort drifted wide of the far post.

At the other end, Lloyd Norris-Jones, a former Canterbury player, was working hard to cause the home defence problems. His efforts saw him break free down the left, but a lack of support meant his reverse stick cross found no one and the danger was averted.

On 14 minutes, Great Britain won their first penalty corner. Iain Mackay broke forward strongly, before Jackson collected the loose ball. His shot was saved by Pieterse but popped up dangerously off the keeper. Having been off the field for Great Britain’s penalty corners against Argentina, this was the world’s first look at Jackson from a set piece in the tournament, and the East Grinstead man didn’t disappoint: His vicious drag flick flew into the roof of the net giving the goalkeeper no chance at all.

South Africa tried to hit back, and again Norris-Jones was the architect of their chance. He left Iain Lewers and Ben Hawes trailing in his wake as he cut into the D but his reverse stick shot was sliced agonisingly wide.

As the half wore on, the crowd became more edgy. South Africa were operating with one man high up the pitch and looking to throw aerials or long passes into the wide areas for the forward to chase. From a defensive standpoint, they were pressing GB and not allowing them time on the ball. Often 3 or 4 players were around the ball, ensuring the options to attack were very limited for the home side.

Great Britain forced their second penalty corner of the match after a foul by Rhett Halkett on Rob Moore in the 25. It was Jackson who stepped up again, but this time Pieterse made a wonderful save, getting his glove to the ball to send it over the top of the crossbar to safety.

As the sides went in for half time, Great Britain led, and probably had the better of the half, the tension, however was obvious.

South Africa started the second half where they left off the first. Again they denied Great Britain time and space on the ball, and despite the efforts of Matt Daly, who produced a lovely flick to get Middleton in behind the defence, and one effort on goal from on his knees, saved by Pieterse, the home side were looking out of ideas.

Ashley Jackson tried to launch a counterattack by running out of defence, but got caught in possession. Norris-Jones was the thorn in the defence’s side again, but his shot was comfortable enough for James Fair.

With South Africa growing in confidence, Thornton McDade wasted a superb chance with a tame reverse stick shot, after good approach play from Justin Reid-Ross. The visitors were trying everything to get a chance at goal, using their referral, unsuccessfully, to try and win a penalty corner for a foot by Iain Lewers.

On 60 minutes, they got their wish, winning their first penalty corner of the game. Austin Smith, the former Reading star and South African captain flicked low into the corner past James Fair and James Tindall on the line. Four minutes later, they took the lead. The ball broke to Jonathan Robinson in the D, who composed himself before ripping a low shot right into the corner past the outstretched foot of Fair. 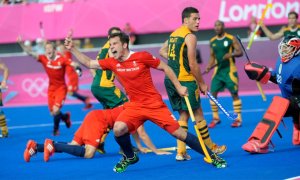 With time running out, Great Britain suddenly seemed to find some urgency. Jackson saw a deflection go just wide as the hosts steeled themselves for a point-rescuing effort. With two minutes to go, a fierce cross by Richard Smith took a deflection in the D and nestled in the corner of the South African goal. The umpire gave a goal, but then decided to refer to the video to make sure. After what seemed an age, the goal was given, as Jackson was deemed to have touched the ball before it went in off the defender’s foot.

With a point seemingly rescued, Great Britain won a penalty corner. The clock had run down, so this was to be the last play of the match. As Jackson stepped up to try and win the match, there was a collective intake of breath, but Pieterse stood firm and made another fine save to secure a draw for his side in the most dramatic of fashion.

In truth, the draw was not a disaster for Great Britain. It leaves them second in the pool behind the dominant and daunting Australians, who followed up their thrashing of South Africa with a 5-0 hiding of Spain. For South Africa, it was a much improved performance. They came in with a game plan, which they stuck to and almost pulled off a huge shock. Credit must go to Norris-Jones, who worked tirelessly up front and Pieterse whose saves proved vital in the end. Britain will now focus on their next challenge, as they face Pakistan in their next match.

Columnist for The Hockey Paper and the man behind The Top of the D. Writer, podcaster, goalkeeper and BBC Sport man. Used to work for Great Britain Hockey and have covered the sport at every major tournament.
View all posts by thetopofthed →
This entry was posted in London 2012 Men. Bookmark the permalink.