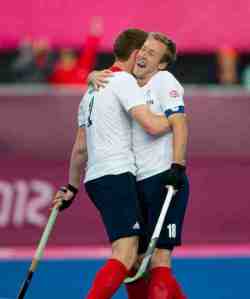 A captain’s performance from Barry Middleton set Great Britain on their way to a perfect start to their Olympic campaign, as they defeated Argentina in a pulsating encounter at the Riverbank Arena.

Santiago Montelli had gone close in the early exchanges as Argentina looked to quieten the home crowd; however it was Great Britain who thought they had drawn first blood during a frantic and energetic opening period. On five minutes, Nick Catlin’s effort was saved by Juan Manuel Vivaldi, only for Matt Daly to despatch the rebound. The Argentineans successfully used their video referral to get the goal ruled out, as the ball was adjudged to have come off Daly’s body.

With the pressure building from the home side, it seemed to be a case of when they would score, not if. Glenn Kirkham was denied by Vivaldi and Ashley Jackson saw his cross cleared by the goalkeeper as they pushed hard for the first goal.

On 22 minutes, they finally broke Argentina’s resistance. Richard Smith’s penalty corner was well saved by Vivaldi; however Barry Middleton brought the ball down and lashed the rebound into the net before anyone else could react.

Moments later, the Argentina goalkeeper was called into action again. A long burst through the middle from Ashley Jackson saw the East Grinstead man through on goal. Vivaldi narrowed the angle and managed to divert the ball wide with his left arm, an excellent save.

The visitors tried to hit back, and could easily have levelled things up. Facundo Callioni left Iain Lewers for dead and rounded James Fair, he was unable to direct his shot on the target and sent it just wide.

As the half drew towards a close things began to get a little heated, as tackles started to come in from all angles. With Nick Catlin in the sin bin, Great Britain ran the clock down to regroup at the break.

Argentina came out for the second half hoping to haul themselves back into the match; however they were blown away by a three-goal blitz in 11 second half minutes.

First, Middleton grabbed his second, linking well with Ashley Jackson before hitting a reverse stick shot through the goalkeeper’s legs. It was a fierce effort, but the No1 will feel he might have done better. 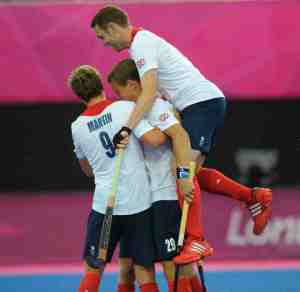 Nick Catlin had another effort saved, but the third goal wasn’t long in coming. Again Jackson was involved as he linked superbly with Dan Fox. Fox found himself in unfamiliar territory as he entered the D; however the Hampstead and Westminster defender showed great composure and drilled the ball into the bottom corner. It was Fox’s first international goal, and the cult hero lapped up the applause from the home crowd.

In the 53rd minute, Richard Smith converted a penalty corner with a low drag flick which Vivaldi got to but couldn’t keep out. Argentina dampened the home crowd’s spirit’s briefly with a penalty corner goal from Pedro Ibarra, however Great Britain were not to be denied and took the three points in relative comfort.

The game was an excellent indication of where Great Britain currently are in their progress. They defended stoutly and kept their opponents to a handful of chances, whilst in attack they created a lot of chances of their own. Their speed on the counter attack and some of their finishing was superb. Their next game is against South Africa on Wednesday.

Columnist for The Hockey Paper and the man behind The Top of the D. Writer, podcaster, goalkeeper and BBC Sport man. Used to work for Great Britain Hockey and have covered the sport at every major tournament.
View all posts by thetopofthed →
This entry was posted in London 2012 Men. Bookmark the permalink.