Two goals from Alex Danson helped Great Britain’s ladies to get off to a dream start in their quest for a gold medal, with a comfortable 4-0 win over Japan. Roared on by an enthusiastic home crowd, the hosts put the game to bed in the first half, scoring all their goals before half time.

Great Britain had already gone close early on when Georgie Twigg saw her reverse stick shot fizz over the bar in the 6th minute.

Just a minute later, Great Britain took the lead. Alex Danson showed good strength to break through a tackle in the D before dinking a delicate reverse stick shot past the on-rushing Sakiyo Asano.

The home side were dominating the match and it took Japan until the 14th minute to register a meaningful attack. Sachimi Iwao drilled the ball across to the back post but Masako Sato sliding in couldn’t get a decisive touch.

Great Britain went close to doubling their lead as Crista Cullen drew a good save from the goalkeeper from a penalty corner. 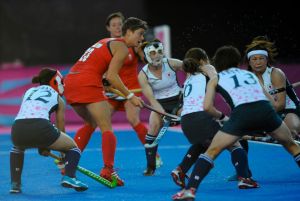 n the 23rd minute, they did get their second. A fine run through the middle by Chloe Rogers began the move, which culminated in Sarah Thomas applying the finishing touch from close range. It was a proud moment for the only Welsh player in the squad.

The home crowd were showing their appreciation for their team’s efforts and didn’t have to wait long for the third goal. Kate Walsh’s drag flick was saved by Asano, but the danger was not cleared. Georgie Twigg found Sally Walton in the D, where the Bowdon Hightown defender produced a finish that any forward would be proud of, her reverse stick flick giving the goalkeeper no chance.

With seven minutes left until half time, Danson grabbed her second, and Great Britain’s fourth. A good pass by Helen Richardson released the talismanic striker who cooly slid the ball home past the helpless Asano.

Despite Japan’s renewed efforts after the break, Great Britain were still creating the better chances. Sarah Thomas couldn’t quite deflect Danson’s cross into the net, and Laura Bartlett had a shot charged down. Crista Cullen was having her own personal battle with Asano as the Japanese goalkeeper did superbly to keep out a penalty corner from the Leicester star. Danson, too was still hunting for her hat-trick and was denied by a fine piece of goalkeeping from Japan’s stand-out performer. When Cullen finally did beat Asano with a drag flick she was frustrated once again, as her shot cannoned back off the post. 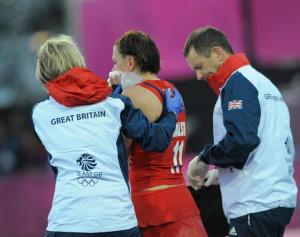 With Japan seemingly accepting their fate and Great Britain happy with what they had, the game began to peter out. However there was still time for the party to be spoiled as captain Kate Walsh left the field bleeding after taking a stick to the face. Minutes later, Helen Richardson also limped off after being hit on the knee. Richardson is expected to recover, whilst Walsh is awaiting the outcome of medical tests.

A superb performance from the home side, which sent a big crowd home happy, they will look to continue their momentum in their next game against Korea.

This entry was posted in London 2012 Women. Bookmark the permalink.