With the Olympics looming large on the horizon, you are probably wondering about the teams that are competing in the tournament. Well, fear not, The Top of the D brings you a team-by-team breakdown of those you’ll see at the Riverbank Arena at the end of this month. Today, we look at Pool A of the men’s competition.

Australia are the world’s number one side and boast an array of talent which would make anyone jealous. An energetic team who press in numbers high up the field, denying their opponents time on the ball and making it very difficult to build attacks from the back. World Cup, Champions Trophy and Oceania Cup holders, they go into the games as the clear favorites. Their group is tricky, with Spain and hosts Great Britain a potential threat, but you would expect them to qualify, after which, the sky’s the limit.

Jamie Dwyer is the obvious one. A five-time World Player of the year, who has won the award for the last three years. His pace and energy, along with some of the best technical skills ever seen make him a huge influence on any game, at any level.

Look out for Chris Ciriello and Kieran Govers, too. With Luke Doerner not selected, the penalty corner responsibilities will fall to them. In a competition where set-pieces can decide success or failure, these two are pivotal.

With the home crowd behind them, much is expected of the host nation. They have named an experienced squad, with 12 players present from the 2009 England team which won the European Gold. A strong, well-drilled side with a number of players now regulars in the European Hockey League, on their day, this is a group capable of producing brilliance. Coach Jason Lee is approaching his fifth Olympic Games, having competed twice as a player (in 1992 and 1996) and as coach at the last two games.

Barry Middleton is one of the most capped players of all time for his country. He has enjoyed spells in Germany and Holland and has grown into one of the best players around. If he is on his game, Great Britain will be well equipped to progress in this tournament.

Ashley Jackson is the other of Great Britain’s genuine all-stars. Another who has spent time playing abroad, Jackson scooped the FIH Young player of the year in 2009, and has over 100 international goals to his name. His ability at penalty corners is absolutely crucial to his team’s chances.

Spain have a forward line that is arguably the best in world hockey: Edi Tubau, Pol Amat and Santi Freixa are three of the most gifted and dangerous players around. Understandably, with that sort of firepower, Spain’s style is largely geared towards getting the ball forward early, and relying on their outrageous ability up top to create something. Of late, the team has been wildly inconsistent: Spain qualified by virtue of South Africa giving up their original place in the tournament. They had finished a miserable 6th in the Eurohockey Nations and were subsequently faced with the prospect of a qualifying tournament until handed that reprieve. They did finish 2nd in the Champions Trophy in December, which begs the question, which Spain will turn up to the Olympics?

As alluded to above, the front three are the real box-office players in the Spain line up. Pol Amat is competing in his 5th Olympic games, at the ripe old age of 34. He still has the pace, the guile and perhaps most importantly, the experience, to win a game in an instant.

Quico Cortés, in goal is no slouch, either. Cortés is an experienced ‘keeper who is capable of the most outrageous displays of agility, which can prove crucial given his team’s tendency to attack. 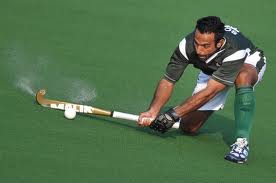 Three Olympic golds, four World Cup golds, history would tell you that Pakistan are one of the teams to beat. History, however counts for nothing in the present day. Their last podium finish was back in 1994 and currently they are in something of a slump, plagued by in fighting and politics. They actually qualified ahead of Malaysia, India and Korea, showing they have an abundance of ability. Since then, they have seemed to self-destruct with the suspension of Rehan Butt, Mohammad Waseem and Shakil Abbasi from selection causing an inexperienced squad to struggle at the Azlan Shah tournament. The selectors have since relented and recalled their “rebels”. It is hard to see them putting the distractions to one side to compete in London, but you never know.

Obviously Sohai Abbas leaps off the page straight away. He may not be the force he once was, but with over 300 international goals to his name, you’d be a fool to ignore him. Rehan Butt and Shakil Abbasi have both featured in FIH All Star teams and have a lot of experience between them. Can they set aside their differences with the selectors and help their younger teammates to a podium finish?

Although they did not qualify for the Beijing games, Argentina’s men have been on a steady up and up over the last couple of years. They managed a solid showing at the World Cup in 2010, finishing 7th, followed by winning the Pan American games in 2011. Perhaps most impressively, they finished 2nd in the 2012 Azlan Shah tournament, narrowly losing out to New Zealand in the final by a goal to nil.

They open up their campaign against hosts Great Britain. Whilst that may seem a daunting prospect, they will be buoyed by the 3-2 win they secured over their rivals at the Azlan Shah tournament. Argentina have nothing to lose in London, and may yet surprise a few people.

Lucas Vila was included in the 2011 FIH All Star team. The 26-year-old striker has played club hockey in Holland for TMHC Tilburg and alongside his brothers Matias and Rodrigo he will be a key factor in Argentina’s chances of progressing.

Pedro Ibarra and rising star Gonzalo Peillat will supply the threat from penalty corners, which,as we already know, means they have an important role to play.

South Africa thought that after winning the Africa Cup they were to take their place in this summer’s Olympics. However, the South African National Olympic Committee had other ideas and insisted they go through a qualifying tournament, which they did, beating Japan 2-1 in the final to snatch the final available qualification slot.

They are the lowest ranked side in the men’s competition and will be desperate to improve on their showing in Beijing where they finished in 12th place. A side with a good blend of youth and experience will be hoping to spring a surprise with their energetic counter-attacking style.

Captain Austin Smith will be familiar to followers of the English Hockey League, playing as he has at Reading. He leads by example and is a calming, experienced presence in the South African ranks.

Justin Reid-Ross was top scorer in the qualifying tournament and has enjoyed an outstanding season in the Hoodfklasse with Pinoke, scoring goals for fun. He is a threat from open play, but will also shoulder the responsibility for their penalty corner goals, too. He is a huge talent who will be pivotal to his team’s hopes.

The Top of the D will post the team-by-team preview for Pool B, and the ladies competition later this week.

Columnist for The Hockey Paper and the man behind The Top of the D. Writer, podcaster, goalkeeper and BBC Sport man. Used to work for Great Britain Hockey and have covered the sport at every major tournament.
View all posts by thetopofthed →
This entry was posted in Features, International Hockey, London 2012 Men. Bookmark the permalink.