And so at 3pm on the 27th of June, the 16 athletes whom Great Britain Coach Jason Lee

feels will bring home the gold medal were finally announced to the world. After 3 years of
working together in the central programme, whittling the whole squad of 27 athletes down to 16 plus two reserves was always going to prove difficult. It is a selection with a wealth of experience and one that contains no Scottish or Welsh players. Barry Middleton will captain the side and plays in his third Olympics. The Top of the D looks at the men in the squad and tells you a little about each:

It’s been a pretty good year for Catlin. He won the Premier League title with his club side, Reading and has now been selected in the squad for the Olympics. At only 23 he still has plenty of international hockey ahead of him, but with 70 international appearances to his name, he is by no means a novice. Catlin, by his own admission lives by the motto: “rise up and act like a man.” He’ll be hoping to rise up onto that podium come the end of the games.

Clarke, who is closing in on 200 international appearances is one of the players who offers the side something a bit different. He has excellent technical skills and the ability to beat players in even the tightest of spaces. His goal return is not to be sneezed at for this level either, scoring 54 goals since he made his international bow in 2002. His experience and his flair will make a big difference to Great Britain’s chances.

Daly has just returned from a long-term injury. It is thought that part of the reason the Great Britain squad has been named so late was to give Daly as much chance of making the tournament as possible. That should tell you all you need to know about his ability. Daly has 58 international goals to his name and his abilities in and around the circle make him a dangerous player.

With a total of 130 appearances for England and Great Britain, Fair is the most experienced of the three goalkeepers in contention. An outstanding shot stopper who is reliable and composed between the sticks. You rarely see the Cannock No1 put a foot wrong. He was voted goalkeeper of the tournament in the 2009 EuroHockey Nations Championship, a tournament where he also picked up a gold medal.

We should have known Fox had made the squad. As pointed out on Twitter itself this afternoon, he has been rather lively on the social media outlet this past week, suggesting he was rather excited about something. We know what that is, now. As what I have just written suggests, Fox is a popular member of the squad who seems to have a sense of humour about him. It’s a good job he can play a bit too, really. He is a relative latecomer to the international scene, with just 17 Great Britain and 23 England caps to his name. He has played in two Champions Trophies and a World Cup, though, so this will not be new to him.

London 2012 could prove to be a fairy tale swansong for the former Great Britain captain. Hawes has overcome a string of injuries and taken the long road back to making it into the squad. He has a wealth of experience, notching up 125 England caps and 88 GB caps. He has also netted 45 times in international hockey, which is not a bad return for a largely defensive player. Going into his 3rd Olympic tournament, he will put to good use the skills he honed as a youngster on the hallowed turf of the Southdown Club, Lewes. 🙂 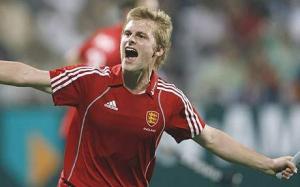 Like Middleton, Jackson has benefited from his spell playing in the Hoofdklasse, where he went from being a promising young player to a genuine world star. He has picked up awards and accolades throughout every stage of his career. One of the best exponents of the drag flick, he will carry Great Britain’s main goal threat. Indoor and outdoor, he has over 100 goals in 150 international appearances. However, he is a lot more than just a penalty corner weapon. His all round game, energy and ability to link play together makes him pivotal to his team’s chances.

234 international appearances, one Olympic games, 18 international tournaments, his debut back in 2003, it is fair to say Kirkham is an experienced member of the squad. One of his strengths is the ability to go about his business with a quiet authority. You won’t see Kirkham grabbing the headlines, but what you will see is a player who keeps the opposition quiet and who brings his teammates into the game with efficient and accurate passing. You don’t often see Kirkham give the ball away. He might not be all pyrotechnics and flair, but he is an excellent technical player who is extremely important.

That’s the first 8 of the squad taken care of. For the remaining eight, click here.

Columnist for The Hockey Paper and the man behind The Top of the D. Writer, podcaster, goalkeeper and BBC Sport man. Used to work for Great Britain Hockey and have covered the sport at every major tournament.
View all posts by thetopofthed →
This entry was posted in Features, International Hockey, London 2012 Men. Bookmark the permalink.