Australia snatched a dramatic winner with the last play of this absorbing encounter to break German hearts and take their place in the final against the Netherlands.

Germany took the lead in the 5th minute with a fantastic individual goal from Maike Stockel. They almost doubled their lead in the 9th minute however Tony Cronk saved well from a Hannah Kruger drag flick to keep the score at 1-0.

Australia were pressing very high up the pitch ensuring their opponents did not get time to settle on the ball, however the Germans showed terrific composure, transferring the ball with superb speed and accuracy around the back and into midfield. 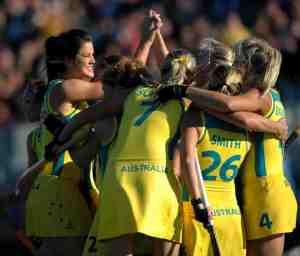 On 25 minutes Australia forced their first penalty corner. Jodie Schulz’s effort went wide of the target. On 32 minutes, they had a gilt-edged opportunity to equalise, Kristina Reynolds was out smartly to block the shot and then down well to keep out Schulz from the resultant penalty corner.

Half time came and went and the Australians came out strongly at the start of the second period. Schulz went close again from a penalty corner, but at the other end, Tony Cronk had to be alert to keep out a dangerous ball from Fanny Rinne.

With the pressure from the Australians building, Germany snatched another goal. Natascha Keller’s shot was forced home from close range by Eileen Hoffman with Cronk agonizingly close to keeping it out.

Just five minutes later, Australia hauled themselves back into the match; Emily Smith continued her fine goal scoring run, calmly sweeping the ball over Kristina Reynolds from near the penalty spot.

Australia’s tails were now up and Jade Close’s energy and tireless running was starting to fluster the German back line. With five minutes to play, Kobie McGurk grabbed the equaliser. A fierce low shot which Reynolds will be disappointed to have let slip through her legs.

Germany forced a penalty corner and Janne Muller-Wieland’s shot nestled in the net, however despite the crowd’s cheers it was too high as it had not hit the backboard.

The crowd were licking their lips at the prospect of another penalty-shootout; yet Australia forced a corner on the whistle. The initial effort from Schulz was charged down by a defender’s foot, so a re-award was given. This time Anna Flanagan went low to Reynolds’ right and found the corner to give her side the most dramatic of victories and a place in Sunday’s final.

German captain Fanny Rinne rued her side’s willingness to win the game: “Maybe we shouldn’t have pushed for a winner, maybe we should have settled for penalties. Sometimes if you push forward you leave yourselves open to a counter, that’s what happened today to us.”

Adam Commens, Australia coach was pleased but refused to get carried away: “We started poorly but were able to build our way into the game. I’m pleased we won, but I feel we missed an opportunity to progress today. We can be much better than this and hopefully will tomorrow.”

Australia face the Netherlands in the final whilst Germany will play South Africa in the 3rd/4th place play off.