A goalkeeping master class in the first half from Ireland’s Emma Gray looked for a while like it would frustrate the Dutch here in London, but in the end, their class showed as they ran out comfortable 5-0 winners.

With Martje Pauman rested, it was a slightly changed line-up, however Naomi Van As was still on hand to pull the strings in midfield and remind everyone what a class act she is.

Indeed, it was Van As who had the first effort on goal, a neat pirouette and reverse stick shot was well saved by Gray who also got good distance on the clearance.

The pattern for the half had been set, with the Dutch probing and looking for an opening whilst the Irish sat deep trying to hold them off and pick up scraps on the counter attack. Eva de Goede was kept out by Gray from a penalty corner and 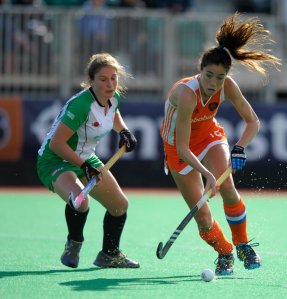 Kitty van Male was frustrated by the excellent Ireland number one twice in quick succession, the second an excellent sprawling save from close range. The game was fast becoming Gray vs. the Netherlands, this time she brilliantly denied Caia van Maasakker from yet another penalty corner. It was starting to look like the sides were going in at the break level. However, with just three minutes left on the clock, Gray was finally beaten. She made a superb block, but was powerless to prevent the rebound being despatched by an excellent reverse stick shot from Kelly Jonker. It was tough on Gray who had been the game’s stand out player, but was probably no more than the Dutch deserved.

Pamela Smithwick replaced Gray at half time, a move which Coach Denis Pritchard later said had been planned for 2 weeks. It took the Oranje just three minutes to beat the replacement goalkeeper. A slightly messy goal, with the ball bobbling around the D before being forced home from close range by Jonker for her and her team’s second of the match. Marilyn Agliotti also went close with a snap shot on the turn which went just wide and with a slapped penalty corner which the Irish dealt with well.

Ireland were finding it hard to make any attacking inroads, their energies largely focused on defending, which meant when they did break, support was in short supply.

After 15 minutes of the half, Agliotti got her goal, deflecting home from close range after some neat interplay on the baseline.

With the score at 3-0, The Netherlands went into cruise control, holding on to possession with a series of passes around the back, whilst the Irish retreated to a half court press to ensure they did not concede any more goals. With the team visibly tiring, Ireland started to leave gaps at the back, which the Dutch were able to take advantage of, scoring two more goals in the 65th and 67th minutes. Ellen Hoog added her name to the score sheet, and Jonker completed her hat-trick to make the final score 5-0.

Max Caldas was understandably very satisfied in the press conference: “I’m pretty happy with how the game went. We had to patient and wait for our goal, which is something we’ve got better at in the last year or so.” Caldas will soon have to trim his squad from 23 to 16, and admitted that making the decision on whom to leave out was “very stressful.”

Denis Pritchard, the Irish coach was not too disappointed despite the margin of defea;, “We tried to control areas where they would get a lot of the ball, which I thought we did very well in the first half. Obviously we are not at our peak at the moment, so once we started to tire; a side of their quality was always going to exploit the gaps.”

Ireland face Great Britain in the 5th/6th playoff on Sunday whilst The Netherlands face South Africa in the Semi-Final on Saturday.