A strong performance for the Hockeyroos gave them their first win of the competition as they ran out comfortable 4-1 winners over a spirited Ireland.

They had already gone close with a Casey Eastham reverse stick shot on 2 minutes when they went one better and went ahead. Some slick interplay around the D and a good advantage from the umpire resulted in Fiona Boyce finding time and space at the back post to give her side the lead.

Australia were dominating proceedings, but Ireland’s Nicola Daly looked bright and enterprising in the opening exchanges, her skill and pace giving Jodie Schulz plenty to think about as she tried to create chances for her teammates.

With Ireland still struggling to get a foothold in the contest, Australia struck their second of the match. Again, time and space was afforded at the back post, and this time Emily Smith was the beneficiary, sweeping home from close range.

As in the previous contest with the Dutch, Anna Flanagan and Kobie McGurk were providing a splendid defensive display as any flicker of Irish threat was snuffed out by those two. Daly was still doing her utmost to cause the Hockeyroos a problem but was finding support to be in short supply in the final third.

On 19 minutes, Australia struck another blow, this time from a penalty corner. Jodie Schulz’s powerful drag flick whizzed into the roof of the net giving Emma Gray, making her 50th appearance in goal for Ireland, little chance.

Minutes later, Schulz had another chance, this time opting to go low, only to be kept out by a combination of Gray and the defender on the line. Ireland’s best hope still seemed to be to hit on the break, a strong run by Anna O’Flangan down the right deserved better but her final pass went astray with Nicola Evans trying to find space in the D to receive it. 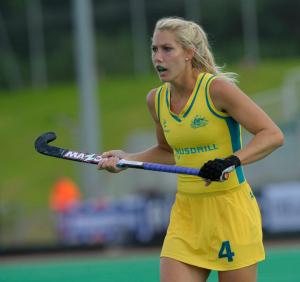 into their own 25 as they hunted for a fourth. Megan Rivers went close and Schulz was denied from another penalty corner as the Irish were in danger of sinking without trace. On 48 minutes, Australia got their fourth. Casey Eastham was credited with the goal, although who got the final touch was unclear as two Australians slid in with a defender the ball deflecting over Gray and in off the post for 4-0.

Australia were forcing a number of penalty corners, but were found the heavily watered pitch made life difficult for the injector. Their efforts were either charged down, or under extreme pressure, allowing Gray to keep the score down with a number of saves.

Ireland began to assert themselves more as an attacking force as the half wore on, and on 58 minutes Daly grabbed a consolation her efforts richly deserved. They could easily have forced a second, but were well kept out from a penalty corner and then an Anna O’Flangan deflection, both repelled by Ashlee Wells in the Hockeyroos goal. Australia had one more corner at the final whistle, but once again, the shot from Schulz was charged down before Jade Close was blocked and the ball was cleared, meaning the game finished 4-1.

Ireland coach Denis Pritchard said: “Overall I’m pleased with our response today. The power of their running and the Australian strength on the ball caused us problems, but i thought we adjusted very well second half. Our aims in this tournament are different to the other teams, if we can improve individually by 10-15% I will be very happy.”

Adam Commens was once again very positive: “It was great to get the early goals, which is something we couldn’t do yesterday. I’m disappointed that we fell away after a good start but i thought we used the width and length of the pitch better, and our ball security up front was improved, so overall i’m very happy.”

Ireland play their next match against The Netherlands on Thursday.